Forty-two deaths have been confirmed from the collapse of a motorway bridge in the Italian city of Genoa.

Rescuers are scouring the wreckage of Italy's bridge collapse as the death toll climbed to 42 and the government blamed the bridge's private owner, demanding resignations.

The 50-year-old bridge, part of a toll motorway linking the port city of Genoa with southern France, collapsed during torrential rain on Tuesday, sending dozens of vehicles crashing onto a riverbed, a railway and two

As cranes moved in to shift truck-sized chunks of broken concrete, hundreds of firefighters searched for survivors, while public shock and grief turned to anger over the state of the 1.2 km-long bridge, completed in 1967 and overhauled two years ago.

The condition of the bridge, and its ability to sustain large increases in both the intensity and weight of traffic over the years, have been a focus of public debate since the collapse, when an 80-metre span gave way as cars packed with holidaymakers as well as trucks streamed across it.

Deputy Prime Minister and Interior Minister Matteo Salvini said the private sector manager of the bridge had earned "billions" from tolls but "did not spend the money they were supposed to" and its concession should be revoked.

He was apparently referring to the bridge's concession-holder, Italian motorway firm Autostrade, a unit of Atlantia group.

"Imposing the highest penalties possible and making sure that those responsible for the dead and the injured pay up for any damages and crimes is the very least," he said.

Fire brigade spokesman Luca Cari said 400 firefighters were at the site, lifting big chunks of concrete to create spaces for rescue teams to check for survivors. 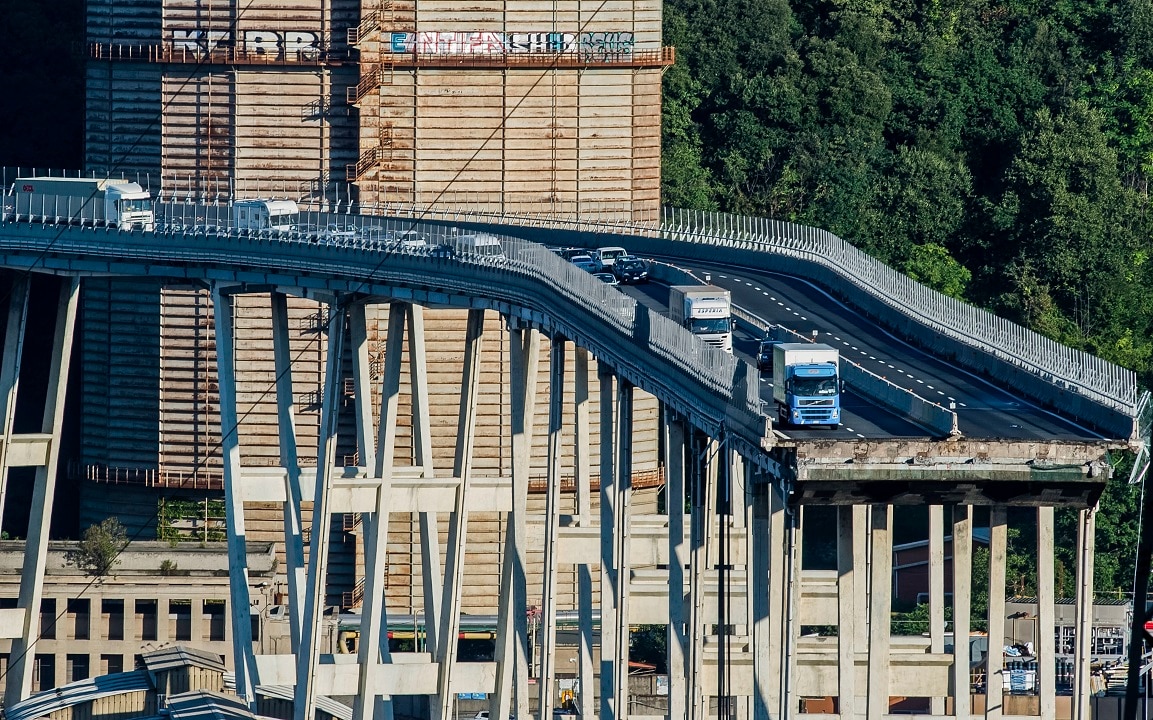 Cars and trucks are left on a section of the collapsed Morandi highway bridge in Genoa.
AAP

Italy's transport minister said on Wednesday he had begun a process to strip Autostrade of its concession and he demanded top Autostrade managers resign.

"Autostrade per l'Italia was not able to fulfill its obligations under the contract regulating management of this infrastructure," Danilo Toninelli said on RAI 1 state TV, adding that he would also seek to levy heavy fines against the company.

"I have given mandate to my ministry to start all proceedings to apply the agreement, that is to revoke the concession from these companies and seek significant sanctions which can reach up to 150 million euros ($A235 million) based on the terms of the contract."

Atlantia and Autostrade did not immediately respond to requests for comment.

The Morandi Bridge, named after the engineer who designed it, forms part of the A10 motorway run by Autostrade. The 55km stretch of the A10 accounts for around 1.7 per cent of total network traffic for Italy's biggest toll road operator, according to one analyst's estimate.

"The top management of Autostrade per l'Italia must step down first of all," Toninelli said in a Facebook post.

He also the government would inspect the structure of ageing bridges and tunnels across the country with a view to launching a program of remedial works if required.