Diners are making the #IWillEatWithYou pledge as Chinese businesses struggle with a downturn in patronage following the spread of coronavirus.

Restaurant-goers are being urged to pay a visit to their local Chinese restaurants after fears over the coronavirus saw a number of businesses report a sharp downturn in trade.

Some businesses claim they've lost up to 50 per cent of income due to misinformation and unqualified concern about the virus' spread.

The group, which claims to have more than one million members across the country, has written to its followers to urge hungry Australians to dine out and enjoy the best local Asian cuisine.

"Panic around the virus is unfairly impacting Chinese and Asian communities.

"If we don't take action – people will lose their jobs, and their livelihoods." But earlier this month, Steven Zheng told SBS News his business had more than halved, prompting him to urge casual staff to consider looking elsewhere for work.

All the bonkers racism & hysteria over #coronavirus is putting wonderful people out of business. We haven’t stopped getting our weekly treats because quite frankly this food is too good to miss & we support our friends! #IWillEatWithYou pic.twitter.com/2Z8g91jyp6

Richard Shi, another small business-owner in Box Hill, also told SBS News that trade at his store, Sweet Kingdom, had dropped by more than 40 per cent, amounting to about $1,000 in lost revenue each day.

“In the centre, you can see it's basically empty when usually it's chockers,” he said.

I've been eating food delivered from Asian restaurants every night (Isolating myself for 2 weeks as govt asked arrivals from China to do).

Asian restaurants are going under from scaremongering about #Coronavirus. Please pledge #IWillEatWithYouhttps://t.co/IjTf7jFyNg @GetUp

UNSW Associate Professor Garrett Prestage took to social media to confirm his recent visit to one of Sydney's most popular dining districts was far quieter than expected.

"How bloody irrational can people be!?!" he posted online.

"We were just in Chinatown this evening and it's true - almost deserted, with many places closed."

It's hoped greater awareness of challenges facing Chinese outlets will prompt their return to former glory. 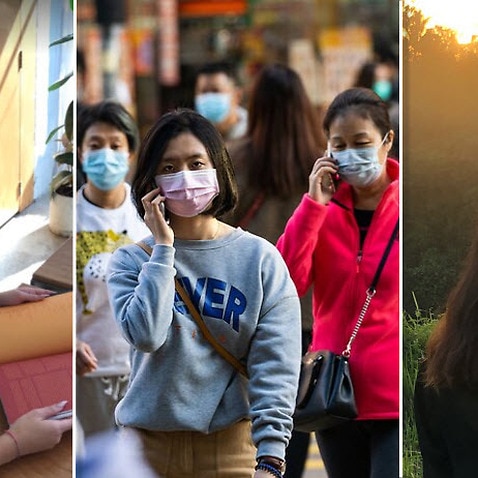 Queensland diner Jan Wild is among those hoping to make a difference one plate at a time.

"I will eat at an Asian restaurant this week, will you?"

Melbourne mother Susie Cole took to Facebook to share an image of her family enjoying a meal at a local Chinese restaurant.

"Last week our family...ate at Harmony(Chinese) restaurant & had no qualms about coronavirus or anything else," she wrote.

The #IWillEatWithYou name is inspired a viral public gesture of unity following the Sydney Lindt Cafe siege in 2014.

Thousands of messages of support were posted online as Australians backed those from the Muslim community in the wake of the incident with saw 18 people taken hostage and left three people dead, including the perpetrator.

Facebook user Rachel Jacobs prompted the #IllRideWithYou movement by taking to Facebook to recount her experience sitting next to a woman who silently removed her hijab while sitting on public transport.

"I ran after her at the train station. I said 'put it back on. I'll walk with u'. She started to cry and hugged me for about a minute - then walked off alone."