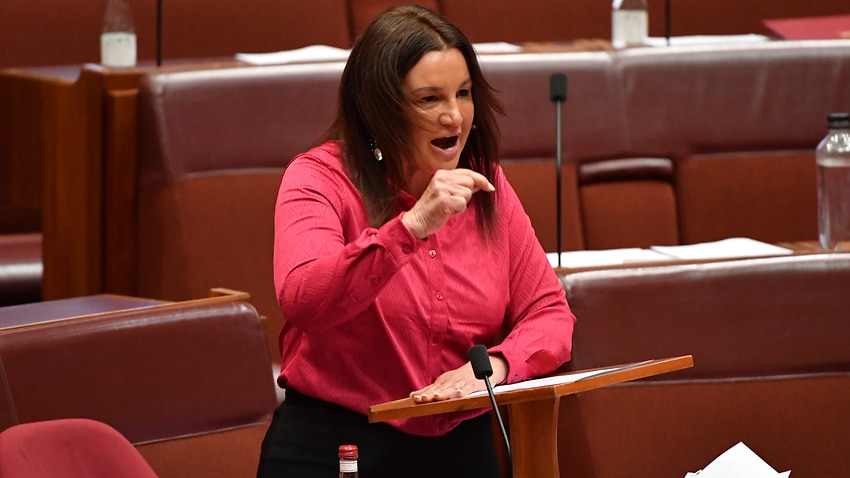 Independent Senator Jacqui Lambie has fiercely attacked One Nation's push to remove vaccine mandates, blasting the party's claim people who are unvaccinated are discriminated against.

Five Coalition senators crossed the floor to back legislation put forward by One Nation leader Pauline Hanson on Monday attempting to ban mandatory vaccination rules, which was ultimately defeated.

But in a fiery rebuke to Senator Hanson's bill, Senator Lambie accused One Nation of seeking to "profit" from discrimination and using fear to boost its election campaign.

“If you want to champion against discrimination, you don’t want One Nation."

Senator Lambie said she does not support forcing people to be vaccinated, but did not support the bill because the decision to not get vaccinated was not "consequence-free".

"Being held accountable for your own actions isn't called discrimination - it is called being a bloody adult," she said.

"You have the freedom to make a choice, but those choices have consequences."

Addressing parliament by video link, Senator Hanson said vaccine mandates had unleashed a "pandemic of discrimination" as she tried to talk up vaccination side effects and unproven COVID-19 treatments.

Read More
Australia reaches vaccination milestone, but these communities are still at risk

The concerns raised in the bill relate to state-based vaccine mandates that require proof of vaccination for certain jobs and to attend venues such as cafes, restaurants and bars.

Senator Hanson took aim at state premiers for introducing mandates, saying her bill was about ensuring people's "rights and freedoms".

"This prime minister has done nothing to prevent this pandemic of discrimination," she told the Senate.

Read More
As Australia reopens, COVID-19 cases will rise. How will we cope?

Prime Minister Scott Morrison later said his government opposed the bill but defended Coalition senators who had supported the move.

"You should not need to undergo a medical procedure to earn a living," he told the Senate.

"What the hell happened to 'my body, my choice'?"

The government's legislative agenda is facing a potential roadblock in the Senate, with Senators Rennick and Antic saying they will withhold their votes over their vaccine mandate concerns.

Senator Hanson had also promised to cause "mayhem" for the government over the issue.

Senator Rennick said while many jurisdictions had implemented mandates, he wanted the commonwealth to overrule states and territories.

"Where there is a risk there must be choice," he told the Senate.

The senator called for the government's indemnity scheme to be expanded and said people who listened to the government had been scorned.

Labor Senator Kristina Kenneally earlier also launched a scathing rebuke, saying the government had "dog whistled to extremists" for even allowing the bill to be debated.

"The prime minister is pandering to these extremist elements," she told the Senate.

"Australians are not being discriminated against and coerced, it is their choice whether or not to be vaccinated."

Mr Morrison said the government supported mandatory vaccines for health, aged care and disability workers where they are "working with vulnerable people", but not more broadly.

"When it comes to what happens in somebody's business, we believe [a] business should make that decision and shouldn't be told by the government what they should be doing," he told Question Time.