Democratic presidential candidate Joe Biden has blasted President Donald Trump’s response to US protests over racism and police misconduct, vowing to try to heal the country’s racial divide and not “fan the flames of hate.”

Presumptive Democratic presidential nominee Joe Biden accused President Donald Trump on Tuesday of turning the United States into a "battlefield riven by old resentments and fresh fears" and pledged to try to heal racial divisions if elected to the White House in November.

"The moment has come for our nation to deal with systemic racism," Mr Biden said in Philadelphia in his first major speech outside his home state of Delaware since the coronavirus pandemic gripped the country in March.

"We are in a battle for the soul of this nation."

The President held up a bible at St. John’s church yesterday. If he opened it instead of brandishing it, he could have learned something:

That we are all called to love one another as we love ourselves.

That’s hard work. But it’s the work of America.

The 77-year-old former vice president condemned the use of force by police on Monday evening against demonstrators outside the White House protesting last week's killing of a black man, George Floyd, by a white police officer in Minneapolis.

"When peaceful protesters are dispersed by the order of the president from the doorstep of the people's house, the White House, using tear gas and flash grenades, in order to stage a photo op, a photo op, at one of the most historic churches in the country... we can be forgiven for believing that the president is more interested in power than in principle," Mr Biden said.

"The president held up the Bible at St John's Church yesterday," he added.

"I just wish he opened it once in a while instead of brandishing it. If he opened it he could have learned something."

George Floyd’s last words. But they didn’t die with him. They’re still being heard. They’re echoing across this nation.

It’s a wake-up call for all of us. pic.twitter.com/q6kARnpJqU

"Donald Trump has turned this country into a battlefield driven by old resentments and fresh fears," Biden continued. "He thinks division helps him.

"His narcissism has become more important than the nation's wellbeing that he leads."

"The action will not be completed in the first 100 days of my presidency if I'm fortunate enough to be elected, or even in my entire term," he said. 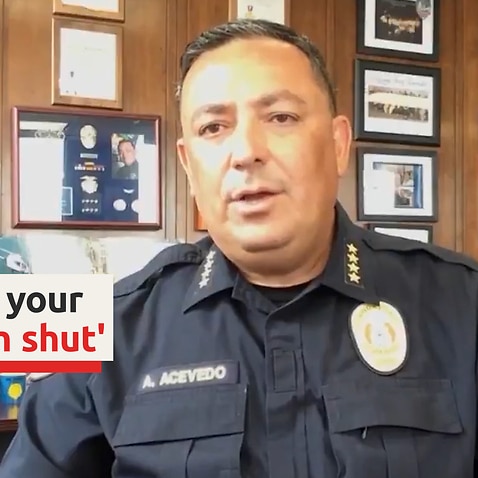 "It's going to take the work of a generation."

Mr Biden met anti-racism protestors on Sunday as he seeks to reignite his presidential campaign after weeks of coronavirus sequestration.

Tuesday's speech in Philadelphia was just the third public appearance by Mr Biden, who served for eight years as vice president to Barack Obama, America's only black president, since the COVID-19 pandemic began in mid-March.

Mr Biden is popular among African-Americans, a key electorate for any Democrat hoping to win the presidency, and his then-flagging campaign for the Democratic presidential nomination was revived by black voters in the South Carolina primary in late February.