Israeli airstrikes have hammered the Gaza Strip after a week of violence that has killed more than 200 people, the large majority Palestinian, despite international calls for de-escalation.

US President Joe Biden told Israeli Prime Minister Benjamin Netanyahu on Monday that he backs having a ceasefire in the bloody exchanges between Israelis and Palestinians, but he stopped short of openly demanding a truce.

In a phone call with the Israeli prime minister, "the president expressed his support for a ceasefire and discussed US engagement with Egypt and other partners towards that end," the White House said.

Mr Biden has so far resisted joining other world leaders and much of his own Democratic party in calling for an immediate ceasefire in Israel. 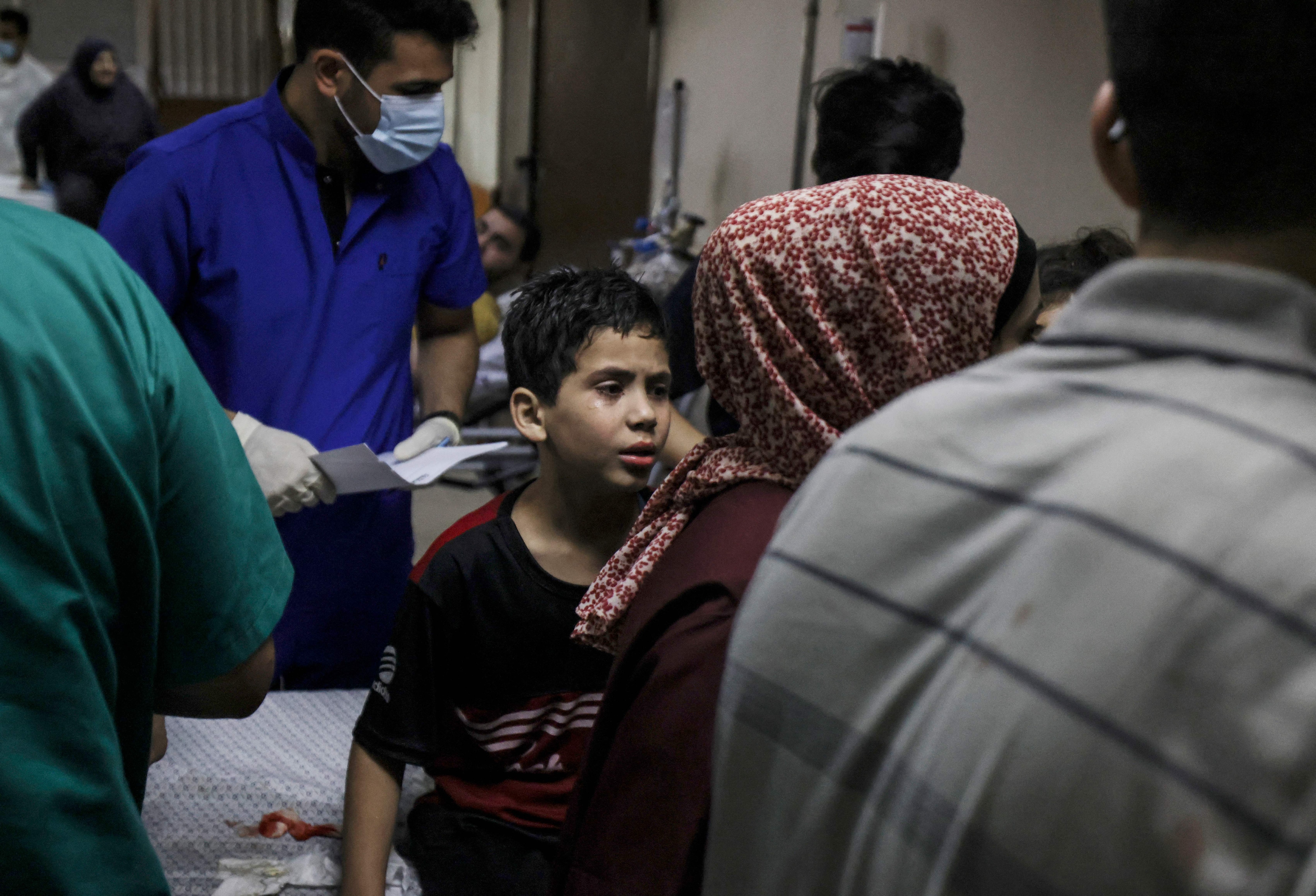 A Palestinian child receives treatment at the Al-Shifa hospital after the death of family members in an Israeli air strike in Gaza City on 17 May, 2021.
Getty

In a statement, the White House said Mr Biden reiterated what has been his main message so far: "his firm support for Israel's right to defend itself against indiscriminate rocket attacks."

Mr Biden "encouraged Israel to make every effort to ensure the protection of innocent civilians," the statement said.

But the White House has steered clear of condemning any aspect of the ongoing Israeli military strikes, saying that the close US ally is justified in responding forcefully to Hamas rocket volleys.

Officials have suggested that more critical views are being relayed in private.

It comes as Israeli jets kept up a barrage of airstrikes against the Palestinian enclave of Gaza on Monday evening, as a week of violence that has killed more than 200 people shows no signs of relenting.

Air strikes sent dust clouds billowing into the skyline, as the Hamas militant group that controls the densely populated coastal strip threatened more rocket strikes on Tel Aviv if bombing of residential areas does not stop.

US President Joe Biden announced he would talk with Israeli Prime Minister Benjamin Netanyahu on Monday evening, shortly after diplomats said Washington had blocked a third draft of a UN Security Council resolution calling for an end to the violence.

#NorwayUNSC , Tunisia & China will once again raise the #MiddleEast crisis on the 🇺🇳 #SecurityCouncil agenda tomorrow/Tuesday.

The situation on the ground continues to deteriorate. Innocent civilians continue being killed&injured.

The UN Security Council is to hold a new emergency closed-door meeting on the Israeli-Palestinian conflict on Tuesday, the Norwegian diplomatic mission announced on Twitter.

"The situation on the ground continues to deteriorate. Innocent civilians continue being killed and injured. We repeat: stop the fire. End hostilities now," the delegation said. Gaza resident Roba Abu al-Awf, 20, said she was bracing for a rough night.

"We have nothing to do but sit at home," she said. "Death could come at any moment - the bombing is crazy and indiscriminate."

Palestinian militants have for their part fired 3,200 rockets toward Israel since the conflict escalated on 10 May in the heaviest exchange of fire in years, sparked by unrest in Israeli-annexed east Jerusalem.

The Qatari Red Crescent said an air strike damaged its offices in Gaza on Monday, while the health ministry said one of its buildings and a clinic were also hit.

Israel's army said on Monday it had hit the homes of nine "high-ranking" Hamas commanders overnight, a day after bombing the house of Yahya Sinwar, head of the group's political wing. It gave no details of any casualties. Fighter jets also hit what the Israeli army calls the "Metro," its term for Hamas' underground tunnels, which Israel has previously acknowledged run in part through civilian areas.

The strikes come a day after 42 Palestinians in Gaza - including at least eight children and two doctors, according to the health ministry - were killed in the worst daily death toll in the enclave since the bombardments began.

Local authorities say a total of 200 Palestinians have been killed in Gaza, including at least 59 children, and more than 1,300 wounded since Israel launched its air campaign against Hamas in response to rocket fire. 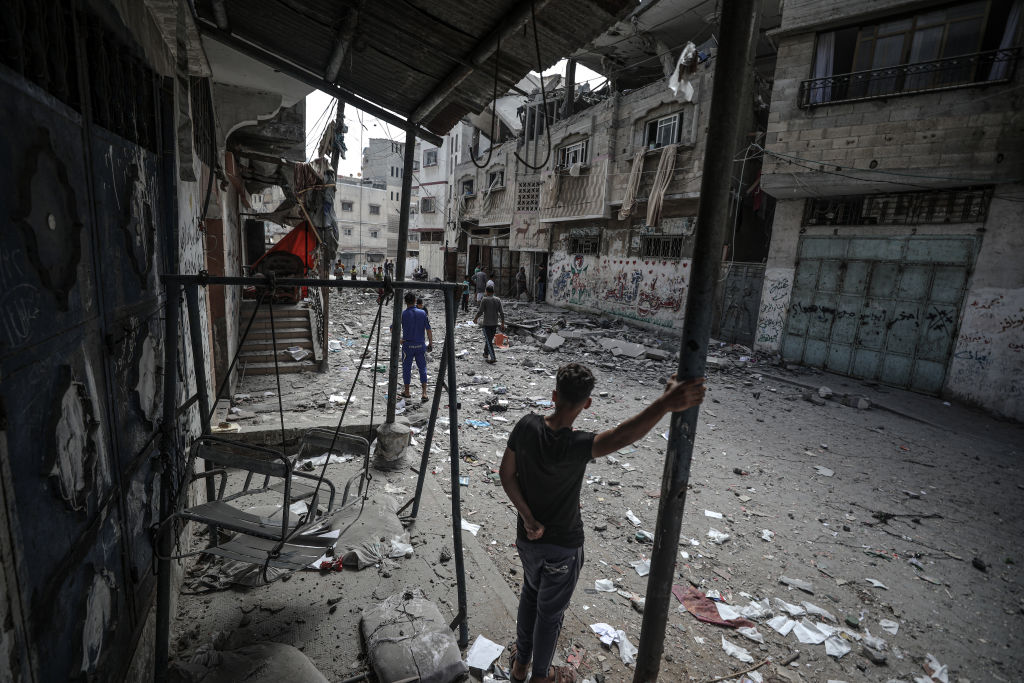 Israeli air strikes hammered the Gaza Strip Monday after a week of violence that has killed more than 200 people, the large majority Palestinian.
Anadolu

Israel says 10 people, including one child, have been killed and more than 300 wounded by the rocket fire that has been among the most intense to ever rain down on Israel.

Israeli bombardment of Gaza has displaced 38,000 people and made 2,500 homeless, the United Nations says.

It has also battered crucial infrastructure, with the electricity authority on Monday warning it only had enough fuel left to provide power for another two to three days.

On Saturday, Israel gave journalists from Al Jazeera and AP news agency an hour to evacuate their offices before launching airstrikes, turning their tower block into a pile of smoking rubble.

US Secretary of State Anthony Blinken said Monday he had requested "details" and a "justification" for the strike.

Spoke today with UAE Foreign Minister Abdullah bin Zayed about the urgent need to halt the violence in Israel and the West Bank and Gaza. The loss of life from this crisis is deeply saddening, and it is imperative to restore calm and end this conflict.

The violence between Hamas and Israel is the worst since 2014, when Israel launched a military operation on the Gaza Strip with the stated aim of ending rocket fire and destroying tunnels used for smuggling.

That war left 2,251 dead on the Palestinian side, mostly civilians, and 74 on the Israeli side, mostly soldiers.

UN Security Council talks that opened Sunday have resulted in little progress, with Washington on Monday blocking for the third time a draft resolution calling for a halt to the violence.

Mr Biden's administration says it is working behind the scenes, and that a Security Council statement could backfire.

When asked whether he would join international calls for a ceasefire, Mr Biden told reporters at the White House Monday evening Israeli time "I will be speaking with the (Israeli) prime minister... and I'll be able to talk to you after that."

Mr Biden's national security advisor Jake Sullivan said he had spoken to his Israeli counterpart and the Egyptian government - a key intermediary - on Monday, saying that Washington was engaged in "quiet, intensive diplomacy." 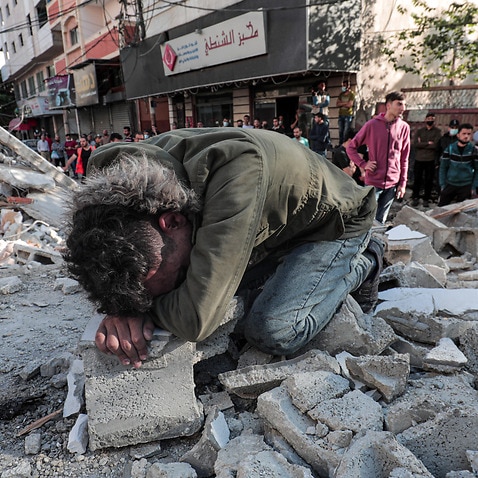 Germany's Chancellor Angela Merkel voiced "solidarity" with Israel in her own call with Netanyahu on Monday, reaffirming Israel's "right to defend itself" against rocket attacks - a line likewise consistently taken by Washington.

But Turkey's President Recep Tayyip Erdogan accused the US president of having "bloody hands" due to his support for Israel.

US envoy for Israeli and Palestinian affairs Hady Amr was in Ramallah on Monday and met with Palestinian Authority president Mahmud Abbas, who urged Washington to act against "Israel's aggression," the official Wafa news agency reported. Israeli air strikes have hammered the Gaza Strip after a week of violence that has killed more than 200 people, the large majority Palestinian.
Anadolu/Getty

Israel is also trying to contain inter-communal violence between Jews and Arab-Israelis, as well as unrest in the occupied West Bank, where Palestinian authorities say Israeli forces have killed 19 Palestinians since 10 May. 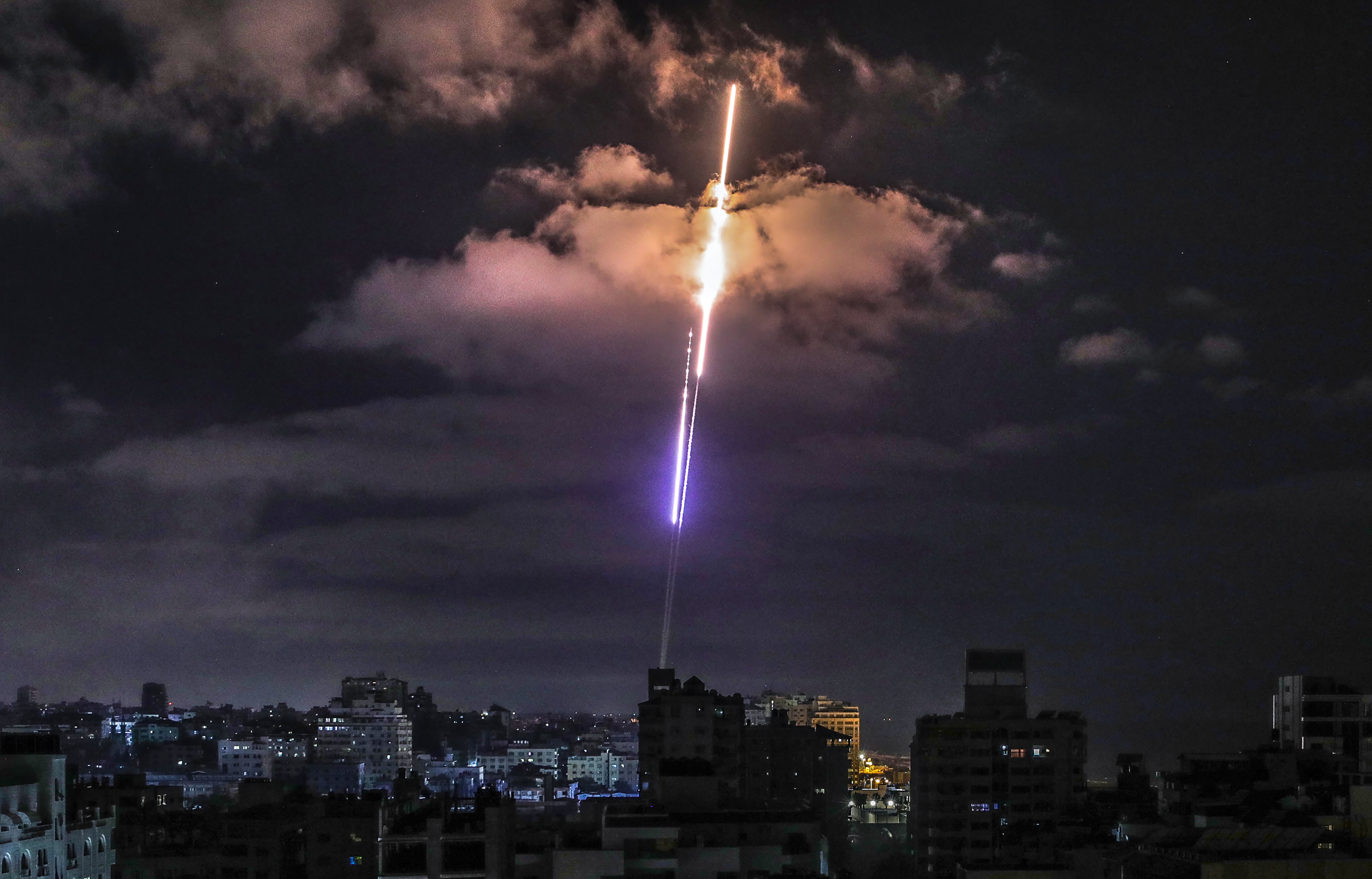 Israeli air strikes have hammered the Gaza Strip after a week of violence that has killed more than 200 people, the large majority Palestinian.
EPA

A 56-year-old Israeli man who was beaten by Arab suspects in the city of Lod last week died in hospital on Monday, police said.

Clashes broke out at Jerusalem's Al-Aqsa mosque compound - one of Islam's holiest sites - on 7 May after Israeli forces moved in on worshippers.

This followed a crackdown against protests over planned expulsions of Palestinians in the Sheikh Jarrah neighbourhood of Israeli-annexed east Jerusalem.