"If the bank inquiry is not a proper bank inquiry then I would have to think, why don’t i just disrupt and cause mayhem until we get some decent government in this country?"

Queensland crossbencher Bob Katter has met with Scott Morrison and demanded tougher action on the banks and the drought, warning he could use his balance-of-power position to cause “mayhem” unless his concerns are addressed.

If the government loses the upcoming by-election in Malcolm Turnbull’s former seat of Wentworth, it could find itself relying on Mr Katter to guarantee supply and confidence in the Lower House.

Mr Katter told reporters his demands were not a “quid pro quo”, but left the door open to causing “mayhem” if the Morrison government did not take action in key areas. 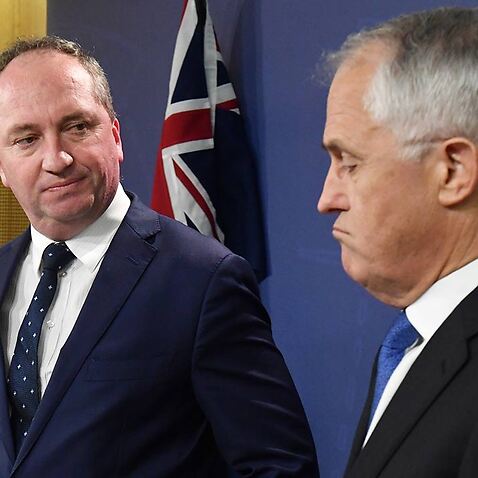 “I think the government, installed by the governor general, is entitled to stability,” Mr Katter told reporters at Parliament House.

“But if the starvation of our First Australians continues, if the drought, which is imposed by the government because they won’t [build dams] continues, and if the bank inquiry is not a proper bank inquiry, then I would have to think: why don’t I just disrupt?”

He said he might be willing to “cause mayhem until we get some decent government in this country”.

SBS News asked Mr Katter how his demands were different to a quid pro quo.

“Look, whether you want to call it a threat or not,” Mr Katter said.

“You can look at my history and you can say, 'yeah righto, this bloke's given each of these [prime ministers] a fair go, and when he didn't get a fair go, then it was mayhem time’.”

Mr Katter revealed he met with the prime minister on Monday to discuss his concerns.

If the Liberals lose Wentworth they will lose their one-seat majority in the House of Representatives.

They would then need the three independents in the Lower House – or four if another took Wentworth – to guarantee its authority to govern in minority.

Independent Cathy McGowan said her “predominant feeling” was that the Coalition should be allowed to govern until the next election.

“Good government, get the ship turned around, do your next six months, have an election and let the people decide,” Ms McGowan told ABC Radio.

She said she would “renegotiate” with the prime minister after the by-election result was known.