The government has confirmed its "default position" will be to send sick refugees to Christmas Island.

Independent MP Kerryn Phelps has blasted the government's plan to send sick refugees and asylum seekers from Manus Island and Nauru to Christmas Island, rather than hospitals on mainland Australia.

Ms Phelps said it was a subversion of democracy as the intention of the medevac legislation was to provide sick people in offshore detention treatment on the mainland.

This is a subversion of our entire model of representative democracy. The parliament through its proper processes clearly determined that people too sick to receive treatment in offshore detention should come to Australia, not Christmas Island, for specialised treatment #auspolhttps://t.co/PKYxTffUn2

In response to the passing of the contentious medevac bill against the government's wishes, Prime Minister Scott Morrison announced plans to reopen the Christmas Island detention centre at a cost of more than $1 billion.

Home Affairs Minister Peter Dutton confirmed on Tuesday morning that the "default position" would be to send anyone approved for medical transfer under the new legislation to Christmas Island. 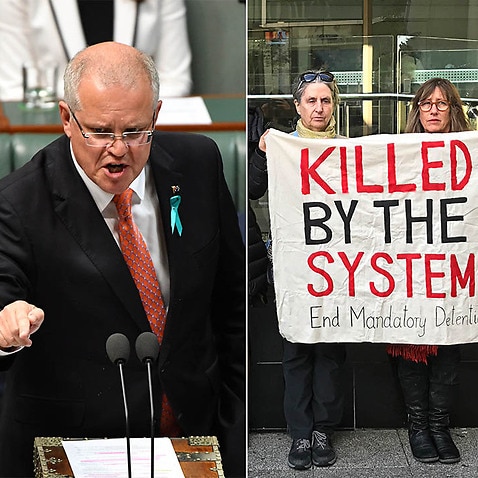 "We'll have a look at the individual cases, but that's the default position," Mr Dutton told reporters.

"There's obviously a lot of effort that's under way at the moment, to provide additional medical services on Christmas Island."

Call to reconsider support for government

Greens Senator Nick McKim said Ms Phelps and her fellow crossbenchers, who voted for the medevac legislation, should use their power to bring down the government over the issue. The crossbench celebrated when the medevac legislation passed Parliament.
AAP

The government lost its majority in the House of Representatives when Ms Phelps won Malcolm Turnbull's former electorate of Wentworth in October.

"This is Peter Dutton and Scott Morrison deliberately subverting the will of the Australian parliament," Senator McKim said.

"Surely now it's time for some of the crossbenchers to reconsider their commitment of confidence to this government."

Labor Leader Bill Shorten was less concerned about the government's interpretation of the medevac legislation.

"If the medical treatment is delivered and delivered on Christmas Island and it makes people well, that’s fine," Mr Shorten said on Tuesday.