Thousands of Australian school students are skipping school and have headed to strikes calling for more action on climate change - but a senior government minister has warned about adult activists "using and abusing" kids.

Schools students have taken to the streets in their thousands calling for more action on climate change.

But senior government minister Mathias Cormann has warned against "professional" adult activists "using and abusing kids" for their purposes.

The Australian reports that the planned student walkout School Strike 4 Climate Action is being backed by the Australian Youth Climate Coalition, a not-for-profit registered charity. Senator Cormann said reports that adults were using students for their advocacy purposes were concerning.

"They should not be used as pawns by professional adult activists as part of a cynical political strategy," he told Sky News.

"Australians will take a very cynical view of professional adult activists using and abusing kids for their purposes during school time."

"During the school time kids should be in school."

While, Barker College, a co-ed Anglican school on Sydney's North Shore, said it was supportive of students taking part.

The school's headmaster Phillip Heath told SBS News in a statement, that about 40 students planned to attend the rally.

"We are supportive of providing for student voice and support their passion about policies and decision making," the statement reads.

"It is student led change - global issues considered from a local perspective. How can I refuse to support them?"

Tara Anglican Schools For Girls, located west of Sydney, told SBS News it was pleased students wanted to speak up about "such an important issue." Thousands of school students from across Sydney attend the global #ClimateStrike rally at Town Hall.
AAP

However, in its statement Principal Susan Middlebrook said the school would prefer the rally was conducted outside of school hours.

"I am disappointed the rally is being held on a school day.  We do not want our students missing out on their important school programs," the statement reads.

Cranbrook School for Boys said the school "encourages breadth of thinking" and "acknowledges the importance of climate change"  but said "standard school policies" would apply on the day.

A spokesperson for the NSW Department of Education said "all students who are enrolled at school" would be "expected to attend that school where instruction is provided." 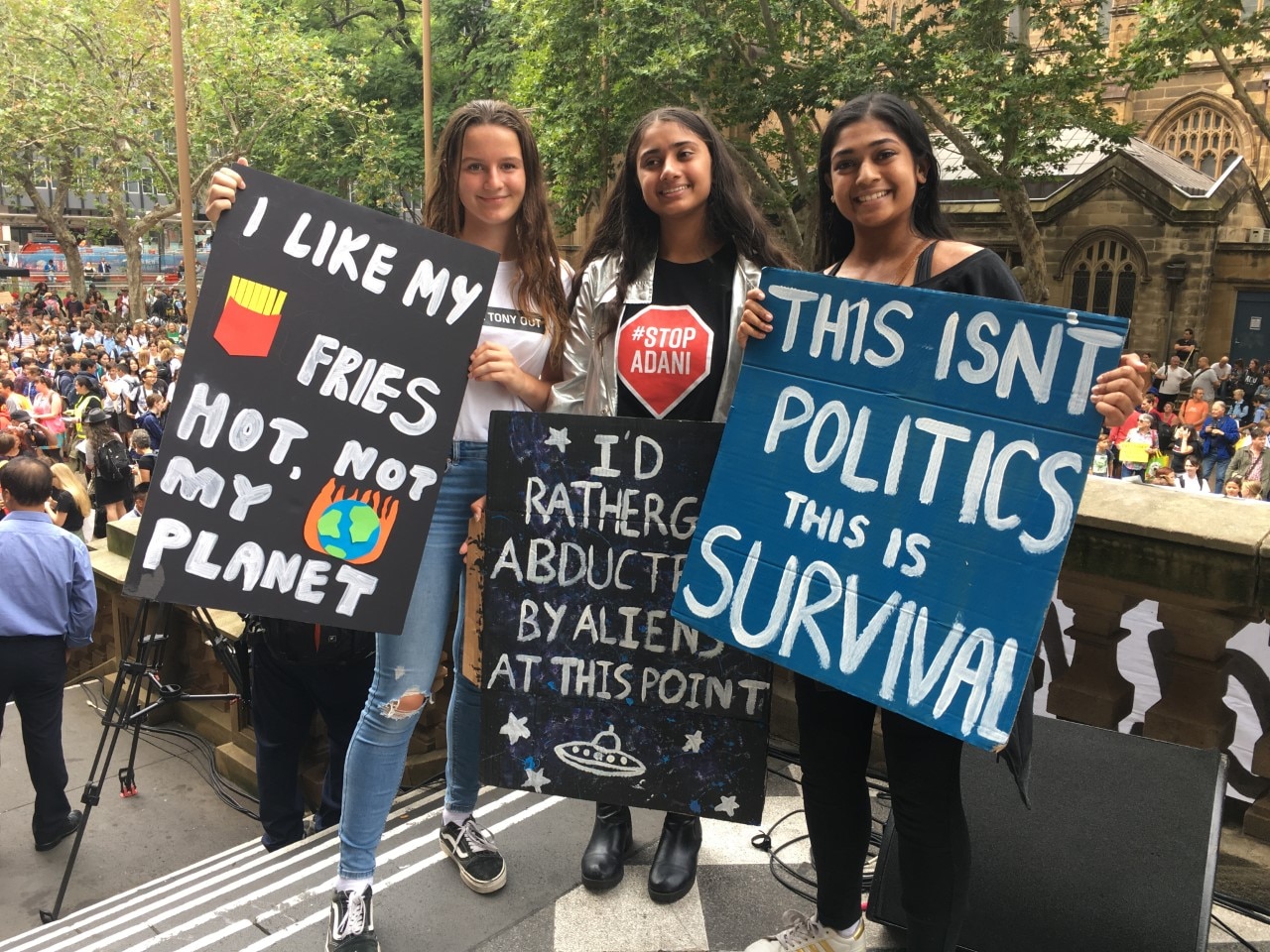 "Any student not in classes on a school day will be marked absent and unexplained absences may be subject to the school’s disciplinary code," the statement reads.

Other schools said it was up to parents to decide if students should participate.

St Catherine's School principal Julie Townsend told SBS News the decision would be "up to students and their families" to decide if the rally was a "worthwhile use of a student's time."

"If parents are happy for them to attend, they need to authorise it," he told SBS News.

The mass protests have divided opinion among political leaders with some backing the strike and others saying students should remain in school.

NSW Education Minister has warned students missing school in strikes campaigning for more action against climate change would be breaking the law.

"The law is clear and always had been, kids are required to be at school on school days," he told 2GB.

"Turn up to school. Don’t rob yourself of the opportunities to get a great quality education.” In the lead up to student climate strikes, Prime Minister Scott Morrison called for "more learning in schools" and "less activism."

On Thursday, the Prime Minister again said students should stay in school.

"I always think kids should stay in school," he told ABC Radio.

While, opposition leader Bill Shorten said students should protest outside of school hours, rather than during them.

"Kids are allowed to have an opinion," he said.

"In an ideal world, they would protest after school hours and on weekends." But NSW Opposition leader Michael Daley is supporting the thousands of Australian students striking from school.

He backed the students planning to walk out of classes this week and rally for action on climate change describing them as "future leaders".

"They are inheriting from us a world that is, at best, precarious," the opposition leader told the National Press Club in Sydney. "It really concerns me that the alternate premier to the state would think missing school is acceptable."

"The best opportunities anyone can have is to be at school and learn." Labor leader Michael Daley on Wednesday said global warming was the most pressing environmental threat of our time and young people should insist on having a voice where they currently have none.

"I support these young people and their action," Mr Daley said.

"It's a demonstration of young leadership. Events such as Friday are formative for our future leaders." “Usually strikes are when employees withdraw their labour from an employee so I’m not sure why the students are withdrawing themselves from school. It only damages their education,” he told Channel 9’s Today.

He said the government was acting to address climate change.

“It’s been happening for millennia, ever since the world was created and we are acting on it.”

Tens of thousands of school and university students are expected to miss school on Friday in the climate strikes.

School 4 Strike 4 Climate Action says it is movement of students from cities and towns across Australia.

However, in a press release it states this year students have opened the invitation to everyone including the union movement, health groups and the faith community to show solidarity with them.