US President Donald Trump and North Korean leader Kim Jong-un have signed a "historic" document committing to denuclearisation of the Korean Peninsula.

North Korean leader Kim Jong-un has committed to "complete denuclearisation of the Korean Peninsula" in a joint text.

Kim and US President Donald Trump signed the "historic" document after their Singapore meeting on Tuesday. 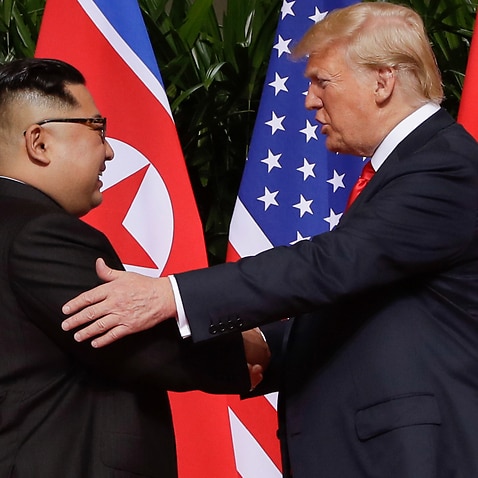 "It's pretty comprehensive," Trump said about the document, adding that denuclearisation could begin "very quickly".

The statement said "President Trump committed to provide security guarantees to the DPRK, and Chairman Kim Jong-un reaffirmed his firm and unwavering commitment to complete denuclearisation of the Korean Peninsula".

1. The United States and the DPRK commit to establish new U.S.-DPRK relations in accordance with the desire of the peoples of the two countries for peace and prosperity.

2. The United States and the DPRK will join their efforts to build a lasting and stable peace regime on the Korean Peninsula.

3. Reaffirming the April 27, 2018 Panmunjom Declaration, the DPRK commits to work towards complete denuclearisation of the Korean Peninsula.

4. The United States and the DPRK commit to recovering POW/MIA remains, including the immediate repatriation of those already identified.

The text made no mention of US demands for "complete, verifiable and irreversible denuclearisation" - jargon for scrapping weapons and committing to inspections - but did restate a vaguer commitment.

ZOOM IN ON THE TEXT: "President Trump committed to provide security guarantees to the DPRK, and Chairman Kim Jong Un reaffirmed his firm and unwavering commitment to complete denuclearization of the Korean Peninsula." pic.twitter.com/vXBeIMP81i

Speaking about Kim, Trump said "we have developed a very special bond" and is "absolutely" willing to invite Kim to the White House.

He also said Kim was "a very talented man and he loves his country very much".

Via a translator, Kim said "today, we had a historic meeting and decided to leave the past behind ... The world will see a major change."

The carefully-choreographed signing went slightly off script when it appeared Kim's team did not want him to use the provided pen. A member of Kim's team swooped in at the last minute and swapped the venue's pen with one of their own.

Earlier, Trump hailed his summit with Kim Jong-un in Singapore as a "fantastic" sit-down.

"We had a really fantastic meeting," Trump said as he strolled out of the Capella Hotel side-by-side with the North Korean leader after their working lunch on Tuesday.

"A lot of progress. Really, very positive, I think better than anybody could have expected, top of the line, really good," Trump added, before showing Kim the interior of "The Beast", his armour-plated limousine. Trump and Kim shared warm words and a historic handshake on Tuesday as they held an unprecedented summit to confront a decades-old nuclear stand-off and enmity stretching back to the Cold War.

The two men clasped hands beneath the white-washed walls of an upscale hotel in neutral Singapore, before sitting down for a half-day of meetings with major ramifications for the region and the world.

It is the first-ever meeting between sitting leaders of the two nuclear-armed foes and was unthinkable just months ago when fears of war mounted amid missile tests and verbal insults.

The pair shook hands for several seconds, Trump reaching out to touch the North Korean leader on his right shoulder.

As they sat down for their tete-a-tete, the US leader - who had said he would know "within the first minute" if a deal would be possible - predicted a "terrific relationship" with Kim.

For his part, the North's leader made a reference to the two countries' history of war and acrimony but noted the fact of their meeting showed they could overcome the past.

Sitting across from Trump at a small side table, Kim told the US president through a translator: "It was not easy to get here."

"The past worked as fetters on our limbs and the old prejudices and practices worked as obstacles on our way forward," he went on, his listener looking him in the eye and nodding. "But we overcame all of them and we are here today."