The case against a Northern Territory police officer charged with murder over the November shooting of Kumanjayi Walker has been adjourned for 10 weeks, due in part to the impact COVID-19 has had on the collection of medical evidence.

The family of Warlpiri man Kumanjayi Walker felt the weight of coronavirus restrictions on Thursday, as their campaign for justice faced more hurdles.

It comes as Alice Springs Local Court adjourned a hearing in the murder case against Constable Zachary Rolfe, who was charged over the shooting of Mr Walker in the central desert town of Yuendumu last November.

Speaking with NITV News from Adelaide Mr Walker’s cousin Samara Fernandez said the outcome was expected, with growing pressures on the health system as a result of coronavirus creating significant delays.

“We were expecting it because there’s just too much evidence that still needs to be compiled and processed and put together,” she said.

“But obviously we’ve got the COVID-19 pandemic happening at the moment and that’s just putting a hold on everything.”

The impact of COVID-19 on court proceedings meant only four people were able to view the matter in Alice Springs Local Court, while the community in Yuendumu were given the option to hear proceedings via an audio link at the local courthouse.

But it’s the impact coronavirus and the new restrictions are having on community morale that Ms Fernandez said has been most difficult.

With Northern Territory remote communities closing borders in an attempt to stop the spread of the virus, Ms Fernandez has been isolated in Adelaide where she lives for university.

“I feel a bit of a heavy heart being away from family and stuff at this time… because you know you’re trying to cope with getting everything together, working from home, studying at home as well on top of that - and then you can’t be with family, which you wanna be,” she said.

Ms Fernandez said the Warlpiri Parumpurru [Justice] Committee, which campaigns for justice in the case, has been unable to hold regular face-to-face meetings or organise gatherings outside of the courthouse like they have in previous mentions.

“It’s good in terms of everybody’s safety right now, but at the same time it sort of sucks for that connection within family,” she said.

“You know the solidarity exists but you can’t showcase it on the level that you would prior, because you can’t have obviously everyone together in the same room,” she said.

Ms Fernandez said she hoped their campaign would pick up momentum by the adjourned date on 25 June. 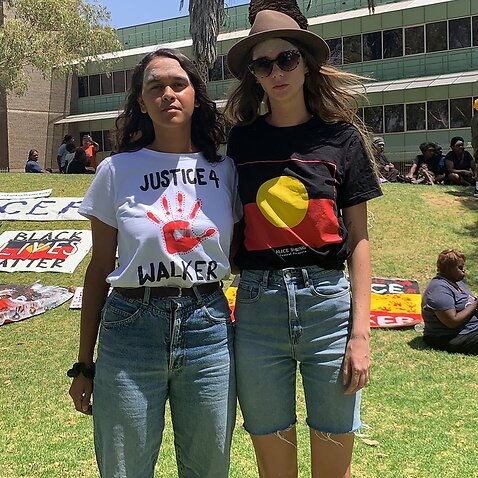 Meanwhile, community members have praised the suspension of an NT Police Officer without pay overnight, who created and sold a racist singlet to colleagues referencing the shooting of Mr Walker.

Senior Warlpiri man Ned Jampijinpa Hargraves said while his suspension was welcome, he wants to see the officer taken off the force for good.

“But we want to see him sacked. For us yapa [Warlpiri], we don’t want him back on the force.”