SBS News spoke to Behrouz Boochani in Papua New Guinea about the fate of Kurds back in the Middle East.

Kurdish refugee Behrouz Boochani has warned of a "genocide" against his fellow Kurds in northern Syria, as Turkish forces continue a large-scale assault.

After the US abruptly departed the region last week, Turkey launched a massive bombardment on Kurdish-controlled areas across the border.

Mr Boochani, who was detained by Australia on Manus Island for six years before recently being moved to Port Moresby, told SBS News he was extremely worried by the latest developments. 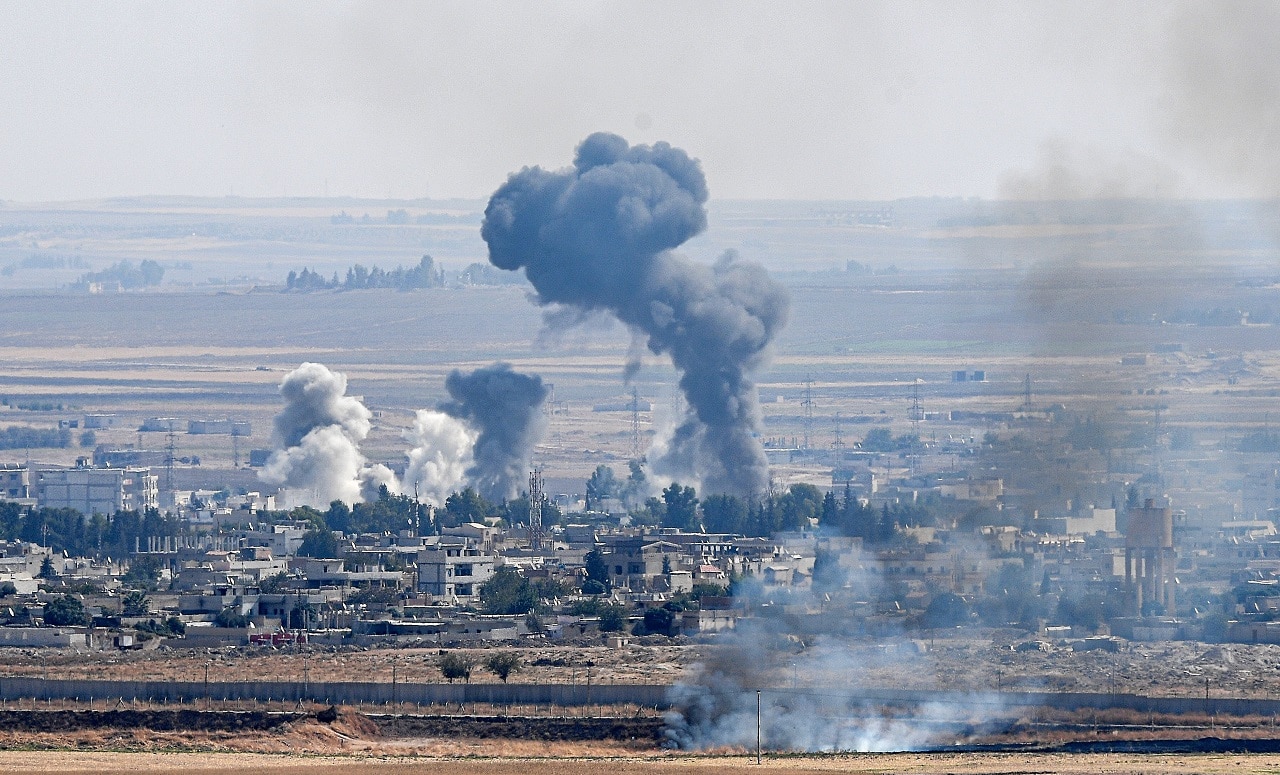 Smoke rises from the Syrian town of Ras al-Ain on Monday.
AAP

"[This is] another dark chapter of superpowers always using Kurds for their political benefit ... We are facing another genocide," he said.

The US has been condemned internationally for leaving the Kurds, after the minority group fought alongside Americans to rid the region of IS.

"More than 11,000 [Kurdish] fighters died in this war against ISIS, to make the world a better place," Mr Boochani said, using another acronym for the terror group. Some 30-40 million Kurds live in a large area that straddles Turkey, Iraq, Syria, Iran and Armenia, with many long hoping for their own state.

During the recent Syria civil war, Syrian Kurds managed to carve out a sizeable area of self-rule across the north and east of the country, now known as Rojava. He said Australia had a "duty" to stand up for the Kurdish minority in Syria.

"Australia, like other countries, if you claim you are a liberal democracy, if you claim that you are really fighting against ISIS, you should support Kurdish people," he said.

Kurdish people fought against ISIS for everyone

"This war is an international shame. Because the Kurdish people fought against ISIS for everyone, for all the people around the world, particularly for people in Western countries.

"Now it is the time that Australia, like other countries, supports Kurdish people and show some respect." Kurds take part in a demonstration in Erbil, Iraq, this week.
Getty

The Australian government said it is "deeply troubled" by the Turkish operation and in a statement, Prime Minister Scott Morrison said the federal government has flagged its concerns.

"We have expressed this view directly to the Turkish Government." According to the Syrian Observatory for Human Rights, a Britain-based war monitor, the Turkish attack has already left 133 pro-Kurdish fighters and 69 civilians dead.

The United Nations believes about 160,000 people have been displaced.

Turkish President Tayyip Erdogan has vowed to crush the Kurdish-led Syrian Democratic Forces, which he links to separatist militants inside Turkey.

He wants to create a roughly 30-kilometre buffer zone along its border to keep Kurdish forces at bay and also to send back some of the 3.6 million Syrian refugees on its soil. Mr Boochani, a Kurdish journalist, fled persecution from neighbouring Iran and attempted to come to Australia via boat from Indonesia in 2013.

However, his boat was intercepted and under the Australian government's Operation Sovereign Borders he was detained on Manus Island.

Mr Boochani remained on Manus Island until this year when the remaining asylum seekers there were transferred to PNG capital Port Moresby.

He has become a leading refugee advocate and his memoir No Friend But the Mountains: Writing from Manus Prison won Australia's richest writing prize, the Victorian Premier's Literary Award.