Labor will return to power in Queensland, likely retaining its majority.

Annastacia Palaszczuk has claimed victory for Labor in the Queensland state election, becoming the first woman in the nation's political history to win three elections.

As vote counting continued on Saturday night, Ms Palaszczuk told supporters in her electorate she was confident of governing in majority.

"For many Queenslanders, I know it has been an incredibly tough year," she said.

"It has been tough not being able to see your family and friends in other states, or even around the world, as we've been in the midst of a global pandemic.

"But here in Queensland we've all stood strong and united, and together we are on top of the pandemic, and if we continue to work together, we will stay strong.

"I give my commitment to the people of this state that my team will roll up our sleeves and we will get back to work as quickly as possible for you.

"And I’m confident we will do it with a majority Labor government!"

On Saturday night, Labor was on track to hold as many as 49 seats - up one on its previous numbers.

“Queensland is the best place on earth”: @AnnastaciaMP was greeted with cheers in her electorate of Inala after she arrived to claim victory in Queensland. #QLDvotes @SBSNews pic.twitter.com/QCHpuw0UTx

"Now Queenslanders have made their decision, and I thank each and every one of them for voting and upholding our democracy."

The LNP looked likely to retain at least 32 seats in the 93-seat parliament.

In the last parliament, the opposition had 38 seats.

A big factor going against the LNP is the collapse of the One Nation vote - down more than six per cent - and the holding up of the Greens vote.

The Greens appear on track to gain one seat - South Brisbane held by former deputy premier Jackie Trad - taking its numbers to two in the new parliament.

"But let's be clear, it is only challenging because the Liberals had chosen to preference against her," he told the ABC.

"If they had preferenced the Greens last, then Jackie wouldn't be in trouble."

"We have run on a really bold platform on vested interests...We have been speaking honestly about a real Green wave through this election," he told Channel Seven.

Going into the election, of the 93 parliamentary seats, Labor held 48 to the LNP's 38, with the crossbench comprising three Katter's Australian Party members, one Greens, one One Nation, one North Queensland First and independent Sandy Bolton.

One Nation appeared likely to hold its seat with KAP also holding three and Ms Bolton returned in Noosa.

While the LNP was holding most of its traditional ground, the seats of Currumbin, Bundaberg, Chatsworth, Pumicestone and Caloundra were at risk of falling to Labor.

Labor will go into the 2020 election holding 48 of 93 seats, but a loss of two seats would see the Palaszczuk government losing its majority. Meanwhile the LNP needs nine to win a majority. #QLDvotes2020 #qldelection @SBSNews pic.twitter.com/5D4yBCCPQo

The swing was mixed across the state, with the southeast corner going two per cent towards Labor and 1.3 per cent to the LNP in regional parts.

"The mood in regional Queensland is palpable. They are waiting with baseball bats," he said.

Some 1.65 million voters - or half of the electorate - already cast their ballots in the state election touted as Australia's most significant since the COVID-19 outbreak.

Gold Coast-based federal LNP minister Karen Andrews said the result was "clearly not heading in the direction we would want it to go".

Ms Andrews put the swing to Labor down to older voters who "probably feel safe with the borders closed" endorsing Ms Palaszczuk's strategy in dealing with the coronavirus.

"What we have been saying is that this is a crisis on two levels, health and economy, but clearly in some cases health was the most significant for people," she told the ABC.

Labor national president Wayne Swan said Ms Palaszczuk had earned an "enduring respect" for her approach to the pandemic.

"What interests me is the strength so far on the Sunshine Coast and the Gold Coast," he said. 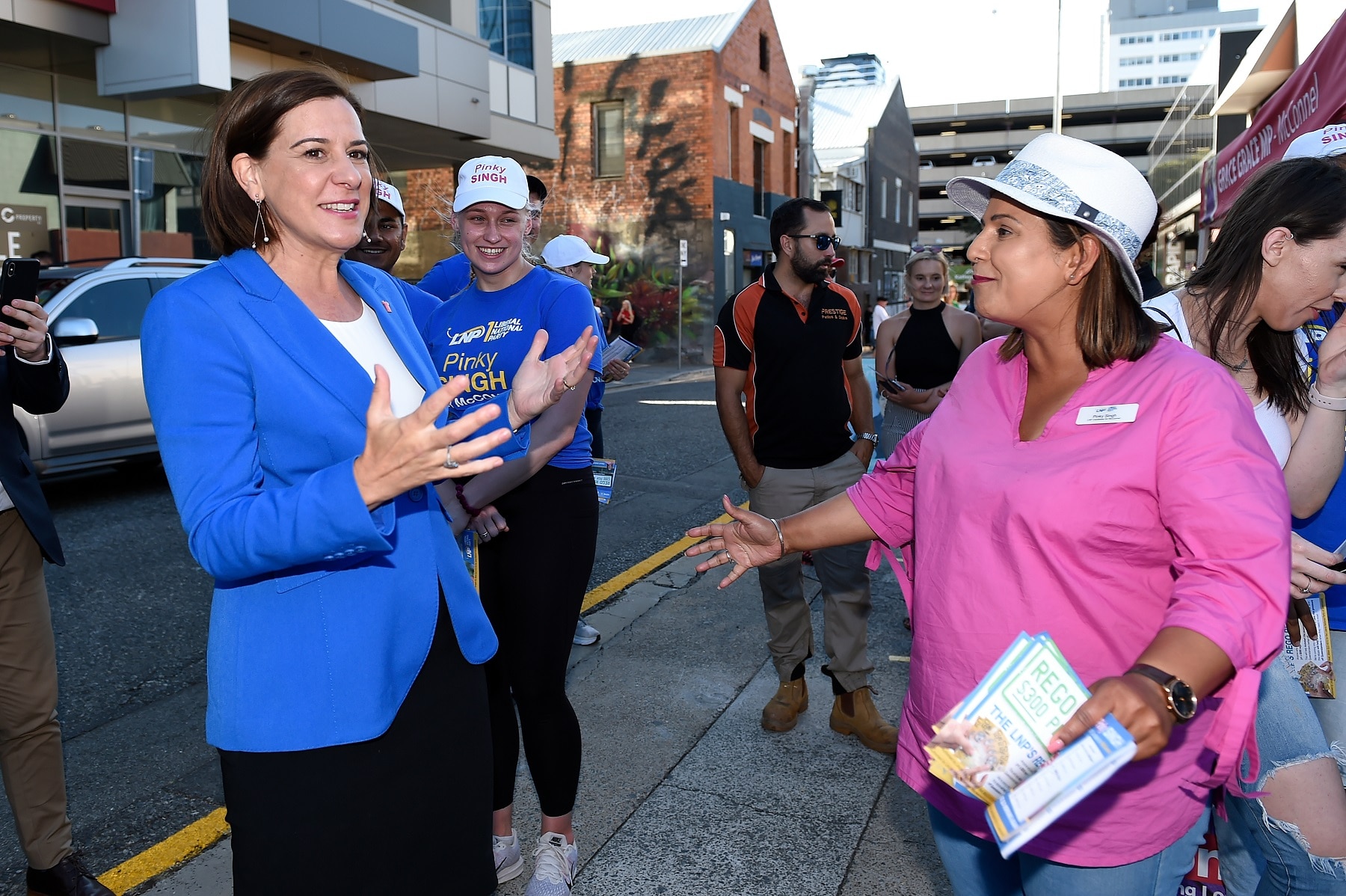 Election day was not without its hurdles, with Ms Palaszczuk heckled by a LNP volunteer and challenged by her rival candidate to reopen Queensland's borders while voting in Brisbane.

Ms Palaszczuk was speaking to reporters after casting her ballot in her southern Brisbane electorate of Inala, which she holds by 26.1 per cent, on Saturday morning.

"I've been overwhelmed everyone's been coming up saying thank you for keeping us safe and that's been my number one priority to look after Queenslanders," she told them, referring to her COVID-19 response.

"Today's a really important day and it's about Queenslanders making a choice. It's about who they want to be the premier to actually lead the state, so that's the important choice they have to make." 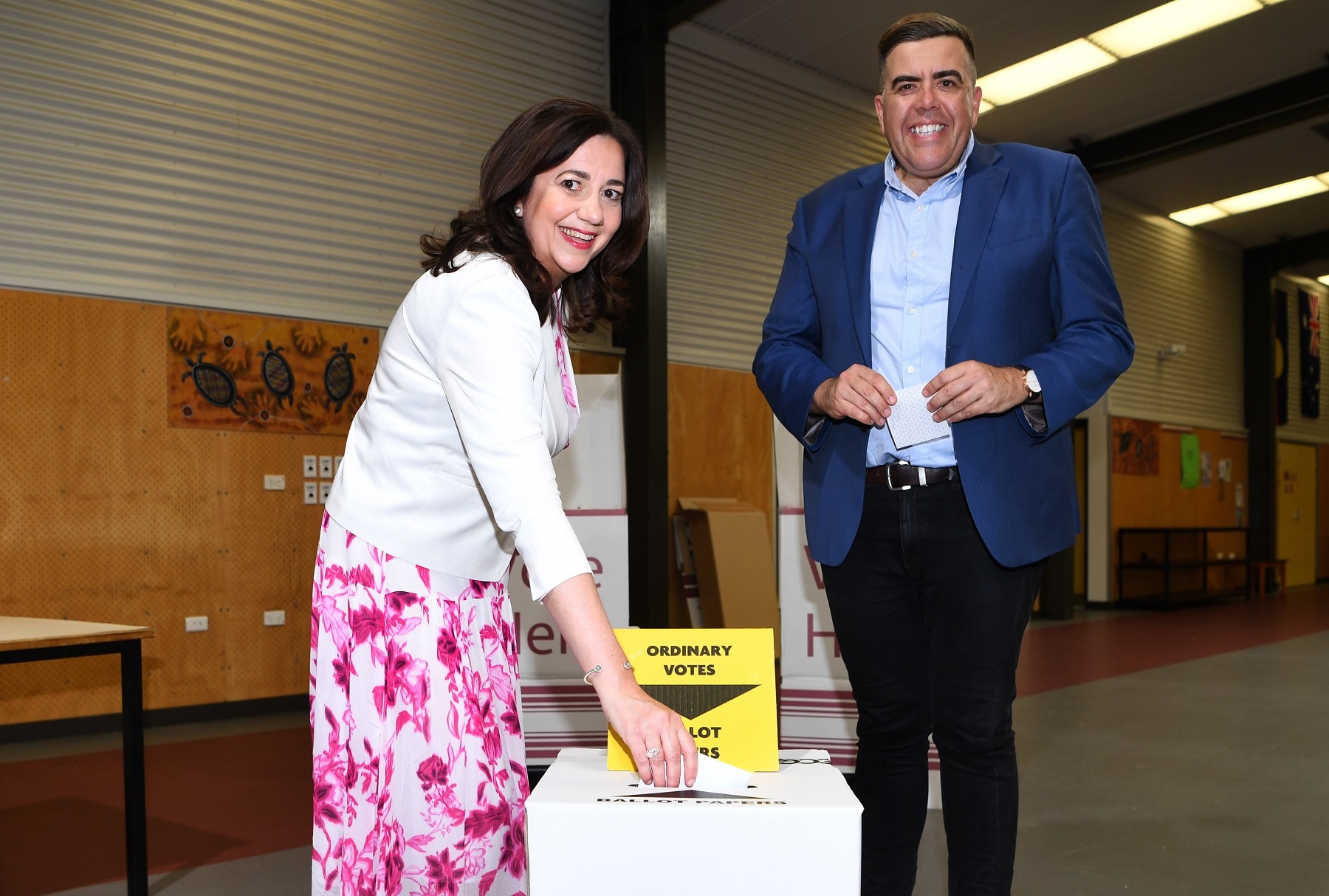 Queensland Premier Annastacia Palaszczuk, joined by the Member for Oxley Milton Dick, casts her vote in the state election.
AAP

Then, as the TV cameras continued to roll, an LNP volunteer started shouting that she should open the borders.

"Consider the travel industry, 209,000 people out of work premier. Consider the people that I employ, it's about time to open the borders," the man named John yelled.

Ms Frecklington voted in Townsville before heading to the state capital.

Libby, who’s been serving up #democracysausage to voters today, says she found numbers were scarce at her sizzle station. She attributed the decline to pre-polling. 75% of Queenslanders cast their votes early this year. #qldpol #QueenslandVotes @SBSNews pic.twitter.com/nbVzMFVYWx

The pandemic has been good for incumbents, with leaders across Australia enjoying high approvals ratings and Labor governments recently re-elected in the Northern Territory and Australian Capital Territory.

Queensland recorded no new COVID-19 cases on Saturday and notched 50 days since its last locally-acquired infection.