Wild weather is pounding Queensland and northern NSW, damaging the coast, with authorities warning that dramatic conditions will continue to deteriorate.

Extreme weather lashing the northern NSW coast and southeast Queensland will continue to intensify with the dangerous rainfall and strong winds to continue unabated overnight.

Sites in NSW's Northern Rivers District had about 400mm of rain in just a few days, the Bureau of Meteorology's Jane Golding told reporters on Monday.

Some locations near the Queensland-NSW border were inundated with 180mm of rain on Sunday.

And there was no relief as conditions deteriorated throughout Monday.

Wind gusts have been as high as 104km/h at Cape Byron and are increasing with the weather bureau warning of winds strong enough to bring down trees and power lines.

Other beaches along the NSW northern coast are being eroded after huge tides, gale force winds and heavy rain washed away much of the Main Beach at the popular tourist town of Byron Bay.

This is what #coastalerosion looks like. Standing at the edge of Clarke's Beach, #ByronBay: beach almost gone, trees fallen as the ground that holds them is washed away. Now what we expected on our summer holiday. pic.twitter.com/bKYrFsKnxg

Powerful waves are expected to continue to batter the NSW mid-north coast, almost as far south as Newcastle.

The rains will likely ease later on Tuesday.

The NSW State Emergency Service has received more than 900 requests for help, with 160 logged between 6pm on Monday and 1pm on Tuesday.

Four people have been rescued, including a woman who was swept away when she tried to leave her car after getting caught in floodwaters.

The rain has produced significant overland flash flooding with more flooding likely to continue even after the worst of the rain subsides. 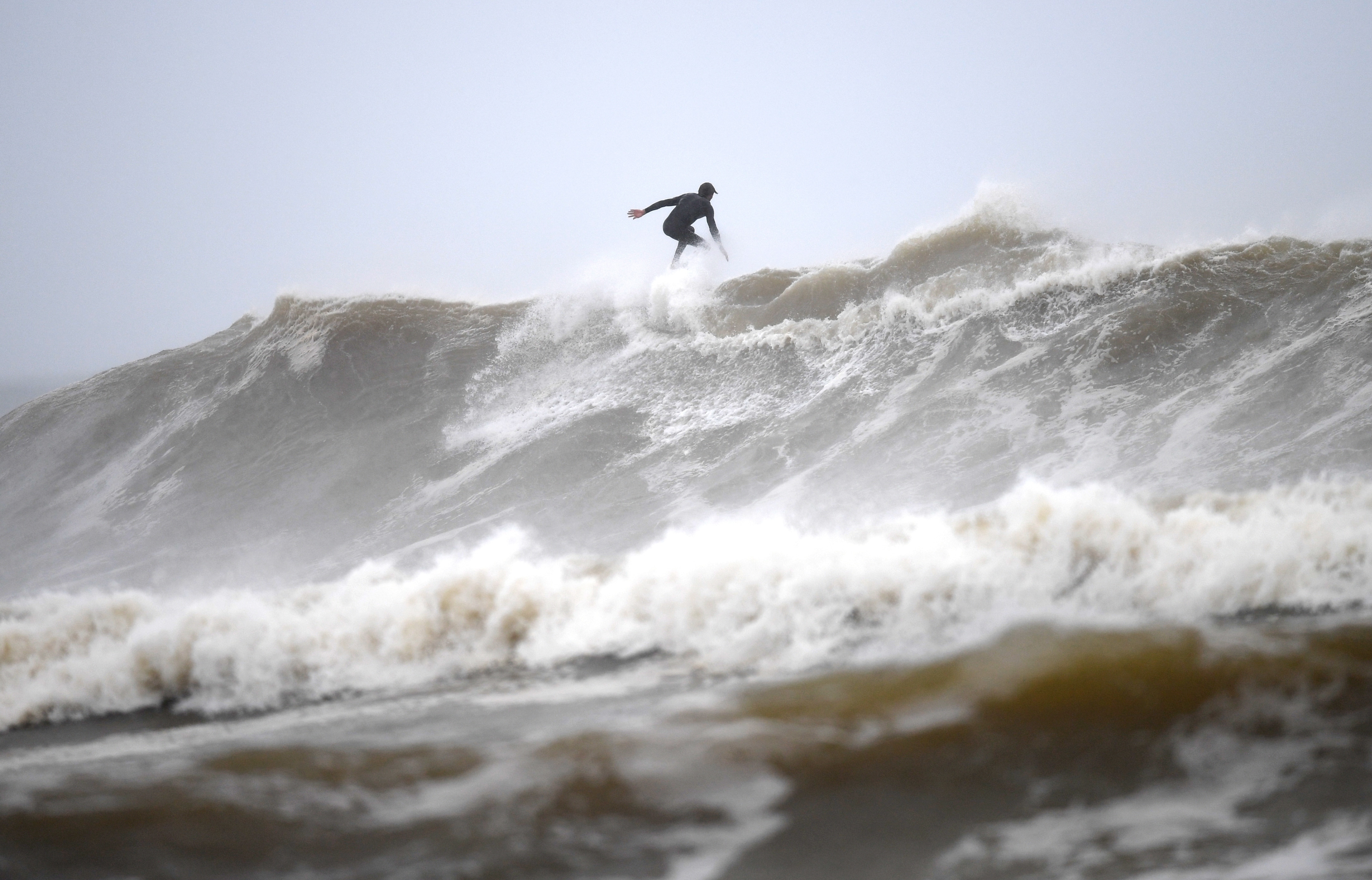 A surfer hits the beach amid wild conditions at Snapper Rocks on the Gold Coast, Sunday, 13 December.

The coastal erosion is also making it difficult for surf life saving craft to launch into the water.

A flood watch and a severe weather warning remain for the northern rivers and mid-north coast.

In Queensland, Sunshine and Gold Coast beaches are closed and there is a severe weather warning for heavy rain, damaging winds, abnormally high tides and hazardous surf in Queensland's southeast.

Gold Coast Mayor Tom Tate said that while the city was holding up well, the risk remained.

Heavy rain is expected to hit the Gold Coast hinterland catchment areas and Mr Tate urged drivers not to try to drive on flooded roads.

BOM senior meteorologist Laura Boekel said severe thunderstorm activity was likely to increase from late afternoon in the southeast, with further heavy rain the main risk as it develops.

The weather is being generated by a coastal trough off the southeast coast and a slow-moving upper low over the southeast.

"The focus of heavy falls will be highly dependent on the location of the trough and upper trough, but is likely to be south of Fraser Island contracting to the Gold Coast by this afternoon and easing further from Tuesday," she said. 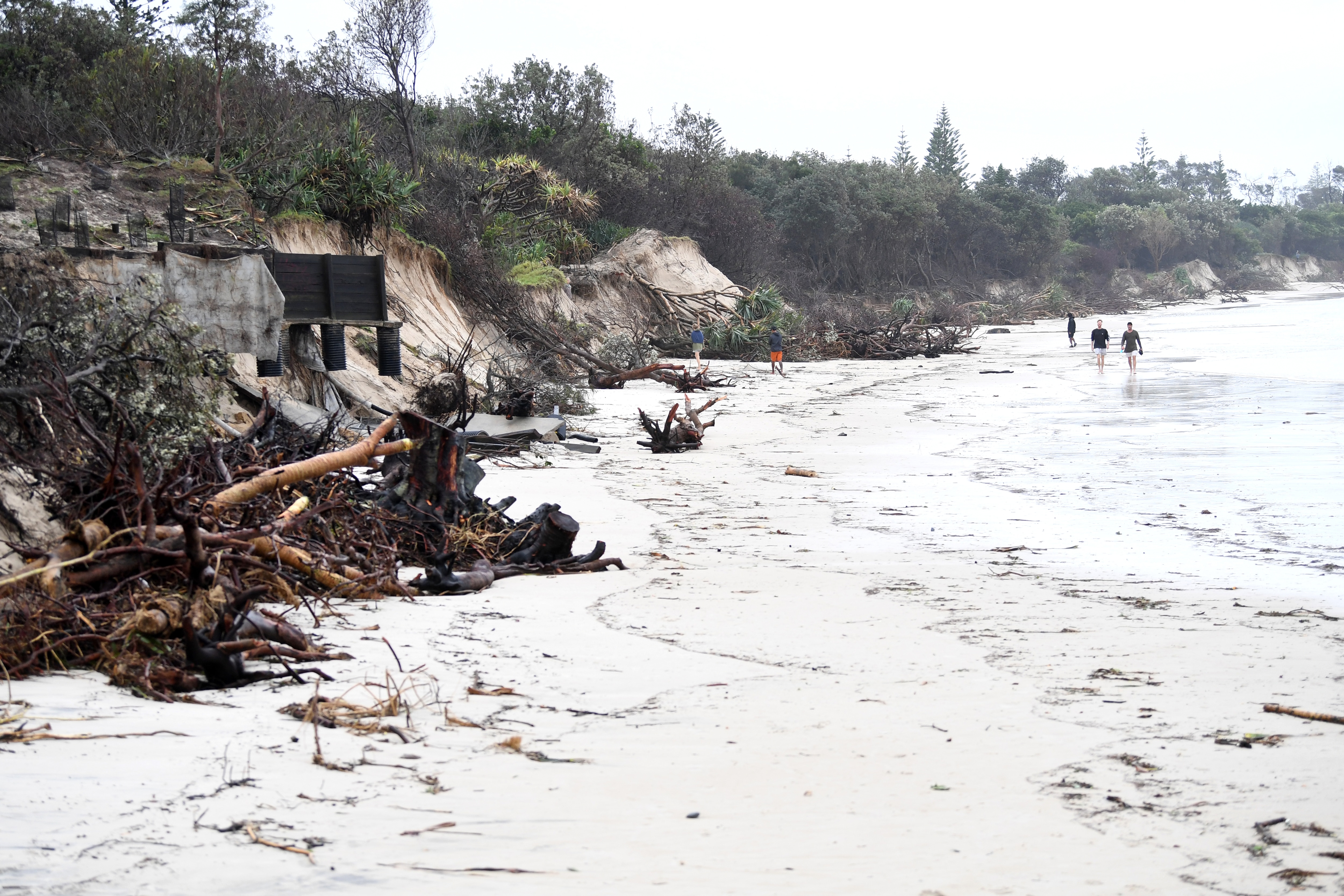 A flood watch is current from Hervey Bay to the NSW border and there is a minor flood warning for the Logan and Albert Rivers.

Flooding is also possible along coastal locations and about low-lying areas near Brisbane River.

The BOM is warning about more showers and storms next week, with those conditions continuing right until Christmas.

The low-pressure system off the southeast Queensland coast is expected to bring another round of very heavy rainfall and strong and damaging winds, with gusts of more than 100 km/h in some areas forecast.

Authorities have asked residents to be prepared for dangerous conditions, warning them to protect their homes and animals, stay on top of the latest warnings, and avoid driving through flood water and swimming at beaches.