Lebanon has unveiled a new cabinet line-up, but the government is being scorned by protesters and now faces the challenge of saving a collapsing economy.

More than a month after he was designated with backing from the powerful Shiite movement Hezbollah, and nearly three months after his predecessor Saad Hariri resigned under pressure from the street, Prime Minister Hassan Diab on Tuesday announced his cabinet of 20 ministers. Anti-government protesters throw firecrackers at riot police during a protest against the new government.
AAP

The academic and former education minister, who was little-known in Lebanon until last month, insisted in his first comments as premier that his cabinet was a technocratic one that would strive to meet protesters' demands.

"This is a government that represents the aspirations of the demonstrators who have been mobilised nationwide for more than three months," he said.

He said his government "will strive to meet their demands for an independent judiciary, for the recovery of embezzled funds, for the fight against illegal gains".

Groups of demonstrators had gathered in the streets of Beirut before the cabinet was even unveiled, blocking off a main street in the centre of the capital where violent scuffles with the police left dozens wounded over the weekend.

Riot police have declared war on us in downtown Beirut. The most aggressive use of tear gas I've witnessed. There is a clear political decision to end the uprising. They will fail to stop us. #Lebanon #لبنان__ينتفض#لبنان_يثور pic.twitter.com/hV6Go19IGF

Close to the parliament building, protesters attempted to rip down barbed wire and throw stones at police, who responded with tear gas and water cannon, an AFP journalist witnessed.

The government, which is scheduled to meet on Wednesday for the first time, includes the country's first-ever female defence minister, Zeina Akar, and five other women.

The post of foreign minister, which had been held by President Michel Aoun's controversial son-in-law Gebran Bassil, was handed to respected diplomat Nassif Hitti.

The new cabinet is made up of unfamiliar figures, many of them academics and former advisers, but protesters were quick to argue that the absence of the biggest names in Lebanon's widely reviled hereditary political elite was but a smokescreen.

"We want a new Lebanon, a Lebanon with no corruption," Charbel Kahi, a 37-year-old farmer, told AFP as fellow protesters beat drums behind him.

"They are not taking the Lebanese people seriously with this government," he said.

Mr Diab admitted that "Lebanon is experiencing a difficult time in its history" and called for stability but within minutes of his address protesters were out in the streets of several cities, including Tripoli, Sidon and Byblos. Hilal Khashan, a professor at the American University of Beirut, argued that the idea of a genuinely technocratic government in Lebanon was "wishful thinking".

"Behind every candidate, there is a political party backing their nomination," he said.

"Hassan Diab did not keep his promise of forming a government of independent" experts, she said. 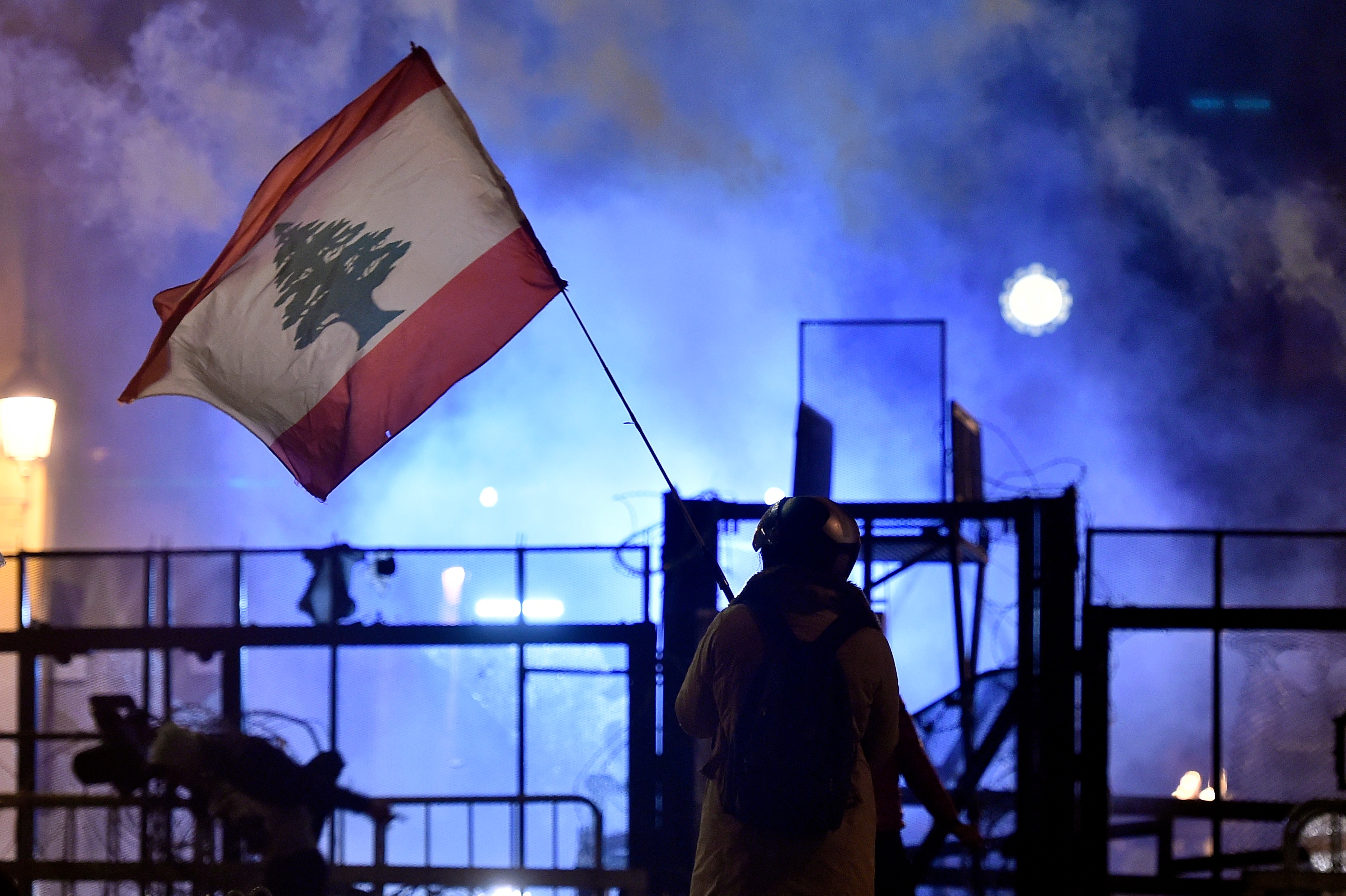 An anti-government protester waves a Lebanese flag during protests and clashes with police outside the Lebanese Parliament building.
AAP

Diab, a 61-year-old engineering professor at the American University of Beirut and self-professed technocrat, had come under pressure on both the political and economic fronts.

Every day that passed without a cabinet had fuelled the anger of protesters and tested the patience of foreign donors warning that the quasi-bankrupt state could ill afford further delays.

Donors and citizens are pinning their hopes on a new government to spearhead reforms, unlock billions in international aid and help stabilise a plummeting currency.

"The task that awaits any cabinet during this serious period is Herculean," said Karim Mufti, a political scientist.

"In view of the multidimensional nature of the crisis, it seems difficult to envisage short-term solutions to the country's financial, economic and social problems." A grinding dollar liquidity crisis and informal caps on withdrawals of the greenback have compounded the crisis, leaving Lebanon on the brink of default.

The outgoing government included all of Lebanon's political factions, but Hariri's Sunni-dominated movement and some of his allies have opted to stay out of the new cabinet.

This leaves the small country of six million led by a government dominated by the sanctions-hit Hezbollah movement and its allies. Anti-government protesters throw stones at riot police during a protest against the new government.
AAP

Both the Christian bloc of President Michel Aoun and the Shiite Amal party of Parliament Speaker Nabih Berri are political allies of the Iran-backed organisation.

Observers have warned that such a lopsided government could struggle to foster enough goodwill at home and abroad to implement much-needed reforms.