The Liberal senator was responding to audience questions from community members of the fire-affected NSW city of Queanbeyan.

New South Wales Liberal senator Jim Molan has been heckled by members of the ABC's Q&A audience when questioned about the basis for his doubts about human-induced climate change.

Asked whether he believed the scientific consensus of climate change, Senator Molan said he is keeping an "open mind" but does have doubts.

"I respect very much respect scientific opinion but every day across my desk comes enough information for me to say that there are other opinions,"  Senator Molan said.

Asked to clarify exactly what information he is relying upon, he admitted: "I'm not relying on evidence".

He said his view did not change the need for the government to respond and adapt.

"This is why my mind is open. I would love to be convinced one way or the other. 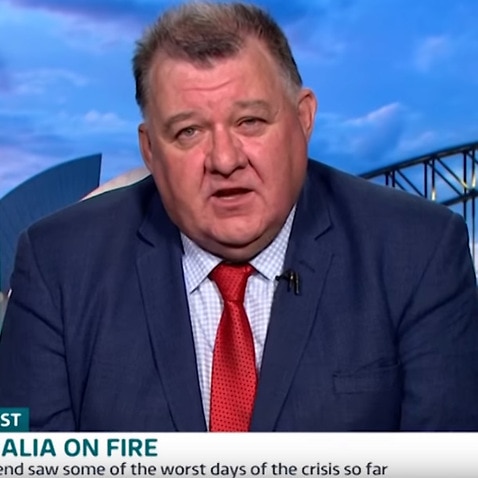 "But to be prudent what the government is doing is it's got a climate, an emissions reduction policy. And it is a good policy. And it will mitigate risk to the maximum that it can and where risk cannot be mitigated, it will adapt. And that's what we've got to work on."

"Every scientific institution in the world that's weighed in on this matter, climate change is real," he said moments before Senator Molan said he was not entirely persuaded that the "science is settled" on the matter.

"It's human-caused. It's already leading to disastrous impacts here in Australia and around the rest of the world. And it will get much worse if we don't act," Professor Mann said.

Senator Molan's response was slammed by social media users, who were quick to attack the government's climate change policy.

There are over 16000 peer-reviewed papers stretching back 4 decades that support anthropogenic climate science. It is more certain than smoking causing cancer! Jim Molan is a disgrace. #qanda

The audience is made up of fire-affected communities. Jim Molan is speaking right now pic.twitter.com/q3o8IdgSWD

Looks like Jim Molan and Scott Morrison are on the same page. Clueless about what to do on climate change and bushfires management. #qanda

Would it be possible to do a FOI request for what goes over Jim's desk? Jim Molan "enough evidence comes across my desk to dispute human caused climate change" #qanda

#qanda Please do not have Jim Molan as a panellist again. He is embarrassing, especially in front of international guests. And Australia used up all it’s cringe tonight.

Others used the interaction to warn Labor to think about its climate change policies.

@AlboMP I hope you saw the audience on #qanda when Jim Molan spruiked his fatuous climate open-mindedness. They guffawed in ridicule. Not city latte lefties, but regional Australians mocking his denialism. The tide has turned. Make sure Labor's boat is facing the right direction.

Jim Molan tells us on #QandA that, as an LNP politician, he is constantly barraged with denialist nonsense that comes across his desk every day and is, as a consequence, confused. Why doesn't he take some time out to talk to real climate scientists? There are plenty at ANU.

This bushfire season has burnt nearly 12 million hectares of land across the country. Thirty-three people have died and more than 2,700 homes lost. An estimated 1 billion animals have been killed.