Australia will have a new prime minister within hours, with Peter Dutton, Julie Bishop and Scott Morrison competing for the support of their Liberal colleagues in an ongoing party room meeting.

SBS News understands Malcolm Turnbull lost a leadership spill 45 votes to 40, triggering a leadership ballot. The prime minister is expected to now resign from parliament and trigger a by-election in his Sydney seat of Wentworth.

Foreign minister Julie Bishop has been knocked out in the first three-way vote, sources told SBS News, clearing the way for a one-on-one contest between Peter Dutton and Scott Morrison.

I have just been provided with a request for a meeting of the Parliamentary Liberal Party. It has 43 signatures. As soon as they are verified by the Whips, which should not take long, the meeting will be called.

Breaking: Liberal Party President Nick Greiner has messaged PM saying there is a unanimous decision of state presidents that the matter needs to be resolved today #libspill #auspol

Former Home Affairs minister Peter Dutton was the first to declare his candidacy, demanding a second ballot after losing to Mr Turnbull by seven votes on Tuesday.

The third choice is treasurer Scott Morrison, seen by some in the Coalition as a compromise between Ms Bishop's moderate views and Mr Dutton's conservatism.

Mr Turnbull has pledged to quit the parliament altogether if the spill motion succeeds today, potentially triggering a by-election in his Sydney seat and threatening the government's slim one-seat majority in the House of Representatives. But there were some caveats. The solicitor-general said it was "impossible to state the position with certainty" without more detailed facts about Mr Dutton's financial stake in two childcare centres.

Julie Bishop's partner David Panton tonight, who is attending the Myer runway series in Sydney, when asked who will win #libspill
"You're heard it straight from the horse's mouth - by tomorrow at lunch time Julie Bishop will definately be Prime Minister," he told @AnnaHeraldSun In an extraordinary press conference on Thursday, the prime minister criticised rebel MPs within his party for staging an “internal insurgency”.

Government in chaos as ministers resign

The crisis was amplified when key ministers Mathias Cormann, Michaelia Cash and Mitch Fifield deserted Mr Turnbull in a move that all but spelled the end of his prime ministership.

It came on Thursday as the Turnbull government successfully adjourned Parliament, cancelling Question Time in an extremely rare step that led to Labor accusations that the Coalition had lost the ability to govern.

Senator Cormann said it was with "great sadness and a heavy heart" that the three ministers advised the prime minister that he no longer had the support of the majority of the party room and offered to resign. The three ministers repeated their concerns on Thursday morning after learning that five Cabinet ministers, who supported Mr Turnbull in Tuesday's ballot, had switched their allegiance.

"We advised the prime minister of our judgement, that he no longer enjoyed majority support in the party room, and that we believe we needed to - that he needed to facilitate an orderly transition, and that we should a party room meeting," Senator Cormann told reporters.

The influential finance minister said he now believed Mr Dutton was the best person to lead the party to the next election.

The three former allies of the Prime Minister join a growing list of ministers that have offered their resignation from the frontbench.

Mr Turnbull had tried to persuade ministers to continue in their roles even if they had backed his rival in Tuesday's ballot, but several are now determined to quit.

Health Minister Greg Hunt, who is likely to run as Peter Dutton's deputy in a second leadership ballot, is among the latest to go.

This morning I spoke with the Prime Minister and tendered my resignation pic.twitter.com/mELOY3SASj

Trade Minister Steve Ciobo, Human Services Minister Michael Keenan and Citizenship Minister Alan Tudge have all been to see the prime minister to tell him they cannot to serve under him.

I have tendered my resignation as Minister, having offered it on Monday. This is a decision I have not taken lightly. However, this morning it became clear that there is no longer the support for PM, including from members of leadership group. It has been a great honour to serve.

Assistant Minister James McGrath, a former Turnbull loyalist, quit for the second time on Wednesday and insisted the Prime Minister accept his resignation.

"Like Peter Dutton has said, we must do everything in our power to stop Bill Shorten ever becoming Prime Minister," Senator McGrath posted on Facebook.

Michael Sukkar and Zed Seselja have also insisted the Prime Minister accept their resignations after declaring their support for his challenger Peter Dutton.

Meanwhile, a Nationals MP has pledged to quit the government and sit on the crossbench if there is another leadership spill, in a move that could threaten the Coalition's one-seat majority in the House of Representatives.

"The constant rotation of prime ministers by both the Labor Party and the Liberal party, I cannot condone," the Kevin Hogan, the MP for Page said.

He is one of several MPs to express frustration at the latest leadership crisis to dominate Canberra. Since losing Tuesday's leadership ballot by 13 votes, Mr Dutton has been working the phones and embarking on a charm offensive in the media, trying to secure the extra seven votes he needs to roll Mr Turnbull.

Dutton was an MP for 7 years and was 38 when he boycotted the apology to first Australians. A grown man, experienced politician who knew what he was doing - sending a dog-whistle to racist sentiment. A question of character.For this reason alone, he should never be Prime Minister

He went on Melbourne radio in a bid to let voters know who he is, revealing his idea for a royal commission into electricity and fuel prices. But his plan to exclude household electricity bills from the GST copped a belting.

He said it would deprive the states and territories of $7.5 billion over four years.

“I think we do have to cut the numbers (of migration) back, I haven’t got a number to give to you today ,” Mr Dutton said.

“I think immigration is incredibly important to our country I think it needs to be operating in our country’s best interests”. 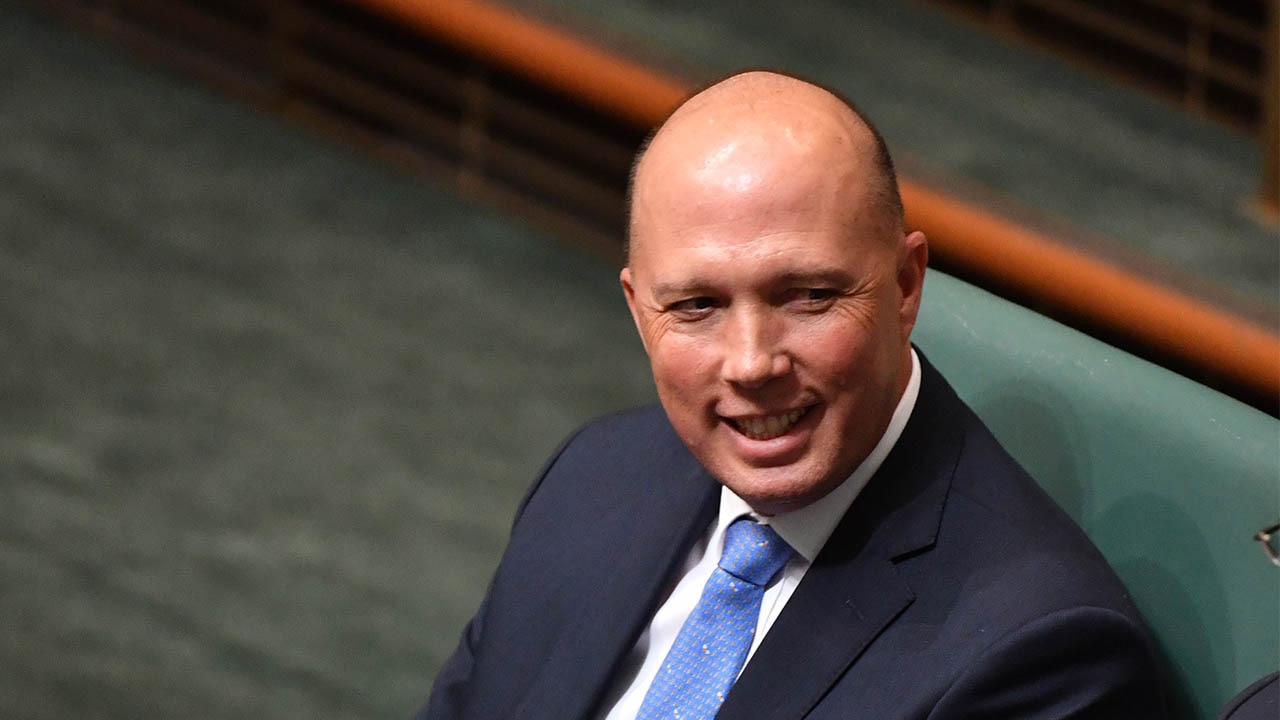 What comes next in the battle for the prime ministership?

* A leadership spill will be held during today's party room meeting at noon today if the prime minister receives a letter with 43 Liberal MP signatures asking him to do so.

* Before that Mr Turnbull expects to receive legal advice at 8.30am over leadership rival Peter Dutton's eligibility to sit in parliament.

* If it fails to clear Mr Dutton over a possible breach of section 44 of the constitution, the meeting will not go ahead and it is likely he would be referred to the High Court by the parliament when it next sits.

* In that case, Turnbull would remain leader and prime minister.

* If Dutton is not found to potentially be in breach of the constitution, it would clear the way for the Liberal partyroom meeting.

* Under party rules, the person with the fewest votes in a three-way race is knocked out, then it becomes a two-candidate vote. 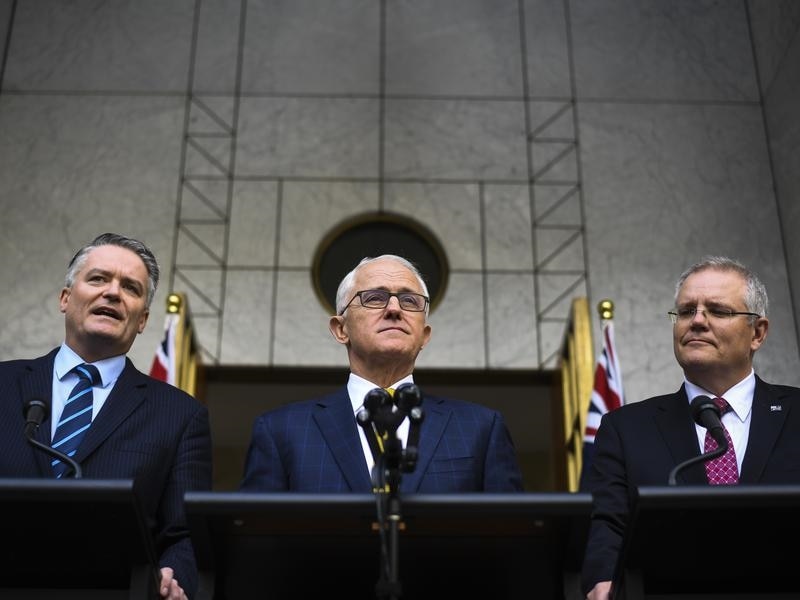 * The winner of the Liberal partyroom ballot will become parliamentary party leader.

* Malcolm Turnbull would then tender his resignation to the governor-general and resign from parliament.

* The new Liberal leader would be recommended to the governor-general to become Australia's 30th prime minister.

* In parliament, which does not sit again until September 10, Labor could move a "no confidence" motion to test the government's majority. The Liberal-National coalition has a one-seat majority but some Nationals MPs have pledged to sit on the crossbench if the prime minister changes.

* The government already has budget "supply" until July 2019.

* The governor-general would issue the instrument of appointment and oath of office to the new prime minister, and most likely swear in a handful of key cabinet ministers.

* If Turnbull resigns immediately a by-election will be needed in the NSW seat of Wentworth.