Fijian Prime Minister Frank Bainimarama has issued a call for highly-developed nations to avoid doing what is easy in the wake of COVID-19, and to commit to more ambitious climate change targets. 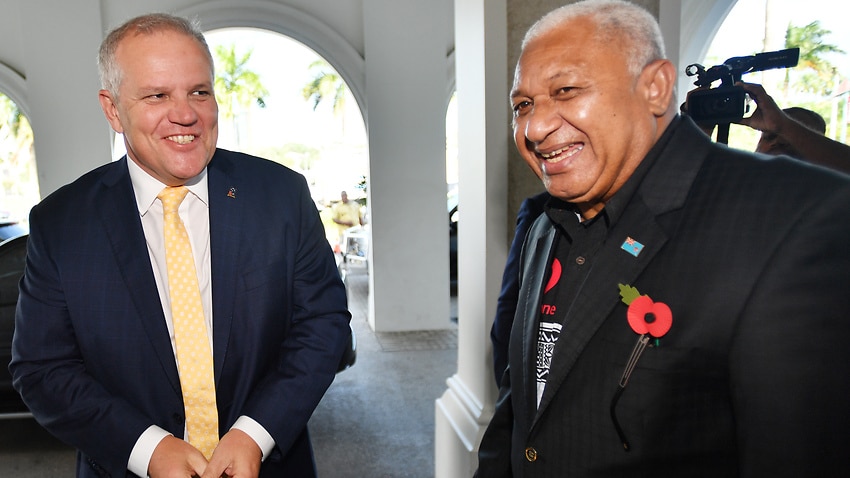 Fiji's Prime Minister Frank Bainimarama has called on his "friend" Scott Morrison to do more to limit Australia's carbon emissions, weeks after the government rejected adopting a zero-emissions by 2050 target.

Addressing a virtual renewable energy summit on Wednesday, Mr Bainimarama said the Pacific was facing a dual crisis - a "crippling pandemic and a warming planet".

He warned against reverting to "what is easy" in the wake of the COVID-19 economic fallout, and instead called for "big, bold, blue and green" ideas to tackle the existential threat of climate change.

"Much like a face mask in a country struggling with a large-scale coronavirus outbreak, clean energy investments yield far-reaching economic, social and health benefits that will span generations," Mr Bainimarama said.

As an example, he pointed to New Zealand Prime Minister Jacinda Ardern, who he commended for her pledge to transition entirely to renewable energy sources by 2030.

"Nations like our neighbours in New Zealand get it," he told the conference. “So I ask Australia, and all highly developed nations of the world, what is your true competitive advantage?”

Earlier this month, Mr Morrison declined to commit to a target of zero net emissions by 2050 - a goal adopted by all Australian states and the federal opposition - despite describing it as "achievable".

Mr Morrison has instead pushed for a gas-led recovery to the coronavirus crisis, arguing it will improve energy affordability during the nation's economic recession and assist in job creation.

"I know people get very focused on the politics of these commitments, but what I'm focused on is on the technology that delivers lower emissions, lower costs and more jobs," Mr Morrison told ABC's Insiders on 20 September. "I'm more interested in the doing."

But Mr Bainimarama, whose country was the first to ratify the UN Paris Agreement, said clear targets were essential to keep countries accountable in the "fight for our lives".

"Let me be clear, when we talk about zero emissions targets, any later than 1 January 2050 will be too late to achieve net-zero emissions. These aren't aimless targets - they are life or death deadlines backed by science," he said.

Despite the calls for more action, Mr Bainimarama said he had empathy for Mr Morrison and other Australian leaders as they navigated the struggles wrought by COVID-19.

"We share the same burden: to try and revive our economies. The same struggle keeps us up at night: to restore jobs to our people as they go through immense hardship," he said.

"As I've said about the fight against climate change, we are all in the same canoe. Never has that been felt more than today."