The Syria Civil Defence marked their Oscars win by urging the world to stop the bloodshed in the war-torn country. But not everyone agrees the organisation is helping to alleviate the Syrian conflict.

Minutes after winning the Oscar for Best Documentary Short, there were reports the White Helmets had already resumed their rescue operations.

When "The White Helmets" was announced a winner of the academy award, our team in Ariha, Idleb was rescuing a child. And that's the real win https://t.co/BapxDiFuMS

The volunteer group, that has become synonymous with countless civilian rescues in war-torn parts of Syria, used their Oscar win to call for an end to the conflict.

In his Oscars acceptance speech given via video link, Raed Saleh said the organisation had rescued 82,000 civilians and called for support "to pressure governments to end the ongoing Syrian conflict, and to hold the criminals who have committed human rights violations to account".

However, claims refuting the credibility of the White Helmets as a humanitarian organisation have resurfaced since the Oscar win, with some saying the organisation is a US-funded terrorist group.

Dr Tim Anderson from the University of Sydney is a staunch believer of these claims, saying the Oscar decision is "deeply cynical" because the White Helmets is another front group for Al-Qaeda in Syria.

"It's a PR front for the group, the same groups that they’ve [Al-Qaeda] been arming and financing in Syria to try and overthrow the Syrian government."

Dr Anderson claims the rescue footage released by the group is staged and motivated by a need to maintain the war story that the Syrian army is bad and these groups are good.

"There’s a lot of evidence that shows the same people who are carrying arms and carrying out executions of civillians and soldiers in Aleppo have been putting on the white helmet and jacket and presenting these staged rescues of children which we've seen quite a lot of now."

However, Professor Scott Lucas from the University of Birmingham said claims like Dr Anderson's are "the product of disinformation and spurious inference".

In a piece written for The Conversation, he said Russian and Syrian state outlets were labelling the White Helmets as allies of terrorism through a "cycle of disinformation", including their international funding. He says that while the White Helmets’ origins were certainly international, by membership, the group is very much Syrian. Who are Syria's White Helmets, and why are they so controversial?

"That the White Helmets receive assistance from the US government’s Agency for International Development – something they have not denied – apparently means they’re American puppets, even though they draw a range of support from around the world," he wrote.

"The fundraising support they get from a PR firm [is] somehow proof that they are the vanguard of a proxy war fought by a US military-industrial complex."

Professor Lucas says Damascus’ strategy is not just about fighting rebels on the battlefield, but also to destroy any semblance of organised services and infrastructure in opposition-controlled areas.

He says even if the White Helmets are unarmed, they're still a threat to the Assad regime.

"White Helmets centres have been regularly attacked over the past year. Last April, one set of missile strikes destroyed a centre west of Aleppo city, killing five volunteers and destroying equipment and vehicles. The 'double tap' attacks, hoping to kill and maim the rescuers, are now routine."

Dr Anderson believes the film's Oscar win will draw more attention to the White Helmets and is urging people to do their independent research.

"There’s a war going on. All wars are associated with this kind of propaganda."

"Unfortunately our society has been inundated with this and it’s been very one-sided," he said.

"Look a little bit more closely and look for the evidence about this particular group and you''ll find the answers."

Professor Lucas, on the other hand, said the only “crime” the White Helmets had committed was calling for zones protecting civilians and their "firm declarations" that they don’t affiliate with any government or NGO.

He said while the negativity surrounding the White Helmets was "menacing", it didn't impact the people on the ground whose focus was on the next mission. 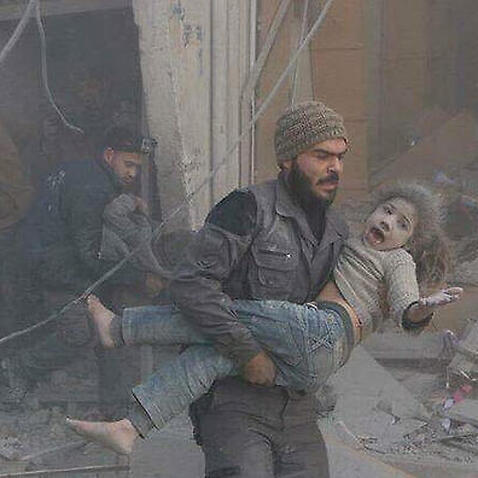