It's been a quiet start to voting on whether to change the name of the Former Yugoslav Republic of Macedonia.

Macedonians are having their say on whether to rename their country North Macedonia, in a bid to settle a long-running row with Greece and unlock a path to NATO and EU membership.

The vote is an emotional moment for a country that has struggled for recognition of its name since its birth in 1991, when the former Yugoslav republic declared independence.

Voters began trickling in to schools and other polling stations around the country after polls opened at 7am local time.

Just visited a polling station in Skopje- as you'd expect, those casting a ballot were yes voters. People against the name change deal with Greece are almost all joining the boycott and staying at home. #Macedonia @SBSNews pic.twitter.com/FLHiVqKRXc

"I hope that the result will be positive. This referendum will change something if it opens the door to Europe and NATO," Olivera  Argirovska, a 74-year-old retired nurse, told AFP after casting her ballot in a high school in the capital Skopje.

"It will change things for the youth."

Athens accuses Skopje of stealing the name of its own northern province also called Macedonia.

The dispute dives deep into history, with both countries vying for claims to Alexander the Great's ancient empire of Macedon, which spanned their territories. A woman casts her vote in a referendum on the country's name change at a polling station in the village of Zajas.
AAP

But in June, Macedonia's new premier Zoran Zaev and his Greek counterpart Alexis Tsipras reached a landmark compromise under which Athens would drop its objections to Macedonia joining the EU and NATO in return for the name change.

Zaev is billing the vote as a painful but historic opportunity to break the 27-year-old stalemate.

"Today is a beautiful day, a beautiful holiday for the country. Today the citizens are going out to decide on their future," Zaev told the press after casting his ballot in his hometown of Strumica, an eastern city where he was once mayor.

Few Macedonians are enthused about the new name, saying they have been unfairly bullied by Greece.

But a desire to anchor their future to the West - and the economic prosperity that it could bring - is a driving force behind the 'yes' vote in one of Europe's poorest nations.

"We cannot really say it is fair, but the EU and NATO matter more for all of us, so let's move forward," 28-year-old Abedin Memeti said ahead of the vote.

The referendum is not binding, but a 'yes' majority would give parliament a political mandate to change the constitution. 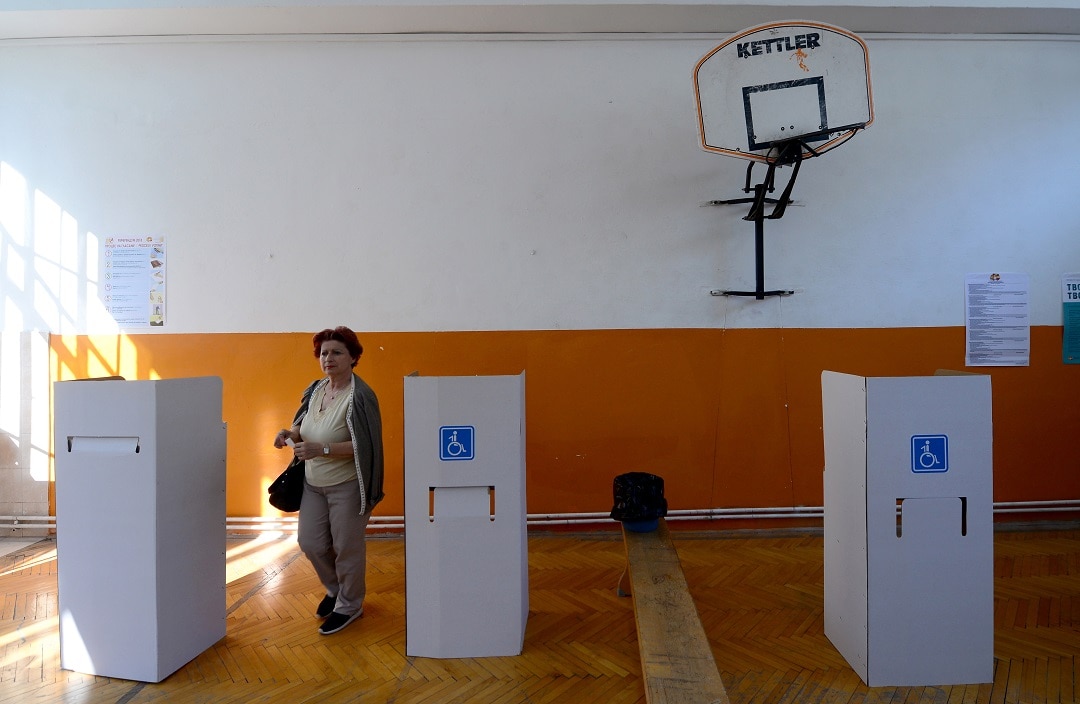 It was a quiet start to voting in the Former Yugoslav Republic of Macedonia.
AAP

If the deal is backed in the referendum and is ratified by two-thirds of MPs, the Greek parliament will be called on to give the final stamp of approval.

Sunday's vote is being watched closely across the border in Greece, where nationalists staged a protest against the deal earlier this month.

"We hope for a positive outcome for the proceedings to progress with the constitutional review," Greece's government spokesman Dimitris Tzanakopoulos said on the radio.

"Any other result would create a disturbance," he added.

Turnout in the Macedonian referendum is just 8.1% at 11am. Very low. Could be a sign the boycott campaign, which gained momentum in recent weeks, has been more effective than many predicted. @SBSNews #macedoniareferendum

While the Macedonian government plans to call any significant majority in favour of the deal a success, the right-wing opposition may question the vote's credibility if turnout is below 50 percent.

Some critics of the name deal have been calling for a boycott, including President Gjorge Ivanov, who is allied with the nationalist opposition.

Massive emigration in recent decades could also affect turnout numbers, with nearly a quarter of the 2.1 million population estimated to live abroad.

Less than 3,000 of those overseas have signed up to vote.

Europe and the US have campaigned hard for the deal, with many leaders passing through Skopje this month to urge Macedonians to seize the "historic" opportunity.

NATO has already issued an invite - on hold until the deal passes - while EU accession talks are scheduled to begin next year. What's in a name? Macedonians prepare to vote on name change

The West is keen to have another foothold in the Western Balkans, a region where Russia, which is opposed to NATO expansion, has historically had influence.

At home, those in favour of the deal say a desire for an EU future is helping bind ethnic Macedonians with the Albanian minority, who are broadly pro-West.

While Macedonia avoided the full-scale inter-ethnic wars that rippled across the region during the collapse of Yugoslavia, it was roiled by an Albanian insurgency in 2001 that left more than 100 dead.

"This is the first time I am seeing Macedonians and Albanians campaigning together for common goals," Besa Arifi, a law professor, told AFP.

"This will give us more opportunities to unite all citizens around shared values," he added.