Dozens of asylum seekers on Manus Island have protested power cuts at the detention centre and potential resettlement in Papua New Guinea.

Dozens of men held at the centre marched around the compound on Tuesday chanting "bring power back" and "we don't want PNG", a video shared by advocates from inside the compound shows.

With the Australian-run centre due to shut in October, the remaining 800 men on Manus are being urged to relocate to a temporary transit centre in the main town of Lorengau.

Water and power supplies were cut off at the centre’s largest compound on Monday, Reuters has reported.

PNG Prime Minister Peter O’Neill has said those deemed legitimate refugees would be resettled in the US under the deal brokered by the Turnbull government with the Obama administration, while others would be returned back to their country of origin.

#manusprotest Hundreds of refugees are gathering in Mike compound to tell Australian gov to stop pressuring people to live in PNG pic.twitter.com/SaeZeEoFLG

The “last remaining” people have been offered resettlement in PNG, he said.

The Tuesday protests were peaceful to send a message to the Australian government to “stop pressuring people to live in PNG,” Iranian Kurdish journalist inside the compound Behrouz Boochani said on Twitter.

#Manusprotes Hundreds of refugees are gathering in Mike compound to tell Australian gov to stop pressuring people to live in PNG pic.twitter.com/pOG0R6foLh

Asylum seekers fear PNG is not safe for permanent settlement.

There were also reports that three refugees were attacked and robbed in separate events on Manus Island at the weekend, including a Sudanese asylum seeker who suffered leg wounds after being attacked with a machete, an Iranian who was injured in an armed hold up and another man robbed while walking.

The Department of Immigration and Border Protection has been contacted for comment. 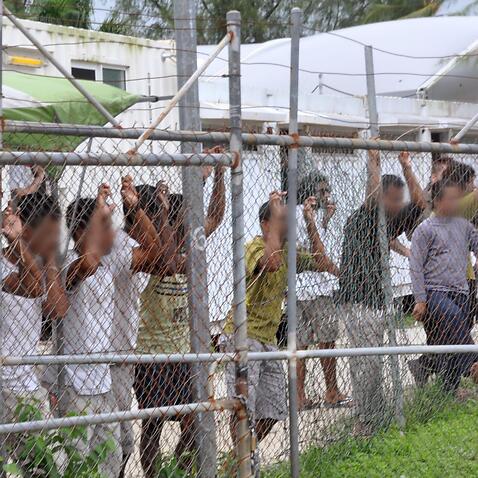