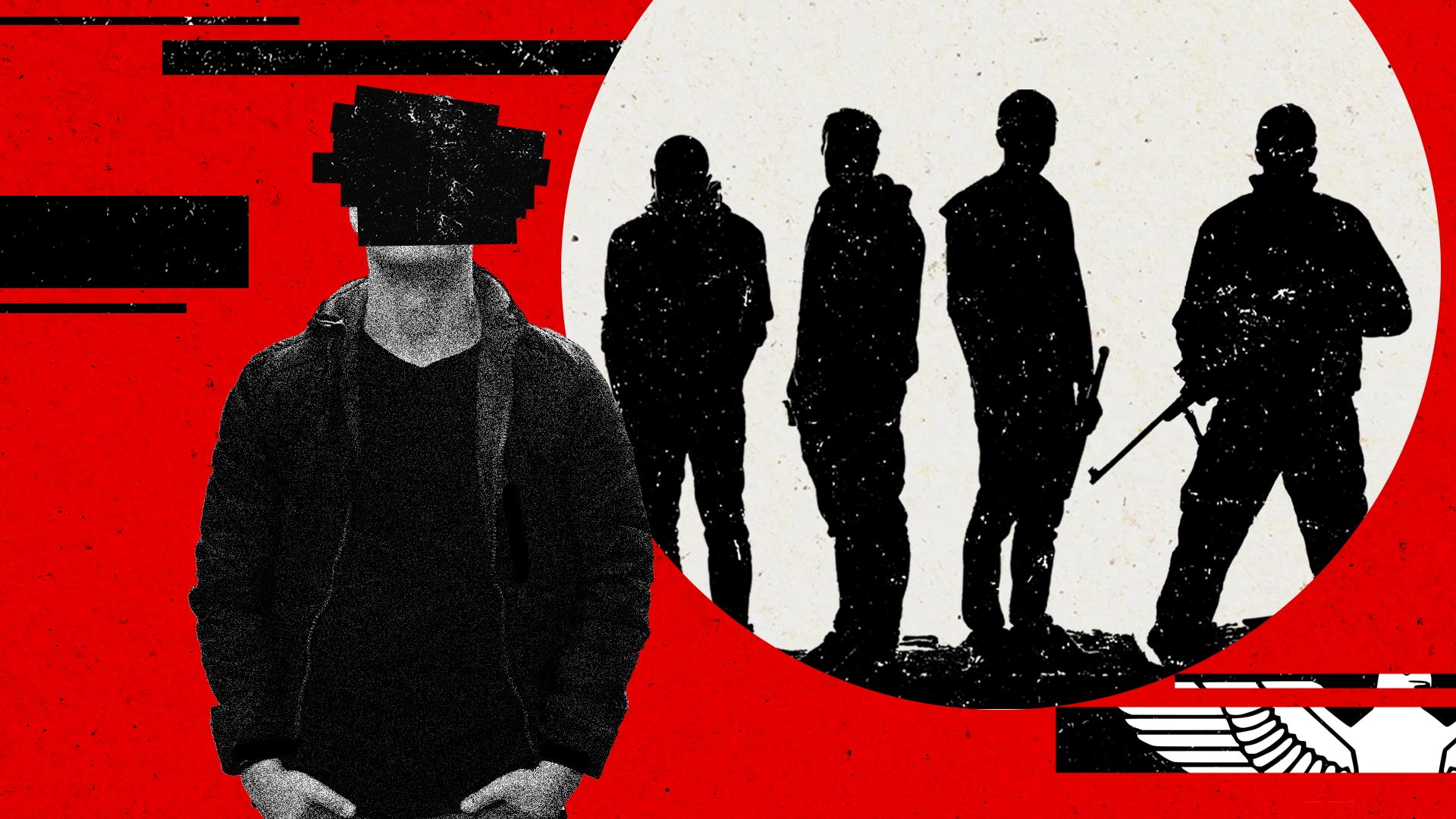 EXCLUSIVE: Racism, guns and paranoia; an SBS News investigation has uncovered an underground network of armed Australian men who share interests in self-help fitness and white supremacy that has never been reported on before in the media. Here, one member speaks out over concerns views within the group could one day cross the barrier into violence.

In an unassuming semi-industrial complex in an outer suburb of an Australian city, you might hear the blast of heavy metal music and the grunts of a small group of men as they work out and practice martial arts.

They are working professionals, small business owners, and fathers.

It could be a normal gym if it wasn’t for the runic symbols and code words tattooed on the arms of some of those training.

Publicly, the men say they’re part of a self-help fitness movement, but privately, one group member tells SBS News, it serves as a gateway to indoctrinate men into a growing white supremacy “cult”.

The group has been engaging in physical training. Source: SBS News

SBS News has chosen not to name the group. This is the first time it has been the subject of media reporting in connection to neo-Nazism.

Secretly, says Mark (not his real name), some group members have been preparing for what they believe will be an upcoming race conflict in Australia. Some have gun licences and others have been attempting to buy firearms illegally.

And while the group says its training is only in 'preparation' for conflict, Mark worries about a member one day acting out.

“My big fear right now is there’s only a matter of time before one of these guys takes matters into his own hands,” he says.

There’s only a matter of time before one of these guys takes matters into his own hands.

The group has “cells” in multiple states across Australia, he says, and SBS News has seen evidence of them communicating with white supremacy groups in the United States and Europe.

More than one of the overseas groups has been listed as a terrorist organisation and another as a hate group.

Mark is telling his story as the Australian Federal Police’s Counter Terrorism & Special Investigations Command revealed to SBS News there has been a 750 per cent increase in its caseload of ideologically motivated extremism over the past 18 months. And that is only expected to climb.

Neo-Nazis, or ‘new’ Nazis, share racist and ethno-nationalist views similar to those of the Nazi Party which was active in Germany until 1945.

SBS News has seen photos of men in the wider network Mark's group is in posing with Nazi flags and swastikas. Others show them making the hand sign of white supremacist group the Ku Klux Klan, as well as experimenting with weapons including high-powered firearms.

Footage also shows them engaging in paramilitary training in the Australian bush, and encrypted messages reveal discussions with overseas terrorist organisations about the use of explosives.

The group has made efforts to buy firearms illegally. Source: SBS News

Messages between group members seen by SBS News also talk about “cleansing” Australia and refer to ethnic and religious minority groups as “unters”, a reference to the Nazi Germany word ‘untermensch’, meaning sub-human.

Mark is a self-confessed ethno-nationalist and says he initially found common ground with members of the group over his anti-immigration views - but now he feels uncomfortable.

“I signed up for a brotherhood of self-betterment, concerned about the failures of multiculturalism in Australia. I feel like things are now getting out of hand.”

He says societal disruptions in Australia caused by the COVID-19 pandemic - including unemployment, lockdowns and mandatory vaccination - have intensified the racist rhetoric of some of the group’s members.

“COVID was like hitting the fast-forward button ... just evidence to the movement that society is weak and a collapse is close.”

“It starts to get more and more violent. There is this besieged mentality, like we are under attack, so we need to prepare, train and be ready for a war really soon.”

Mark's group has a long list of ‘enemies’, he says, but a major focus of their hatred in communication SBS News has seen is of Muslims - and it goes back some years.

Adel Salman is the president of the Islamic Council of Victoria and has friends whose loved ones died in the attacks. He says the threat of underground groups like the one Mark is in is not lost on Australia’s Muslim communities.

“Muslims feel threatened. We don’t have to look back to the very tragic events in Christchurch to see what the results of that hatred can be.”

Such requests by Australian prime ministers, including Scott Morrison, created a sense of “otherness” and “complicity” that all Australian Muslims held extremist sympathies, and helped justify hatred of Muslims by the extremist right, he says.

“The narrative has been somehow Muslims have been problematic and that we need to somehow find a solution to the Muslim problem. And the damage done has been extensive; it’s created division and a sense of alienation.”

Mr Morrison did not respond directly to questions about such comments made by leaders. He told SBS News in a statement: “The threat of ideologically motivated violent extremism is real and growing, including from extremist nationalists and racists groups and individuals, and I will continue to always call it out and work to stop it”.

Members of the group refer to Muslims in derogatory terms. Source: SBS News

About 605,000 people in Australia identify as Muslim according to the 2016 census; 2.6 per cent of the population.

“Australia is a nation made up of so many rich cultural backgrounds, we are the most successful multicultural nation in the world and that’s what makes Australia so strong," Mr Morrison said.

“The views espoused by Nazi and white supremacist groups are disgusting, repugnant, racist and discriminatory – they have no place in Australia."

Mr Salman said groups such as Mark's “represent a near and present danger”.

“They are planning to cause harm, they are growing, and they are a network of groups, they may not be one organisation but they are connected. They’re sharing material and effectively they are inciting each other and they are unanimous in their hatred of Islam.”

Dr Mario Peucker is a senior research fellow at Victoria University and has been tracking neo-Nazi movements in Australia for years. He says what separates “cells” such as the one Mark is in from some other elements of the far-right in Australia is their capacity to meet face-to-face.

“We are not talking about groups that just talk a lot on social media pages. They meet, they hang out together and develop a sense of community of purpose, of urgency - they meet in the woods.”

He says the survivalist focused nature of the groups makes them potentially dangerous in the climate of a pandemic.

“If these people have access to firearms and know how to use them, then obviously the opportunity to commit an act of violence is greater than if they are just talking.”

“These groups are cult-like, and that can potentially make them more dangerous,” he says.

And he should know.

Mr Schoep was the leader of one of the largest neo-Nazi organisations in the US - the National Socialist Movement - from 1994 until 2019, and is one of the most senior neo-Nazis to turn his back on the movement.

Now he dedicates his time to de-radicalise far-right extremists, he says to avoid a worst-case scenario.

Jeff Schoep speaking at the Center for the Study of Hate and Extremism in San Bernardino. Source: Supplied

“That worst-case scenario is a mass casualty event.”

“You have to remember, no one wakes up one day and decides to be the bad guy. These guys are operating in their own bubble and think they’re in on ‘the secret’, or that what they are doing is noble.”

“They don’t interact with people who have different views. It feeds their fear of system collapse, and that’s very dangerous.”

He says the legitimate curtain of a fitness culture was a good way of sucking in people who may not normally interact with neo-Nazis.

The group say its training is only in 'preparation' for conflict. Source: SBS News

“It’s a way of picking people up who are less radical ... For us, it could have been illegal immigration. People who weren’t Nazis but had those grievances.”

“The way I thought about it at the time was, ‘we got them in the door, now we can feed them the rest’ … It’s very cult-like.”

For Mark, he still holds anti-immigration views and remains a member of the group, but says he's speaking out over fears its growing obsession with violence could get out of control.

“You haven’t heard of us, but you hadn’t heard of the Christchurch shooter before March 15th 2019 either.”

“It’s those you don’t hear about that should cause the most concern.”

Do you know more about this story? Contact henryzwartz@protonmail.com or henry.zwartz@sbs.com.au

Those wishing to report suspected terrorist activity in Australia are encouraged to contact the National Security Hotline on 1800 123 400.