The federal government has broadened the category of applicants for partner visa to include same-sex couples just days after same-sex marriage was legalised in Australia.

The Immigration Department has updated its application process to allow same-sex partners to apply for Partner visas (subclasses 100, 309, 801 and 820) and a Prospective Marriage visa (subclass 300).

Under the changes, a person in a same-sex marriage you can apply for a visa as their partner's 'spouse' rather than as their 'de facto partner'.

Those in a same-sex relationship with a genuine intention to marry their partner in Australia can apply for the Prospective Marriage visa.

Previously same-sex partners had to resort to applying for a permanent interdependency visa and fulfil stricter criteria to prove the existence of an 'interdependent relationship'.

"The same-sex couples that I know who have been through a process for applying for a visa Interdependency have really had a tough time of it. It has been an expensive process for them," Mr Croome said.

"It has taken a long time and they need to prove they are in a relationship to much a higher level than a heterosexual couple would have to prove."

Mr Croome said the hurdles had been hard to overcome.

"That proof can sometimes to be difficult to obtain if the foreign partner is from a country where homosexuality is, for instance, is criminalised," he said. 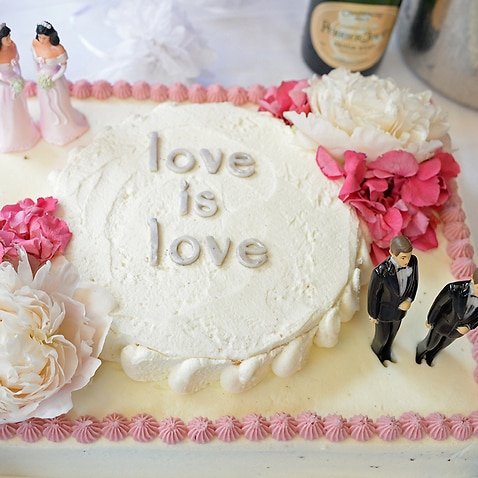 Same-sex couples off to wedding registries

"Now that same-sex partners who are married will be able to have their marriage count towards their visa application, I think a lot of those difficulties will be removed.

"And a lot of the pain and hassle that same-sex partners have gone through will be removed.

"It will mean that those partners are able to reside together in Australia like any other committed, married couple."

Human Rights Law Centre lawyer Lee Carnie said the changes were likely to result in an uptick in applications from same-sex partners.

"So hopefully it will mean we will have a fairer system under our immigration laws as well for the loving couples who just want to stay together and live in Australia."

Same-sex couples lined up on Saturday to register their one-month intention to wed, with the first same-sex marriages to take place from January 9 next year.

"There were a number of other amendments, other changes that will come into effect now that we have marriage equality. But hopefully they will be implemented fairly quickly," she said.

"There will be news about all the different ways in which these types of discrimination against unmarried, unrecognised couples will be removed from our laws.

"It is really fantastic to see these (changes) come into effect."