Politics in the United States has long been dominated by middle-aged white men and accused of not representing the American public. Here are just some of the candidates running in the 2020 election who could start to turn the tide.

The 116th and current US Congress is the most diverse on record.

Of its 535 members (100 in the Senate and 435 in the House of Representatives), there are 131 women, 51 Latin Americans and 20 people who are either Asian-American, Native American or Pacific Islander-American - all of which are record highs. There are also 56 African-Americans.

But despite those strides, there are still calls ahead of the 3 November election for more diversity to be realised, in order for it to be truly representative. Mondaire Jones, Young Kim and Cori Bush are all vying for seats in the 117th US Congress.
AP/Flickr/Getty

The average age of members of the House of Representatives at the beginning of the 116th Congress was 57.6, according to the Congressional Research Service. The average age of those in the Senate was 62.9 years.

“There is a lot of inertia that keeps older white men in their seats in Congress for a long time,” Mr Brennan said. “The snapshot of the US you get by looking at Congress is one that hasn’t existed for a long time.”

But with many women, people of colour, LGBTQI+ candidates and younger Americans running in 2020, that could soon change.

If elected, Democrat Cori Bush would be Missouri’s first female African-American member of the House of Representatives.

The registered nurse and pastor, 44, was a prominent figure during protests against the police killing of unarmed 18-year-old Michael Brown in Ferguson back in 2014, even treating injured people on the streets. She has continued to take up activist roles this year amid the resurgence of the Black Lives Matter movement.

“With the climate of our country and our world, I worry about my children," she told the Guardian in August. "My son is 20 years old, he is taller than me. He’s a black boy. I worry about [him], every single day. Every minute of the day. I’m not exaggerating.”

How it started: How it's going: pic.twitter.com/133SJuECZC

Ms Bush has fallen short of winning in previous Congressional campaigns, but this time is expected to secure a victory.

In the primaries, she successfully unseated Democrat Lacy Clay, whose family had represented Missouri's 1st Congressional District for 50 years. Mr Brennan said the victory was “about the fifth time that’s happened since [Donald] Trump was elected”, reflecting a growing trend of non-career politicians aligned with social movements running for office.

“A lot of the candidates on ballots throughout the Trump term are candidates who were activists that were active in 2014 around the time of Ferguson and have been lifted up by the organising platforms from those social upheavals,” he said. George Floyd's brother urges US Congress to 'stop the pain'

Ms Bush featured in a 2019 documentary called Knock Down the House, which followed the grassroots 2018 mid-term campaigns of three other aspiring Congresswomen, including Alexandria Ocasio-Cortez, as they tried to dislodge established politicians.

She is pledging to help enact federal policies to reduce discrimination and inequality and create “a culture shift away from punishment” through initiatives such as defunding the police.

In one of his campaign ads, Democrat Mondaire Jones lays out exactly why he wants to run for Congress: “I’m black and I’m gay and I don’t see people like me in office very often”.

Mr Jones, 33, is poised to make history as one of the first black, openly gay people elected to the House of Representatives in November. He is running for election in New York's 17th Congressional District, which is overwhelmingly Democratic. He has secured some big endorsements from Democratic heavyweights such as former President Barack Obama, as well as senators and former presidential candidates Elizabeth Warren and Bernie Sanders.

The attorney - who worked in the United States Department of Justice during the Obama presidency - is pledging to fight for climate action, people below the poverty line, the LGBTQI+ community and people of colour.

White kids used to spit on my grandfather while he walked to school in the Jim Crow South.

Ritchie Torres could join Mr Jones as a black LGBTQI+ trailblazer if he wins New York's 15th Congressional District in the Bronx, one of the US’s poorest districts in terms of median income.

He is one of the council’s five openly gay members. At age 25, he became the youngest ever elected official in New York City.

“I feel like if I'm going to be a congressman who represents the South Bronx, I have to be the most visible and vocal champion of the urban poor and of working people,” he told NBC News last year.

The Republican Party has fewer candidates from minority communities but could nevertheless see Young Kim become the first Korean-American woman to sit in federal Congress.

Ms Kim, 57, ran as the Republican candidate in California's 39th Congressional District in the 2018 mid-term elections but lost to Democrat Gil Cisneros. The two are facing off again in 2020.

You will be receiving your ballot in the mail this week. Make sure your voice is heard by voting when you receive it! #CA39
Find more information about voting:
OC→ https://t.co/buNkbVNJaf
LA County→https://t.co/D7Sfw1EmKm
San Bernardino County→ https://t.co/TIzMscuWcE pic.twitter.com/oRIjvmJRNV

“This district is not as far left as many political pundits in Washington would like people to believe,” Ms Kim told The New York Times last year.

In 2014, she became the first Korean-American Republican woman elected to the California state legislature.

Ms Kim, who was born in Incheon, in northwestern South Korea, and describes herself as a proud immigrant, wants to address rising homelessness in California, strengthen the local economy and secure more STEM education funding for schools.

If she can turn the 24th Congressional District in Texas blue for the first time since 2005, Democrat Candace Valenzuela would become the first black Latin American woman to sit in federal Congress.

She’s up against Beth Van Duyne, who scored an endorsement from Mr Trump during the primaries.

Ms Valenzuela experienced homelessness as a child, something she recounts in one of her campaign ads, and racked up big medical debts following a major car accident in her teen years.

My congressman has been a politician since before I was homeless, sleeping in a kiddie pool outside a gas station.

The former local school board representative believes her background as a working-class political outsider who overcame difficulty can win over voters.

“My story does resonate,” she told The Texas Tribune last month. “As soon as my constituents hear my story, it’s incredibly easy for them to relate.”

She is running on a platform that includes pledges to push for better housing for vulnerable people, better public education and healthcare, and criminal justice reform.

How likely is a more diverse 117th Congress?

According to the Center for American Women and Politics, a record 298 women are running for a seat in the House of Representatives with a major party. Mr Brennan said while Congress is still “a long way off in terms of parity when it comes to ethnicity and women”, things are slowly changing.

“A lot of people called the 2018 mid-terms a ‘pink wave’. We saw so many women come into Congress,” he said. “But still not anywhere near what parity or a genuine reflection of what the US looks like.” Mr Brennan said COVID-19, which has killed more than 220,000 people and infected more than eight million in the US, has been disproportionately impacting minority communities and would likely influence who they vote for.

“It has provided young people with the shortest policy pipeline they've seen in their lives, meaning that because things have been so dire they feel the effects of policy quite quickly. This has been an enormously politicising moment and it will be felt for some time to come.” 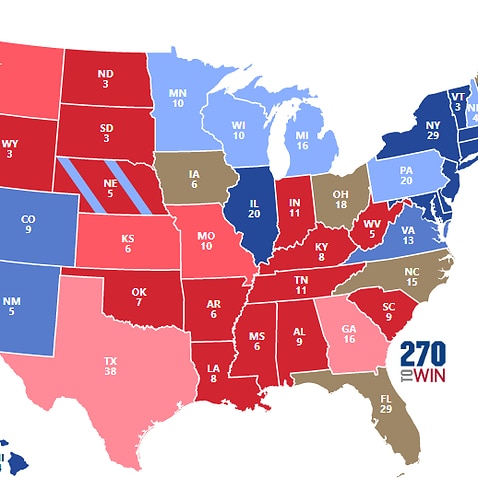 Mr Brennan said while the resurgence of the Black Lives Matter movement in 2020 might not have an immediately visible impact on the make-up of Congress, it likely will further down the track.

“Candidates that have ground through the platform-raising that takes years, that have had their political rungs aligned with this enormous social movement we are seeing at the moment, will benefit immensely,” he said,

“Down the track, we will see people who've become politically involved during this resurgence of Black Lives Matter for decades to come.”