Melbourne's St Patrick's Cathedral has been vandalised, emblazoned with the words "Rot in Hell Pell" and "no justice", as Cardinal George Pell left the city for Sydney following his acquittal yesterday.

Cardinal George Pell has wasted no time getting on with life after acquittal, leaving inner-Melbourne this morning.

After waking on his first day of freedom in more than a year, Cardinal Pell left the Carmelite Monastery in the city's east, headed for Sydney.

Cardinal Pell was put up by the Sydney archdiocese after he returned from Rome to fight the abuse charges, having most recently served as Archbishop of Sydney. He also has family in NSW. 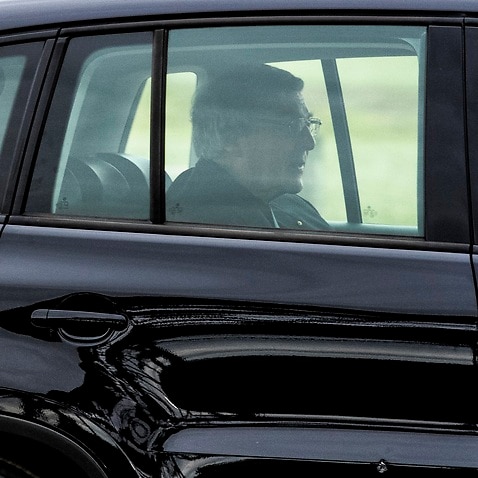 "Rot in Hell Pell" and "no justice" was emblazoned on the doors of the cathedral, which was at the centre of allegations the cardinal abused two choirboys in the 1990s. The words "the law protects the powerful" were also spray-painted on the cathedral forecourt.

A child's tricycle was also fixed to the gate of the Carmelite Monastery.

The High Court yesterday ruled there was insufficient evidence to convict Cardinal Pell, quashing five convictions. He was freed from prison within hours. 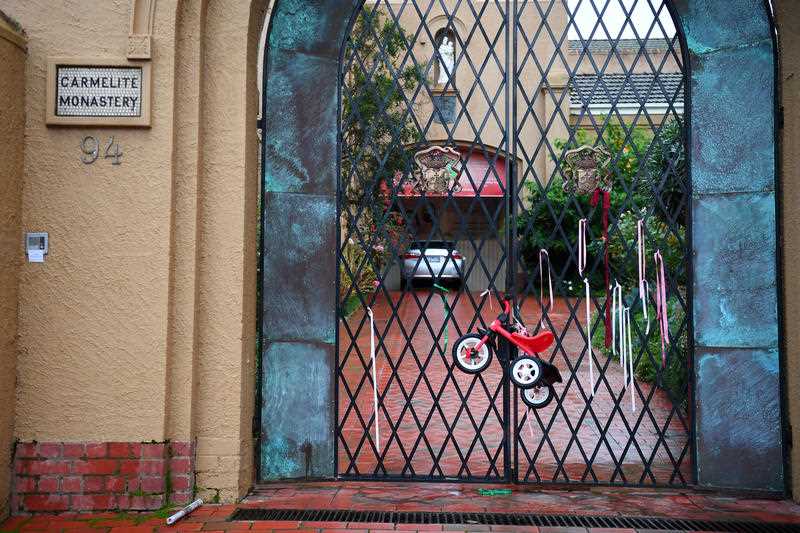 A child's tricycle is seen on the gate of the Carmelite Monastery where Cardinal George Pell stayed in Kew, Melbourne
AAP

Archbishop of Melbourne Peter Comensoli said he wasn't surprised by the vandalism.

"There's such strong emotions around all of these matters," he told Melbourne's 3AW radio.

He said he hoped people would consider the High Court judgment and see the decision in its legal context, but expects people will keep their original positions about the cardinal.

The release of Cardinal Pell, 78, comes in a significant week in the Christian calendar - Holy Week, which marks the end of Lent and the celebration of Christ's resurrection on Easter Sunday.

The spread of the coronavirus means he cannot celebrate Easter with any congregation and any thoughts of a quick return to Rome have been scuppered by international travel bans.

The cardinal's previous position as Vatican Treasurer was filled in his absence, effectively putting him into retirement.

Cardinal Pell's former private secretary Father Mark Withoos told Sydney's 2GB radio if it weren't for the coronavirus crisis "perhaps those involved in this terrible miscarriage of justice would be forced to resign".

Premier Daniel Andrews has refused to comment on the High Court's decision, but today said people, particularly Catholics, had to face the fact there are people who moved predators across parishes.

"Others who knew that it was going on facilitated it and whether they're in jail or not, they'll have to go to their maker knowing they did those sorts of things," he told radio station Triple M.

Cardinal Pell is yet to speak publicly but released a statement saying a serious injustice had been remedied and he bears no ill will toward his accuser.

In these days of #Lent, we've been witnessing the persecution that Jesus underwent and how He was judged ferociously, even though He was innocent. Let us #PrayTogether today for all those persons who suffer due to an unjust sentence because of someone had it in for them.

The accuser, now a man in his 30s, came forward after the death of the second choirboys in 2014.

"I respect the decision of the High Court. I accept the outcome," he said in a statement.

He also hopes the outcome won't discourage child sexual abuse survivors from coming forward, reassuring them "most people recognise the truth when they hear it".

The Vatican welcomed Cardinal Pell's acquittal, praising him for waiting "for the truth to be ascertained".

Pope Francis offered his morning mass yesterday for those who suffer from unjust sentences, though he did not mention Cardinal Pell by name.

"I would like to pray today for all those people who suffer unjust sentences resulting from intransigence (against them)," the Pope said, speaking before the start of the mass.

More information is available at Beyond Blue.org.au and lifeline.org.au.Anyone seeking information or support relating to sexual abuse can contact Bravehearts on 1800 272 831 or Blue Knot on 1300 657 380.