Deputy Prime Minister Michael McCormack has accepted he was wrong to link a Black Lives Matter rally to the outbreak of Victoria's second coronavirus wave.

Deputy Prime Minister Michael McCormack has been taken to task on the ABC's Q&A program for trying to link a Black Lives Matter protest with the current coronavirus outbreak in Victoria.

Speaking on the program on Monday night, the National Party leader said the protest rally in Melbourne was one of the causes of the outbreak.

But he was quickly pulled up on the last point by host Hamish Macdonald.

"You're drawing a link that I'm not sure is substantiated," Mr Macdonald said.

Mr McCormack said it had been proven there were three confirmed COVID-19 cases from a protest rally which should not have been held due to the health risks and the burden put on police to monitor it.

Also on the panel was Labour Senator Kristina Keneally, the shadow minister for Home Affairs, who said she was "gobsmacked" at Mr McCormack's assertion that the second virus wave in Victoria was linked directly to the Black Lives Matter protest.

"That is just alternate facts, Trumpism, make up your own reality right there. There's no evidence for that," she said. 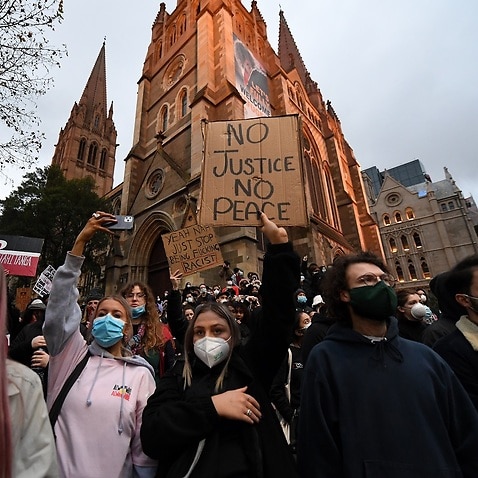 Can the Black Lives Matter protests in Melbourne be blamed for the current outbreak?

Mr Macdonald later told the panel that the Department of Health and Human Services in Victoria had just confirmed there was no link between those at the protest who had COVID and the current outbreak.

NSW records 170 new COVID-19 cases, with at least 42 infectious in the community