A Ukraine International Airlines plane with more than 170 aboard has crashed in Iran.

A Ukrainian airliner crashed shortly after take-off from Tehran Wednesday killing all 176 people on board, mainly Iranians and Canadians.

Search-and-rescue teams were combing through the smoking wreckage of the Boeing 737 flight from Tehran to Kiev but officials said there was no hope of finding anyone alive.

The vast majority of the passengers on the Ukraine International Airlines flight were non-Ukrainians, including 82 Iranians and 63 Canadians, officials said.

The crash occurred with tensions high in the Middle East and shortly after Iran launched missiles at bases in Iraq housing US troops.

However, there was no immediate indication of foul play and Ukrainian President Volodymyr Zelensky warned against "speculating" on the cause of the disaster.

Wreckage left by the crashed passenger jet on the outskirts of Tehran, Iran.
AAP

"Obviously it is impossible that passengers" on flight PS-752 "are alive," the head of Red Crescent told news agency ISNA, adding that 170 passengers and crew had boarded the plane.

Ukraine's Foreign Minister Vadym Prystaiko said the plane was carrying 82 Iranians and 63 Canadian nationals when it went down.

A Ukrainian airplane carrying at least 170 people crashed on Wednesday shortly after take-off from Tehran’s main airport, killing all onboard.
AP

Ukrainian President Volodymyr Zelensky confirmed all those on board the plane were killed.

"According to preliminary data, all passengers and crew members are dead," he wrote on Facebook of the Ukraine International Airlines plane, which was bound for Kyiv.

The Red Crescent teams were assisted by soldiers and firefighters in the effort to recover bodies and recovery efforts continue.

We are following reports that a Ukrainian 737-800 has crashed shortly after takeoff from Tehran. #PS752 departed Tehran at 02:42UTC. Last ADS-B data received at 02:44UTC. https://t.co/qXWHUPGDTu pic.twitter.com/vuAi6TOqTp

"The plane is on fire but we have sent crews," Pirhossein Koulivand, head of Iran's emergency services said.

This seems to be the Boeing 737 belonging to Ukraine
International Airlines, that has crashed after taking off from #Iran's Imam Khomeini airport. pic.twitter.com/byKMNMbt1d

"Everyone is helping so that we can gather all the bodies that have been scattered in a wide area," Mr Fathi said.

Press TV, state television's English-language news broadcaster, said the plane went down in the vicinity of Parand, a city in Tehran province.

The crash was likely to have been caused by "technical difficulties", it reported, citing Ali Khashani, spokesman for Imam Khomeini International Airport. 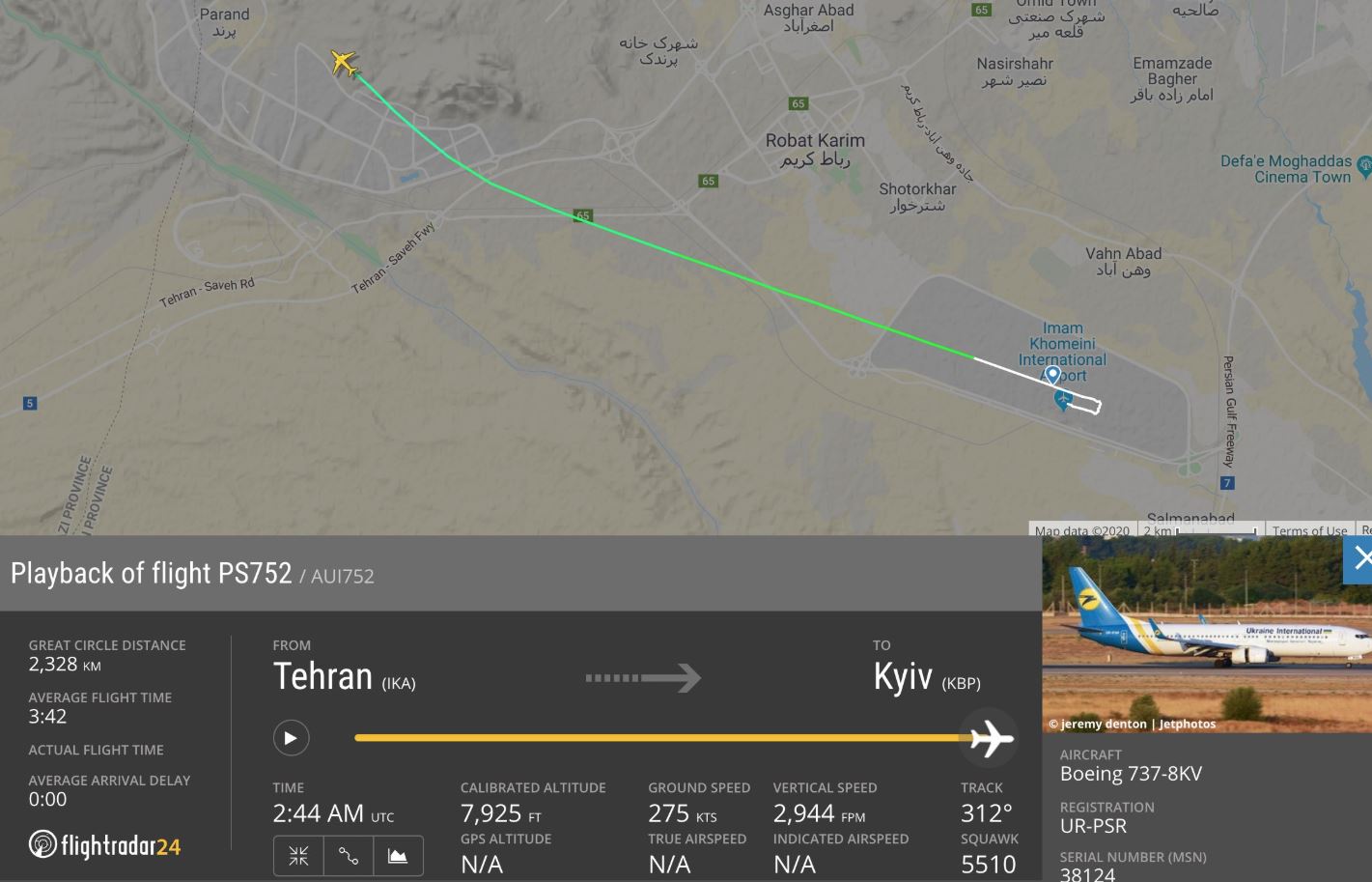 The flighttracker map of the Ukrainian passenger jet.
Supplied

A video aired by the state media broadcaster appeared to show the plane already on fire, falling from the sky.

American airline manufacturer Boeing tweeted: "We are aware of the media reports out of Iran and we are gathering more information."

The aircraft had only just been checked by technicians, according to the airline.

"The plane was manufactured in 2016, it was received by the airline directly from the (Boeing) factory. The plane underwent its last planned technical maintenance on January 6, 2020," Ukraine International Airlines said in a statement.

Ukraine International Airlines, the country's biggest airline and privately owned, said it had "decided to suspend its flights to Tehran starting today" and until further notice.

It was notifying passengers' families and working with aviation authorities "to do everything possible to find the reasons for the aviation accident".

Ukraine's government ordered an investigation into the crash and a sweeping check of "all civilian aircraft" in the country. 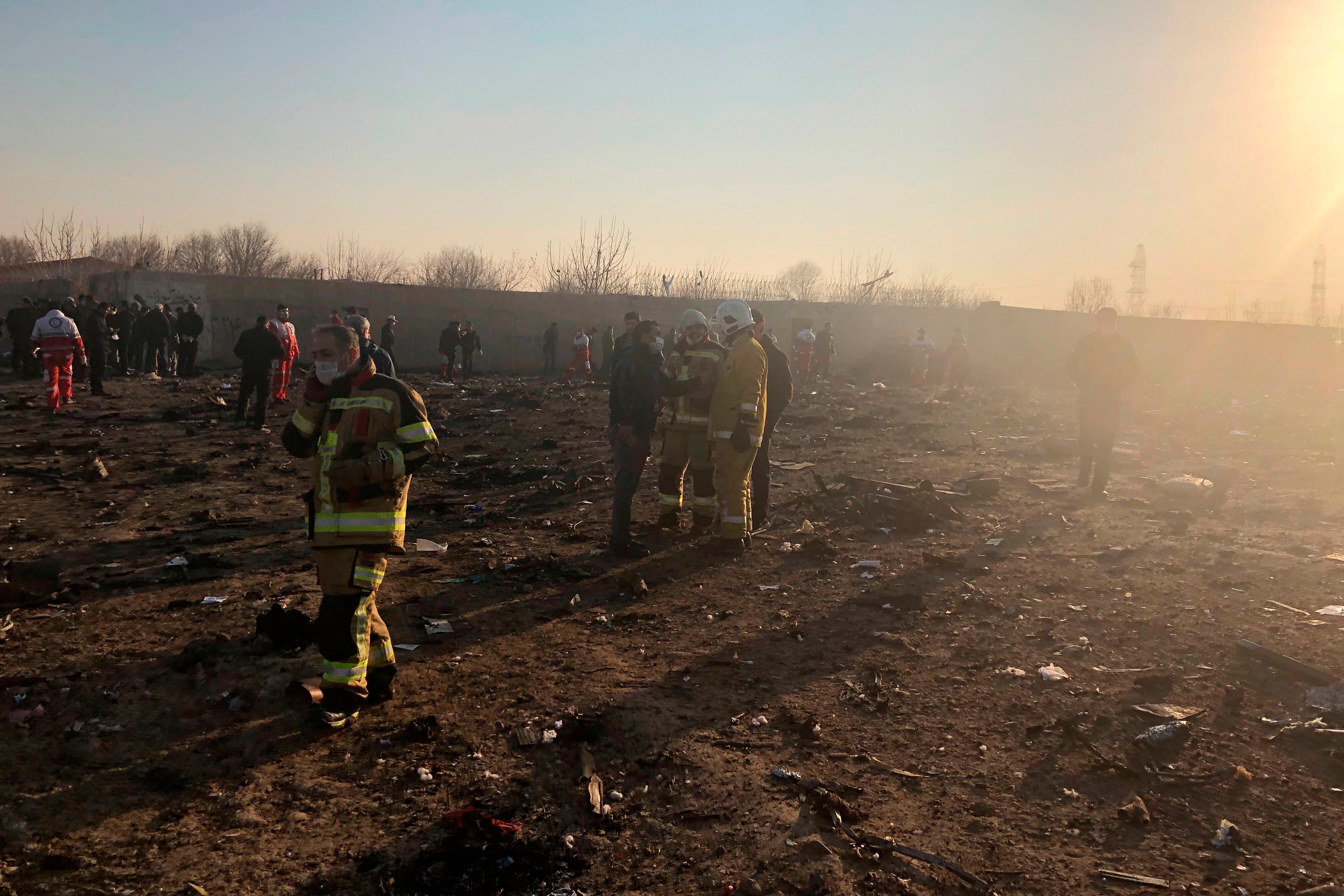 Rescue workers at the scene of the crash.
AP

The Boeing 737-800 is a very common single-aisle, twin-engine jetliner used for short to medium-range flights. Thousands of planes are used by airlines around the world.

Introduced in the late 1990s, it is an older model than the Boeing 737 MAX, which has been grounded for nearly 10 months following two deadly crashes.

The assassination of Soleimani set off an escalating war of words between Iran and the US.

In Tehran, President Hassan Rouhani on Monday warned US President Donald Trump to "never threaten" Iran, after the US leader issued a US strike list of 52 targets in the Islamic republic.

Following the missile strikes, the US Federal Aviation Administration (FAA) said it was banning US-registered carriers from flying over Iraq, Iran and the Gulf after rocket attacks on US forces in Iraq.

"The (FAA) issues Notices to Airmen tonight outlining flight restrictions that prohibit US civil aviation operators from operating in the airspace over Iraq, Iran and the waters of the Persian Gulf and the Gulf of Oman," it said in a statement.

"The FAA will continue closely monitoring events in the Middle East."