The PM says the bill, which will give doctors new authority to order the medical transfers of sick asylum seekers on Manus Island and Nauru, would “completely crumble offshore processing”

Prime Minister Scott Morrison has launched an extraordinary attack on the Opposition, vowing to do everything possible to thwart a bill that would give doctors new authority to order the medical transfers of asylum seekers held on Nauru and Manus Island.

Mr Morrison faces a potentially humiliating and historic defeat on the floor of the parliament after Labor offered its conditional support for independent MP Kerryn Phelps' bill.

Mr Morrison said his opponent Bill Shorten was a "threat" to the safety of Australians and said Labor's support for the bill would turn the offshore detention centres on Manus Island and Nauru into "transit lounges".

"Bill Shorten is a clear and present threat to Australia's safety," he told journalists at Parliament House.

The Phelps bill would allow two doctors to authorise a medical transfer from Manus Island or Nauru to Australia, if they believed they could not get adequate treatment offshore.

Labor will only support the bill if there are changes so that the minister still needs to sign off on each transfer, but explain any refusals to the parliament. Independent Tim Storer is also circulating amendments that include Labor's conditions, which might make it the most likely version of the law to pass the parliament. Mr Morrison said the Coalition and Labor were not on the same page on border protection, setting up a rhetorical contest over the issue in the lead-up to the 2019 election.

"It wasn't that long ago where boats crashed on the rocks and children were dragged up from the sea face down. I remember it. I stopped it," Mr Morrison told reporters in Canberra.

He said the bill would see Australia “abandoning offshore processing as we know it”. 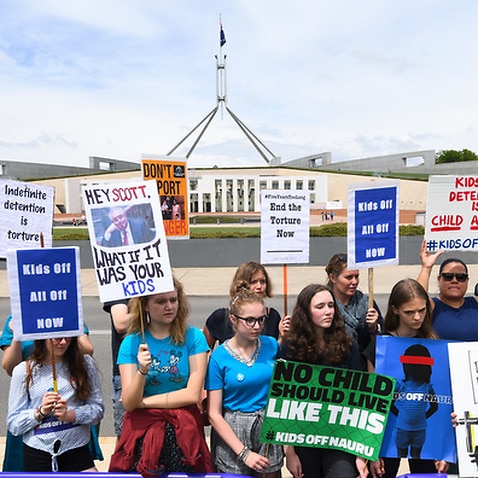 "Labor want to abolish offshore processing as we know it, turn it into a transit lounge. They have learnt nothing," the prime minister said.

“They are weak as, when it comes to border protection."

The House of Reps will debate the bill on Thursday - on its very last sitting day of 2018. It would then need to clear the Senate, which also sits for its final day today.

Its fate will depend on how key crossbenchers vote. With Labor and the Greens on board, they could have the numbers to roll the government on the floor of the House of Representatives in an extremely rare parliamentary event.

With a busy day on the books, the government could be able to filibuster the medical transfer bill into the new year.

The House of Representatives was still passing encryption laws by midday, and still had energy market rules to debate.

"We have certain red lines that we're discussing with the crossbench ... but with some goodwill, we will see a breakthrough."

Labor is insisting the Home Affairs or immigration minister have ultimate approval on any doctor-ordered transfer. But they would have an obligation to explain to the parliament why they refused doctors' orders in each case.

Asked about Mr Morrison's criticisms, Mr Bowen said there was nothing in the medical transfer bill that would threaten national security.

"Scott Morrison would say that, wouldn't he. I mean we believe in strong border protection, we also believe in humanity. You can believe in both," he said.