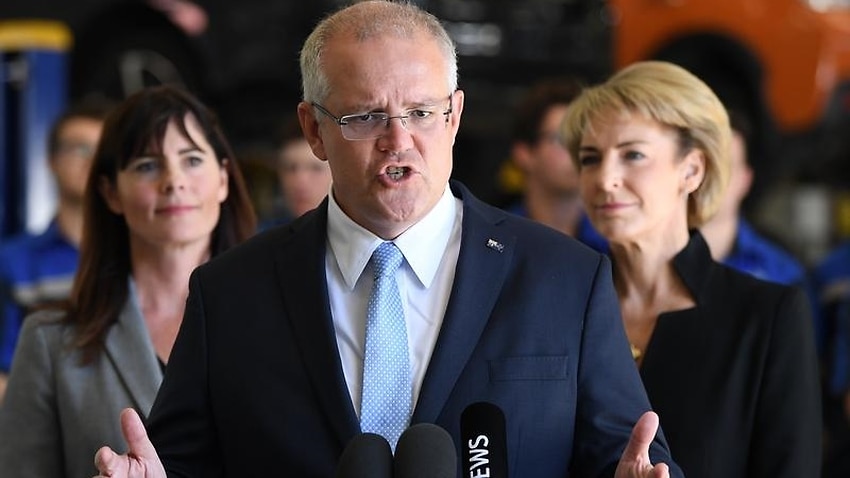 Scott Morrison has nutted out a deal with Labor about election advertising. Source: AAP

Australia is one of the few countries in the developed world without carbon emissions standards for cars and Scott Morrison is promising to keep it that way.

The prime minister ruled out matching a Labor plan to put carbon pollution standards on cars, which almost every other country in the OECD already has.

"We won't be going down this mandatory route where we've got these mandatory vehicle emission standards," Mr Morrison said on Tuesday.

"Vehicle emissions standards of 105 grams per kilometre, where 17 out of the 20 cars being sold today would not meet that standard."

Australia has had petrol emissions standards since the 1970s to remove lead from petrol, but there are no rules measuring carbon dioxide emissions.

Mr Morrison said the coalition supports the take-up of electric cars, and is investing in new public charging infrastructure to make it happen.

"But it will be demand-led, it will be Australians making that choice about the transitions that they want to undertake," he said.

Labor wants to see 50 per cent of all new vehicles sold in Australia to be electric powered by 2030, but Mr Morrison has attacked it as a "war on the weekend".

He said parents who want to put their kids' soccer teams in an SUV or a tradie who needed a ute would have their choices taken away from them.

Chinese manufacturer Great Wall unveiled a dual cab electric ute model in Shanghai last week, while other major manufacturers have committed to having electric versions of their cars within a few years.

A Senate committee heard on Monday Australia was behind other countries in taking up electric vehicles, which the Clean Energy Finance Corporation sees as important to reducing emissions across the transportation sector.

A report from electric vehicle consultants Evenergi says electricity costs could go down and the power grid may become more stable if there's a mass uptake of electric cars, as long as they're charged in non-peak times.

"By encouraging [electric vehicle] charging at times when there is surplus energy and limiting the amount of charging during times of peak demand we can potentially create a more efficient, balanced, and flexible grid," Evenergi chief executive Daniel Hilson said in a statement.