Aged care worker Koryom Nyuonhe survived a childhood of violence and heartbreak to come to Australia. Now flourishing in his local community, he's hoping to inspire the next generation of migrants.

Every year or so, Koryom Nyuon - or ‘Tut’, as he’s affectionately known - tries to visit the land of his birth.

He still has family in South Sudan.

But, it’s not a straightforward journey.

“I go to Ethiopia first, and then spend one week walking by foot,” the 37-year-old tells SBS News.

“Because in South Sudan we have a war between Dinka and Nuer … the marks on my face [from a Nuer initiation tradition] they know I am Nuer, and then they kill me, they don’t care if I came from Australia.”

They know I am Nuer, and then they kill me, they don’t care if I came from Australia. Tut left Sudan when he was just a child, becoming one of countless refugees in neighbouring Ethiopia after fleeing a child soldier training camp.

An ethnic Nuer, he lived off the land with his family, their lives centred around the community church where his father was a priest.

But that’s all a distant memory now. 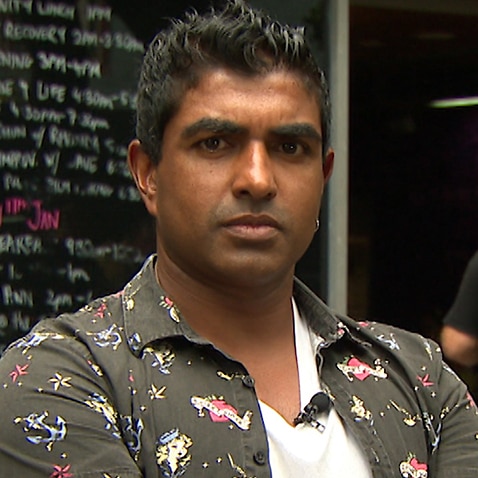 My Australia: The pastor who opened his home to former criminals and drug addicts

Tut says growing up in Sudan made it difficult to study. Soldiers plucked children from schools as soon as they turned 15 and tried to arm them with weapons instead of an education.

“They come to school, they collect us, and take us to train us, to go to fight against our people. If you refuse, then they will kill you. So they collected us, and then we go.” Tut tries to return to South Sudan when he can.
Facebook

Torn away from their families and forced to train as child soldiers, the students were terrorised and robbed of their innocence.

Before he received weapons training, Tut fled across the Ethiopian border – but his captors sought out his father.

Tut would never see him again.

“They came to the church where my father was, they asked him where I am. At that time, my father didn’t tell them anything. Then they tortured him and they killed him.”

They they asked my father where I am ... [he] didn’t tell them anything ... they tortured him and they killed him.

Tut asked his remaining family members to cross into Ethiopia, where they spent seven years in the Sherkole refugee camp.

His cousin was the first to arrive in Australia and, in 2003, Tut, his wife - who he had met in the camp - and three brothers followed him.

The couple went on to have two children, Kim, 10, and Paul, six, and in 2012, Tut completed his certificate III in Aged Care. 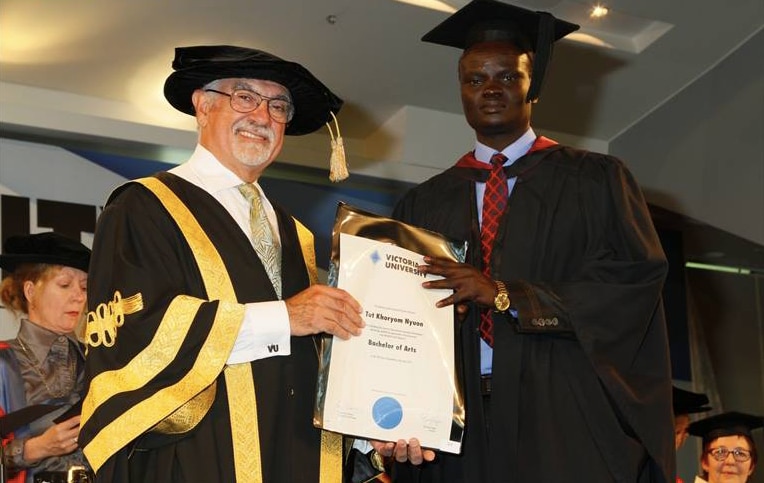 During a placement at the Templestowe Fronditha Aged Care facility in suburban Melbourne, Tut found he was an instant hit with the residents.

He started working there part-time, before quickly becoming a permanent fixture on the roster.

Formerly known as the Australian Greek Society for Care Elderly, most of its residents speak little English. 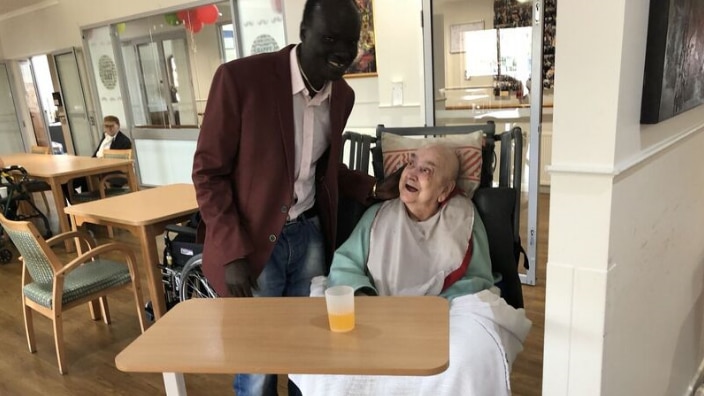 Tut came to Melbourne for a better life.
Supplied/Fronditha

Tut already speaks several languages, including Arabic and his native Nuer language, so it’s perhaps no surprise he quickly picked up a few Greek words to help him make conversation.

“Yiasou” [hello] he greets each resident with. Tut with one of the aged care residents.
SBS News

Christos Lambropolous, whose wife Panagiota has been a resident at the home for eight years, said he was proud Tut is learning Greek.

“He's a very good boy. He's looking after everyone, not just my wife,” he said.

“Anyone need help, they say 'Tut', straight away he comes.” 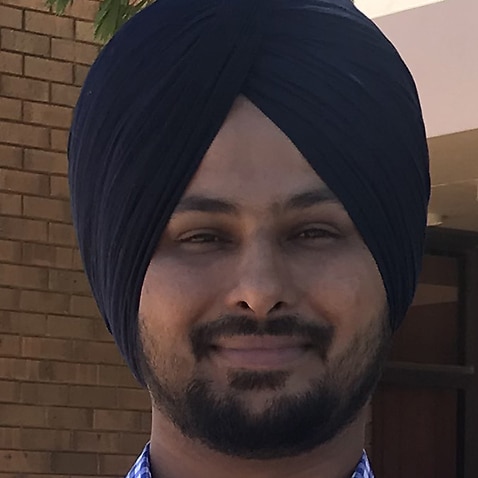 Tut says it’s important to immerse yourself in new communities.

“Now, I’m involved in the Greek community. I’m a like a Greek now. When I go to the shops, somewhere … they say hello to me.”

Now, I’m involved in the Greek community. I’m a like a Greek now.

Visiting families were so impressed with Tut’s care for their loved ones they recently nominated him for the home's outstanding contribution award; Fronditha’a highest accolade among its 400-strong staff.

He won, and it was recognition Tut was honoured to receive.

“I do my best, looking after the residents, because I feel in my heart, this is my family. I do whatever [I can] do in my power.” 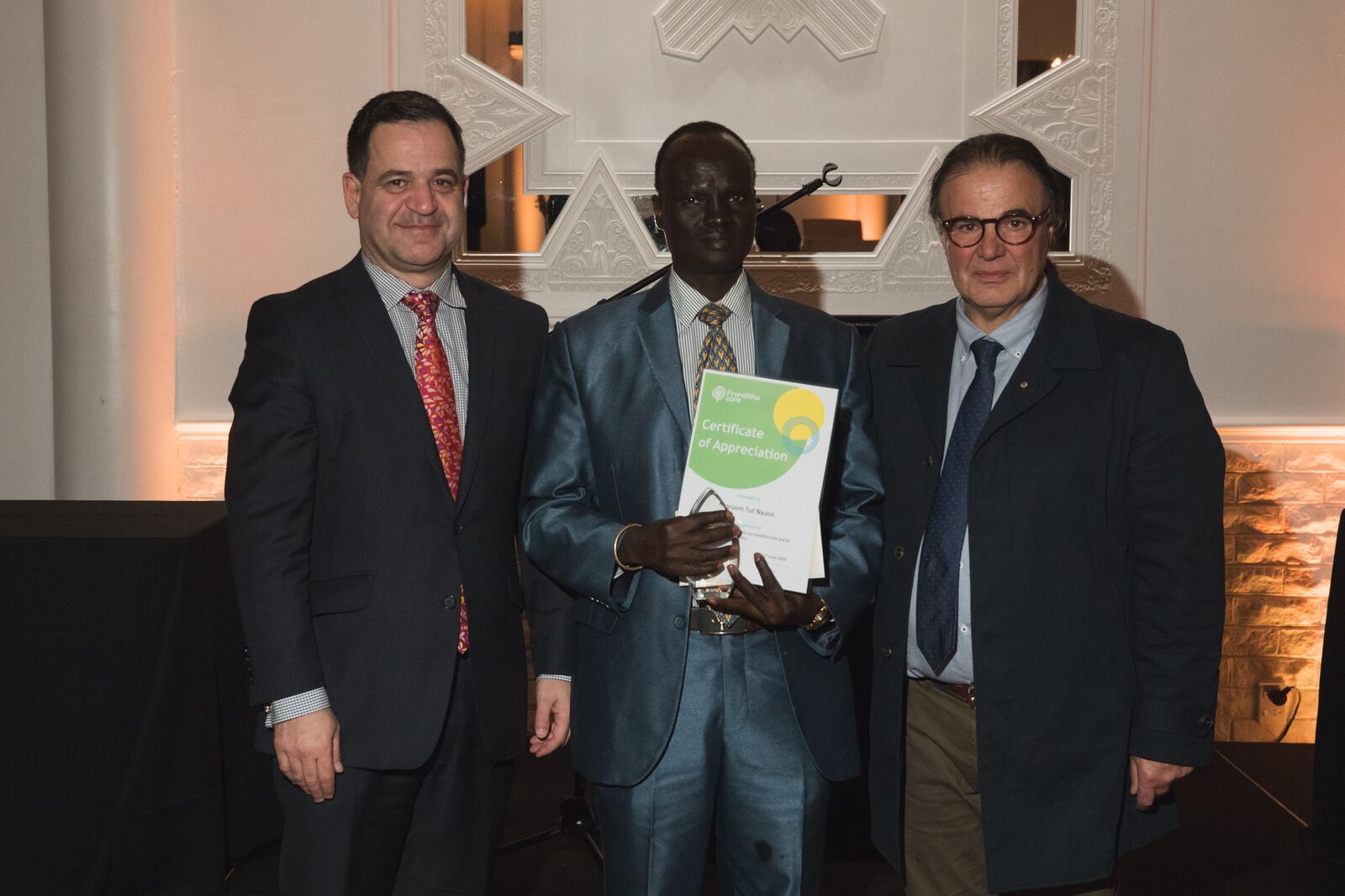 Fronditha residential manager Angela Cox said: “Tut is a gentle, lovely person, who seems to glow from within. He just has a manner that puts people at ease.”

“To know that he’s come from such hardship and that he’s worked through so much, and been a help to so many other people, I really admire him, and it makes me proud to know him and proud that we employ him here at Fronditha.” 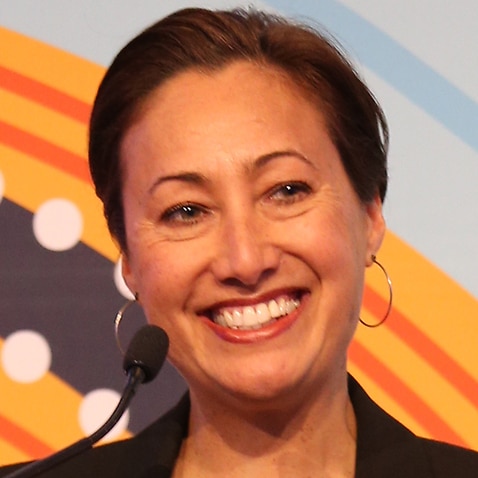 My Australia: The woman tackling workplace ignorance about Indigenous Australians

Tut is also involved in his local South Sudanese community. They meet regularly to help new arrivals settle in and assist young people in find work.

Tut hopes to keep giving back to the local area and is encouraging other refugees to consider a career in aged care.

“It’s engaging. Everything here engages me, to be happy here. All the time I want to come here, to talk to the residents and to my colleagues.”

“This is a freedom country. Here, I’m working, I pay the tax, I vote when the election comes. These are the good things being here in Australia, I feel like an Australian.”