Amani Haydar was five months pregnant when her mother Salwa was killed by her father. In response, the lawyer-turned-artist has become an advocate for change in the legal process for domestic violence survivors and wants to remove the stigma around seeking support.

Cradling a palette of acrylic paint in her hand, she gently adds the finishing touches to a picture of a vase brimming with native flowers.

Next to the blooms sit a pile of books. With thoughtful brushstrokes, the 31-year-old carves a title into each spine.

When she pulls away, the books contain a common thread. They form a library of works about overcoming domestic violence and trauma. Amani Haydar with some of her artwork.
SBS News

“I'd painted on and off while I was working as a lawyer,” Amani tells SBS News.

“I started getting back into my art-making and that opened up a lot of opportunities for me because I didn't always feel safe expressing with words what I was going through or what I was feeling.

“It allowed me to share those complex and vulnerable feelings on my own terms [and] ended up being probably the most healing activity that I took on in order to move forward with my grief and my trauma.” Almost five years ago, in March 2015, Amani’s mother, Salwa, was killed by her father, Haydar, in her Southern Sydney home.

She was stabbed 30 times in a frenzied and sustained attack and died at the scene. She was 45.

Amani is the eldest of four siblings, and at the time, was a litigation lawyer preparing for a new, exciting chapter; she was pregnant with her first child.

"I remember when I gave birth, my husband was carrying my daughter around while she was crying and the midwife sat down and asked me, ‘where's your mum?’”

“I explained that she had been murdered by my dad five months prior.

“There wasn't really anything that she could say to provide any comfort in that moment, but I did then say, ‘you know, I'm really proud to have a daughter. I'm from a family of strong women.’”

It was this exchange that Amani would later read before the court in her victim’s impact statement.

The statement allowed her to have a voice, but she'd found the court process difficult.

“Giving evidence as a witness is difficult … I was working in litigation at the time of the murder, so [the courtroom] wasn't a totally unfamiliar environment.

“But it was very disempowering and silencing to have my mum's narrative go through the filter of what a courtroom requires.”

It took two years for the case to go to trial. Amani's father pleaded not guilty but was convicted of murder in 2017, as well as wounding his youngest daughter who tried to intervene in the attack.

He was sentenced to a minimum of 18 years.

Amani's mother moved to Australia from Lebanon. She was 13 years younger than her husband.

“She had grown up in a context of war and occupation,” Amani said.

“When she got married and decided to migrate, she saw that as an opportunity, as something that would open a lot of doors for her.

“[It would allow] her to explore the world and potentially have a career down the track, and also to have a family in a safer environment.”

But her mother's ambitions quickly changed once the couple reached Australia. Amani as a baby with her mother, Salwa.
Supplied

“When she arrived, she was quite disappointed in her relationship and the fact that it became apparent that it was going to be an emotionally abusive relationship,” Amani says.

Amani says her mother grappled with the abuse for most of her marriage.

“I think for my mum, it was hard to compare her relationship to other people's relationships because there's a stigma about speaking out about what was going on at home.

“People have a sense of shame about sharing their stories and it then becomes harder to say, ‘does your husband do the same thing? Do you feel the same way?'

“And that limits women's opportunities to really gauge what's going on in other households and what a relationship should be like when it's healthy.”

Amani says her mother always wanted to help others. She was a drug and alcohol counsellor at St Vincent’s Hospital in Sydney.

"My mum was very intelligent, very resilient and a really hard worker.

“I think that was really informing her decisions … she was exercising her agency and planning to leave this relationship and taking real steps to establish herself as an independent woman and to move on from that environment.”

But it was too late. 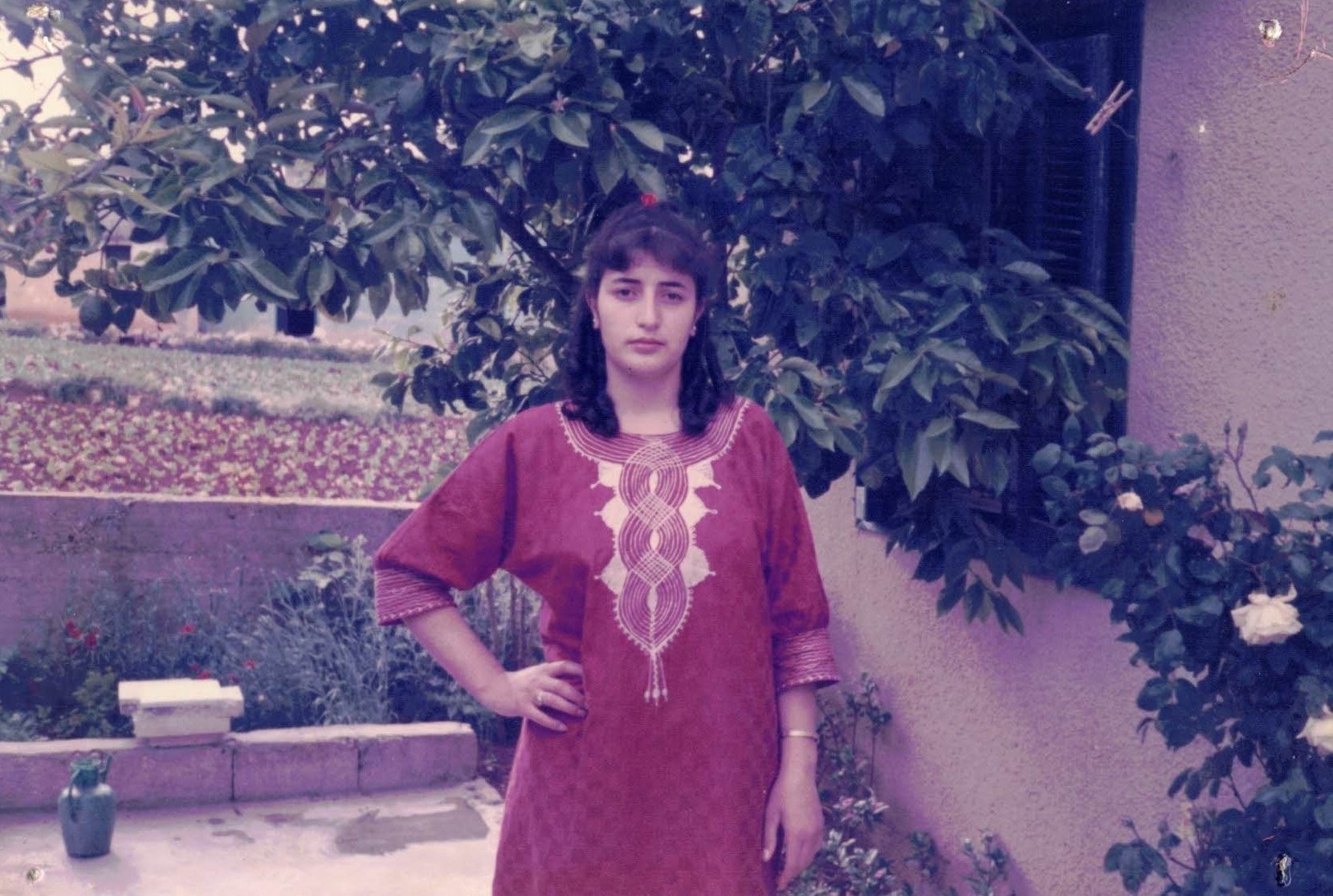 Amani's mother Salwa Haydar in 1987 before she moved to Australia.
Supplied.

Amani's mother also lost her own mother in 2006.

“My grandmother was killed as part of a civilian convoy that was fleeing her village.

“They were targeted by an Israeli drone while they were fleeing, they were in marked vehicles and had white sheets over them so they could have been readily identified as civilians.”

Amani was 18 at the time and says the wave of intergenerational trauma sweep through to her mother and then to her.

“The incident made international news and it was actually investigated by Human Rights Watch as a potential war crime, but nothing really came of that afterwards.”

In the months following her mother’s death, Amani busied herself in Sadaqah, a form of Islamic charity.

“When you give a Sadaqah Ja’riyah, it is one that is continuous … a flowing stream where you're continuously giving back,” she says.

She organised a Pink Ribbon fundraiser raising $5,000 in just a few weeks.

“I think it's important to me to give some of my time and I do a lot of that on my mum's behalf as well because I don't want her memory to fade.

“And one of the ways that I can do that is by being an active and involved person and contributing to the causes that I think are valuable and which will help other women.”

Amani now serves as a volunteer board member of Bankstown Women’s Health Centre, working on policies and procedures, as well as attending events as a keynote speaker. Amani at a recent exhibition with a new self-portrait.
SBS News, Jennifer Scherer

The centre is a safe space for women and provides free or discounted health and wellbeing services including casework and counselling.

Amani says women from minority backgrounds need to be given extra support.

“A lot of women have mixed feelings about that decision-making process and the idea is to empower them to make the decisions that are going to get them into a place of safety.

CEO of Bankstown Women’s Health Centre, Mariam Mourad says 70 per cent of clients who present at the centre are from a culturally and linguistically diverse background with 65 per cent speaking either Arabic or Vietnamese. The majority of them experience domestic or family violence.

“When Amani tells her story ... women come to her and say, ‘I’ve been going through this and I feel alone. But now that you've told your story, I think this [domestic violence] is happening to me'," Mariam says.

“It gives women the platform to come forward and talk about their experiences.

“People get inspired by her resilience because to retell your story over and over again, that will take a toll on you, but Amani is prepared to do that to improve other women's lives.”

Amani also brings her legal experience to the role.

“The legal system is quite complicated and it's really hard to navigate, so having someone with that knowledge to know what to do and what your rights are is really important," Mariam says.

And her efforts to address domestic violence has earned her a finalist position in the 2020 NSW Premier's Woman of the Year Awards, with the winner announced in February.

Throughout her father’s trial, Amani saw elements of the legal process she would like to see changed.

“A lot of abusers can mask their abusive behaviour because they carry themselves in public really well … so they seem more credible, and they use that status and that power to discredit the victim’s complaints.

“I’ve thought about the way that character evidence played out during my dad's sentencing procedure and I've noticed in other cases as well.

“There's limited value to going back through how well-educated someone was or how good they were at cricket when they've committed a murder and someone's dead and they can't get their lives back.”

Amani says mental health care also needs to be more accessible for those who have experienced domestic violence, both directly and indirectly.

“You get a limited number of sessions through victim services and there seems to be an assumption that you should be fine once you're done," she says.

“People struggle to find a counsellor that they relate to, and that process of calling someone up, making an appointment and then it not working out is in itself quite draining.

“That could be something that we change so that people are able to be proactive about their mental health and engage in that healing journey sooner rather than later.” Searching for a way to cope with the loss of her mother, Amani rediscovered her love for art.

It was a form of solace for her as a child but it became a blank canvas to unravel her pain.

“I became quite committed to the idea of creating a sense of healing and also creating a safe space for those stories to happen and for women to discuss what they'd been through.

“And I think doing that through art and writing has been really positive for me.”

In 2018, Amani was a finalist in the Archibald Prize for her self-portrait, titled ‘Insert Headline Here’. “I painted that portrait in the ten days before the submissions were due. It was kind of about coming to terms with the idea that I wanted to actually have this conversation and it was a way of doing that safely.

“My self-portrait … was really about reclaiming the narrative from the media, from the courtroom, from all of the people out there who were engaging in any kind of gossip and watching my life online.”

“It was my way of also honouring my mum's memory and my grandmother's memory because I don't see them as victims, I see them as very strong women.”