The Myanmar government has denied carrying out killings in a village where five mass graves containing Rohingya Muslims were reportedly found.

Myanmar's government has denied an Associated Press report documenting at least five mass graves containing Rohingya Muslim civilians who were killed by the military with help from Buddhist neighbours.

Instead the government says the graves contain "terrorists" that were killed and carefully buried.

The Associated Press on Thursday said the graves in the village of Gu Dar Pyin were confirmed through multiple interviews with survivors who had fled to neighbouring Bangladesh, time-stamped mobile phone videos and satellite imagery showing destruction in the village. 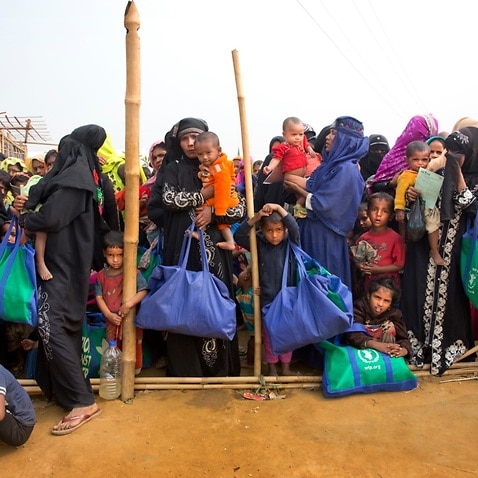 On Friday the Myanmar government issued a statement saying 17 government officials had visited Gu Dar Pyin to investigate the news report and were told by villagers and community leaders that "no such things happened".

It said 19 "terrorists" died and their bodies were "carefully buried" by the security forces.

In regard to Gu Dar Pyin village, "the preliminary result of the examination has proven that AP's report is wrong," it said.

"The AP stands by our reporting," spokeswoman Lauren Easton said..

More than 680,000 Rohingya have fled Myanmar's northwestern Rakhine state to Bangladesh to escape a crackdown by Myanmar's military that began following attacks by a Rohingya militant group on August 25. The United Nations and the United States have described the crackdown as "ethnic cleansing." The UN human rights chief has also suggested that it may be genocide.

Many Rohingya refugees have accused Myanmar troops of a rampage of murder, rape and arson to drive them out of their homes and the country.

The government has blocked international media from travelling to Rakhine state to investigate reports, and has not heeded calls by the UN, US and others for an independent investigation.