Medical experts say government funding is urgently needed to address the spread of a flesh-eating ulcer.

A mysterious flesh-eating bug is spreading at unprecedented levels in Victoria, and experts don't know how to stop it.

Researchers are appealing for government funding so they can figure out how to contain the bacteria, which causes a disease called Buruli ulcer.

Most commonly found in tropical Africa and usually associated with stagnant water, it can have devastating impacts on sufferers, including long-term disability and deformity.

Cases have been reported in the Daintree and, less commonly, the Northern Territory, NSW and Western Australia.

Gus Charles still has the scar from a Buruli ulcer which formed after he cut his knee over a year ago.

"A few weeks before the surgeon cut it open, it collapsed and sort of a small divot came through and blood came out and after the surgery that's when I realised it was something pretty serious," Gus said. His mother Sally said the ordeal - which included a misdiagnosis and intensive treatment - has been draining.

"It's just awful knowing your child is in pain and knowing it's not getting fixed, in fact it's getting worse," she said. 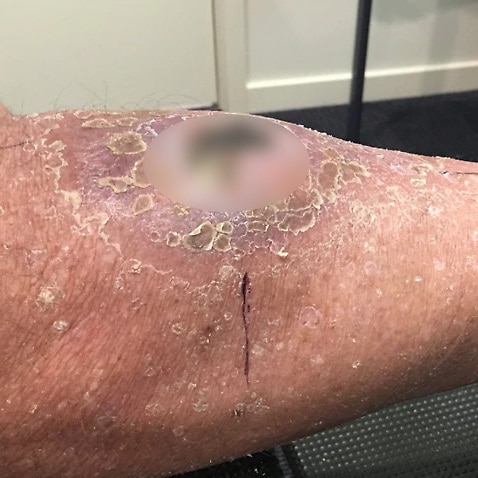 Buruli ulcer epidemic: What is it and how can I avoid it?

Dr Daniel O'Brien of Barwon Health specialises in the research and treatment of the condition.

"It's a flesh-eating infection and it starts to eat away at the skin and the tissue underneath ... In some circumstances where it's very aggressive it can very rapidly take over a whole arm or a part of a leg."

"This is a rapidly worsening epidemic ... We have critical information that we don't know and the funding is urgent," he said.

Over the past few years, the overwhelming majority of diagnoses have been in Victoria - primarily on the Bellarine and Mornington Peninsulas.

There were 107 cases recorded in 2015, 182 in 2016 and last year 275 people presented with the condition. Over the same period, it's estimated that there were just 10 cases diagnosed elsewhere in Australia.

Professor Paul Johnson of Austin Health said it's possible the bacteria exists in possum faeces and is spread to humans through mosquito bites.

"There are big questions we don't know the answers to - particularly why it spreads, why it arrives in a possum population in the first place and where it's going to turn up next."

The federal government has so far provided $2.4 million and the chief medical officer will work with Victorian authorities on new research strategies, a spokesman for Health Minister Greg Hunt said. Victoria has provided close to $1 million over the past decade, with $150,000 going toward current work, including an analysis of possum faeces and testing of mosquitoes, which have been shown to contain the bacteria.

The state's health department and researchers have also applied for a grant from the National Health and Medical Research Council and will contribute $250,000 if it is successful.

The infection seems to happen more in warmer months and bites or trauma to the skin may play a role.

It can take anywhere from four to six months after exposure for a person to display symptoms, which may start as a red, raised area.

The ulcer can be treated with antibiotics, but patients end up paying about $14,000 each, because the drugs are not covered by the Pharmaceutical Benefits Scheme and many sufferers also require plastic surgery.