The vaccine rollout is set to be brought forward for people over 50 from 3 May, as the Australian government attempts to reset its vaccination program.

National Cabinet has agreed to fast-track the vaccine rollout for people over 50 as it works to reset the nation's vaccination program.

Prime Minister Scott Morrison on Thursday announced the "recalibrated" rollout would be expanded to include people over 50 from 3 May in GP respiratory clinics, and GP clinics generally from 17 May.

National Cabinet has also backed tougher protocols for Australians returning from countries considered to be high-risk COVID locations, including India, which is grappling with a surging outbreak of cases. The changes to the rollout plan will see AstraZeneca supplies diverted to the new demographic, leaving open the Pfizer vaccine to be used by Australians under 50.

It comes after new evidence linking the AstraZeneca vaccine to blood clots caused mass disruption to the vaccination program.

The Australian Technical Advisory Group on Immunisation now recommends Pfizer as the preferred vaccine for people under 50.

The revised rollout plan is an attempt by the federal government to reset the program amid logistical issues over the sourcing and supply of coronavirus vaccines.

States and territories have pressured the federal government to make changes to accelerate the vaccine rollout, including adopting plans to introduce mass vaccination sites. 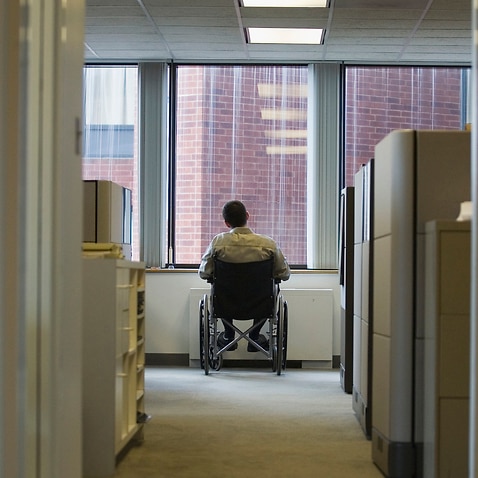 The nation's rollout to this point has been focused on Phases 1a and 1b, which include adults over 70 years of age, and other Australians considered to be vulnerable or critical frontline workers.

Health Department Secretary Brendan Murphy said this cohort remained the rollout first priority, despite the changes to the plan.

"We must continue our course to protect the most vulnerable to severe COVID as soon as possible," he told reporters.

"Our goal to protect them by the middle of the year is unchanged."

The vaccination program topped 1.8 million people on Thursday, but concerns have persisted over the pace of the rollout failing to deliver coronavirus jabs to at-risk groups quickly enough.

An inquiry heard this week only 6.5 per cent of disability care facility residents have received their jab.

NSW Premier Gladys Berejiklian earlier said the state would be open to stepping up to support the vaccination of aged care workers.

"We're keen to support the federal government expediting vaccinating those workers and we'll be having those conversations," she told reporters.

"Of course, it also depends on the doses that we have available to us," she told reporters.

Victoria has also announced plans to open three mass vaccination hubs focusing on those Australians who have been prioritised for the shots.

Tighter restrictions on travel from India

Travel to and from India is also set to face tougher restrictions after National Cabinet agreed to new protocols for Australians returning from high-risk COVID countries.

"As time goes on, and the pandemic continues to rage, there are countries that are frankly of greater risk than others," Mr Morrison told reporters.

"And we've seen, in particular most recently, an increase in the rate of cases in our quarantine system at a state and territory level for arrivals from India."

Mr Morrison said India had been declared a high-risk COVID location, after it reported more than 300,000 coronavirus cases in the past 24 hours.

National Cabinet have agreed to reduce the number of flights from India from later this week as a precautionary response.

Mr Morrison rejected the assertion the decision amounted to abandoning Australians, who may be in the country.

He also denied it reflected a lack of confidence in Australia's quarantine program.

"It doesn't reflect that at all. It reflects that we're in the middle of a global pandemic that is raging," he told reporters.

"Australia has been successful throughout this pandemic, working together with the states and territories, to have very effective border arrangements." West Australian Premier Mark McGowan had earlier called for Australia to consider a temporary ban on all travellers from India.

Other countries could also be included in the restrictions, once Australia drafts its high-risk nation list which will be similar to that in use in the UK.

National Cabinet has also agreed to reduce by 30 per cent the numbers coming through from high-risk countries on chartered flights into Australia.