The Nationals have given Prime Minister Scott Morrison the green light to take a net zero by 2050 target to the UN climate conference in Glasgow. 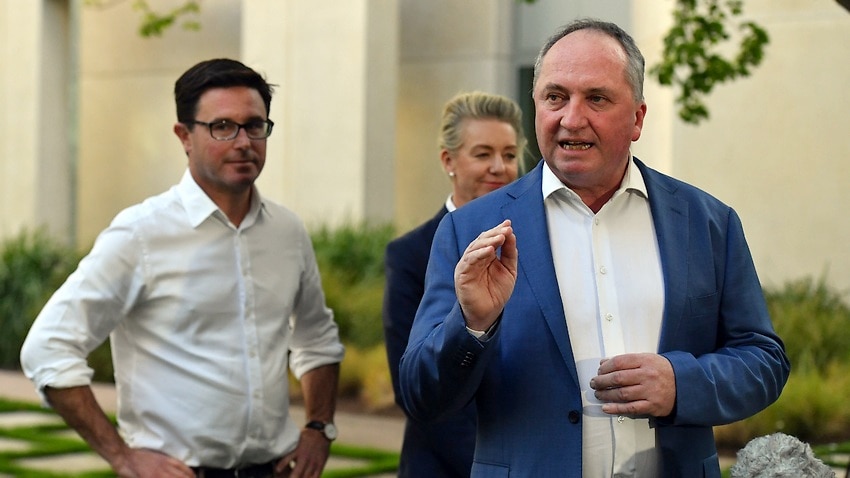 Nationals leader Barnaby Joyce says his party supports a "process" to get to net zero emissions by 2050. Source: AAP

Prime Minister Scott Morrison will take a net zero by 2050 target to the Glasgow climate talks.

Nationals leader Barnaby Joyce told reporters on Sunday his party supported a "process" to get to net zero emissions by 2050.

Mr Joyce said he expected there to be a "firm commitment" to regional Australia in a submission which would go to cabinet this week, before Mr Morrison heads overseas on Thursday.

Read More
Here in the Pacific, the climate crisis has already arrived

"The position regional people are in now is better than the terms and the process that was initially delivered to us," he said after a partyroom meeting in Canberra which lasted just over two hours.

"We are in support of a process going forward that would go towards a 2050 emissions target.

"Obviously that depends upon what we see in the cabinet submission reflecting the conversations and agreements between myself and the prime minister."

Apart from a "socio-economic safety valve" which would include regular reviews of the impacts of the emissions target on jobs and industries in rural and regional areas, a key factor in getting the Nationals over the line was the prospect of an election loss without a net zero target.

"Standing up for them (regional Australians) is making sure that you are in the (cabinet) room where the decisions are being made," the deputy prime minister said.

"Heroics that have no outcome, heroics that leave nothing but a rhetorical flourish - but leave the person who is hurting in the same position as what they were - is not an outcome the Nationals party room supported."

He declined to say whether the prime minister had agreed during the negotiations to give the Nationals an extra cabinet position.

No deal with the Nationals could have been a major embarrassment for the prime minister heading to Glasgow and to the polls by May, with climate shaping up as a major issue for voters.

Mr Joyce acknowledged many Nationals supporters held a different position and continued to have concerns about the target.

"But for all those people in regional Australia ... we will be going into bat for them as we always do."

Nationals deputy leader David Littleproud said it was important that Australia faced up to its international commitments but also made sure there were safeguards.

"The technology roadmap that (Energy Minister) Angus Taylor has put together gives us comfort around where that can take us and particularly around protecting existing jobs and how that technology can grow regional jobs," he said.

Nationals Senate leader Bridget McKenzie said climate policy had been a "totemic issue" for the party over many years and she was glad the party room had "respectfully come to a decision".

Mr Joyce declined to go into detail about the cabinet submission.

Mr Morrison welcomed the support from the Nationals.

“I welcome the Nationals in-principle support for the commitment to reach net zero emissions by 2050, and look forward to this matter now being finally considered and determined by Cabinet," he said in a statement.

Opposition Leader Anthony Albanese said it was extraordinary Mr Morrison was not in the room where decisions were being made about Australia's economic and environmental future.

"This is a government that is frozen in time while the world warms around. This is not really a government, more like a rabble," he told reporters in Canberra.

"They quite rightly have their own party room. They can debate these issues."

Earlier, NSW Treasurer Matt Kean said Nationals ministers would need to resign if they did not support the prime minister.

Mr Kean said a global "economic arms race" was under way in terms of the next generation of clean energy jobs, investment and exports.

He the federal government should also upgrade its 2030 emissions target if it was to be taken seriously.

Former prime minister Kevin Rudd said he would also like to see a 2030 target.

"The political charade rolls on as per my post of two hours ago," he said in a statement on Twitter. "All to distract from the real question of what Morrison will commit to in real and additional carbon reductions by 2030, as the Liberals committed to do this year in the Paris agreement of 2015."

Greens leader Adam Bandt said he is not impressed by the time it has taken for the Nationals to reach a consensus position.

"Another day of Nats chest-beating about representing the poorest people in the country while also refusing to lift income support above the poverty line, raise the minimum wage or put free dental and mental health care into Medicare," he said on Twitter.