Entrepreneurial refugees are starting restaurants on Nauru, but few are keen to remain on the 'island prison'.

It's the world's smallest island nation, and most often associated with detention centres for asylum seekers, but now Nauru is developing a booming culinary scene, with entrepreneurial former detainees founding new businesses and restaurants.

Coco Cabana has been dishing up authentic Iranian food for six months now.

The couple behind Café Island have developed a reputation for serving quality food by the airport.

Bondi Beach Restaurant’s highly rated beach-side Lebanese food has been popular with Australians on the island.

As well as establishing their own restaurants, refugees are also working as chefs and caterers, or running food delivery services from home.

Several sources told SBS News that some of the new establishments have been popular among Australian diplomats, immigration officials and other Australians working on the island.

After years of seafood, fast food and Chinese food, Iraqi, Somali, Rohingya, Pakistani, Iranian, Lebanese and Bengali cuisines have been a welcome addition to the island. Many restaurants and cafes on Nauru are rather basic, many are run out of people's homes (TripAdvisor).
TripAdvisor traveller photos

Sources on Nauru told SBS News that with resources and determination, it was possible for refugees to make the best of a bad situation.

But of over a thousand refugees on the island, those who have managed to find work or start businesses are still in the minority - and even successful business-operators said they would jump at the chance for real freedom.

“Sometimes my friends and other people ask why I bother. One day someone could come and knock on the door, and say you have to leave Nauru, but I don’t want to waste any time, even here.”

Before the refugee-run restaurants opened, international options were largely limited to Indian food at Bay Restaurant and a number of Chinese restaurants – for decades there have been several hundred Chinese workers on the island, having come to work on Nauru’s once-prosperous phosphate mines.

Bay Restaurant, one of the island’s more up-market establishments, now employs two refugees, both from Pakistan.

“All I can say is they are good – they’re good,” head chef Amlesh said. “They are hard-working people.”

There are currently more than 1,100 refugees and asylum seekers living in Nauru, alongside 10,000 locals, on an island that's 6km across at its widest point.

The vast majority have been found to be genuine refugees, and two-thirds live in the Nauruan community.

Around 200 tourists visit each year, some telling SBS News it was easy to spot refugees working around the island. There’s a skilled, popular beautician; a lifeguard at the local swimming area; a taxi driver who’ll take you anywhere on the island for under $15.

The Australian Department of Immigration and Border Protection told SBS News that more than 300 refugees are employed in some form or another, in jobs ranging from construction to hairdressing, nursing to accounting.

An Iranian plasterer sells artwork through social media; another former detainee runs a phone repair service out of the processing centre.

But refugee advocates are quick to point out that despite a degree of freedom, life on the island is far from ideal – there have been reports of intimidation, child abuse, self-harm, harassment, rape and sexual assault. An image painted by a former-detainee who sells artwork on the island and online (Twitter: @ArtistAbbas).
Abbas al Aboudi

“Living here is like a prison, but a little bit different,” one asylum seeker told SBS News. “This is prison with water, and no future for children or families.”

Some business owners told SBS News they wouldn’t have been able to open without the support of local Nauruans – but there have also been accounts of disputes, threats and intimidation.

Issues ranged from petty theft to punch-ups with officials, one business owner said.

One Pakistani restaurant only lasted a few months; Persian Gold, run by an Iranian brother and sister, has also shut its doors; Bondi Beach Restaurant served its final round of drinks last week.

More than 30 refugees have established their own businesses, the Department of Immigration said, though it’s less clear how many remain open. Bondi Beach Restaurant was highly rated for it's Lebanese food and was popular with Australians on Nauru (TripAdvisor).
TripAdvisor

“It doesn’t matter if it’s expensive or cheap, it’s finding the food that’s so difficult,” he said.

Competition can be fierce, he says. Fights have broken out in markets over vegetables – and it’s not just food that's limited.

“It’s taken over two months just waiting to find a fitting for the toilet,” he said.

Still, refugee-run restaurants have become some of the most highly rated establishments on the island, where customers can be unforgiving despite limited options and a challenging environment.

“Expensive, crappy but possibly the best hotel in the country,” is how a tourist reviewed one of the island’s only two hotels.

Mojtaba says one of his most unique dishes is Mirza Ghasemi – he barbecues eggplant, peels the skin, adds garlic, onion and egg before frying it and serving to customers.

But grilling eggplant in the middle of the Pacific for hungry Nauruan’s isn’t the life the former construction worker expected when he fled Iran five years ago.

“I don’t care if someone knocks on the door, I’ll leave everything and I’ll go, because I want to go,” he said. 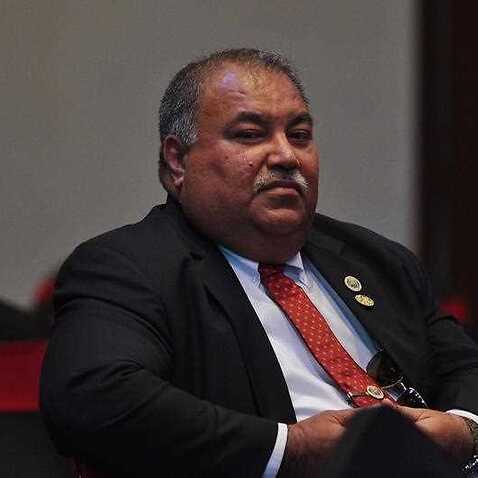 Amnesty warns contractors seeking to ‘profit from despair’ on Nauru