Posters of Tony Abbott with an offensive word written on his forehead are being taken down from a busy Sydney road, as police investigate.

Police have released CCTV footage of two men wanted in relation to a string of offensive posters targeting former PM Tony Abbott in his electorate.

NSW Police Force confirmed they were investigating after several caricatured heads with expletives written across the former prime minister's forehead were found along the busy Spit Road in Mosman and around Manly and surrounding suburbs. Other posters had "Pell" written across them.

About 7am, the posters were discovered pasted onto walls in four locations across Manly Road, and Henrietta Lane, Manly.

The discovery prompted the Warringah MP to declare politics in Australia had reached a "new nastiness". The posters featuring an offensive word on Tony Abbott's face have been removed.
Facebook

Mr Abbott said he had not experienced anything like it before.

"I think this is a new nastiness in Australian politics," he told reporters.

"I'm not for a second suggesting that any of the candidates in Warringah are somehow doing this but it is a fact that there are some pretty nasty people who want change here in Warringah." Tony Abbott says the campaign has reached a new level of nastiness.
Facebook

Police released images on Thursday afternoon, showing two men they'd like to speak with in connection to the incident.

"As investigations continue, police are searching for two men depicted in the images who are described as being Caucasian in appearance, both aged in their late 20s or early 30s," a NSW Police Force spokesperson said.

"One man was wearing a yellow beanie and a white T-shirt with jeans and work boots. He has a tattoo on the inside of his right arm, and a moustache.

"The other man was wearing a black hoodie with a black peak cap and dark blue trackpants. He has a beard and a moustache."

The posters "have been or will be removed".

"This is a new low in political life," she told 2GB radio.

(1/2) My volunteers have signed an extensive code of conduct. They are under strict instructions not to engage in negative behaviour, as I have been the subject of a non-stop smear campaign from Mr Abbott and his supporters and do not condone that type of politics...

Mr Abbott's main rival, independent Zali Steggall, rejected any suggestion that she, her campaign or volunteers had anything to do with the posters.

"My volunteers have signed an extensive code of conduct," she tweeted.

"They are under strict instructions not to engage in negative behaviour, as I have been the subject of a non-stop smear campaign from Mr Abbott and his supporters and do not condone that type of politics." In a phone call with 2GB's Steve Price, the owner of a Seaforth daycare centre said she scraped a poster with the word "Pell" written across a caricature of Mr Abbott's face off the wall herself outside the centre. 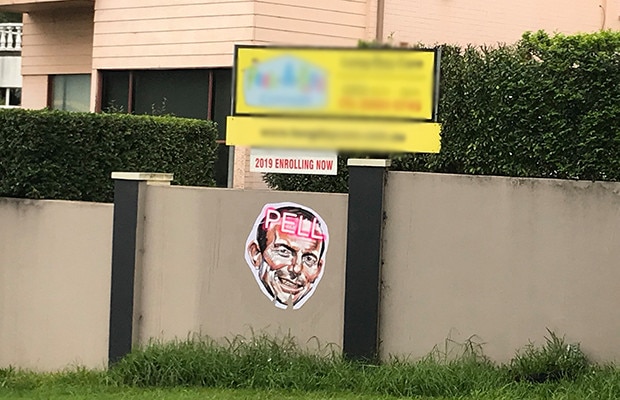 This poster appeared on the fence of a daycare centre in Seaforth.
Facebook

Rita said her staff had received phone calls from members of the public assuming the centre had allowed the poster to be put up.

“It’s disgraceful. I have no words," she said. “I’ve got staff who are in tears after receiving these phone calls. Which is not okay.

“It’s a very dirty campaign but just keep innocent people out of it.”