Sydney's NYE fireworks display will go ahead despite fire danger and an RFS volunteer's death, with Premier Gladys Berejiklian admitting to "mixed feelings".

NSW Premier Gladys Berejiklian has admitted to "mixed feelings" about the New Year's Eve fireworks display in Sydney amid elevated bushfire risk and the death of a volunteer firefighter near the NSW-Victoria border.

The fireworks will ring in 2020 despite the closure of popular vantage points and political and community opposition.

The NSW Rural Fire Service granted the fireworks display - seen by one billion people across the world - a total fire ban exemption on Monday evening.

It's 7.40am and this is the sky surrounding my friend's family home in Bermagui. Ash is falling on the roof and smell of smoke is getting stronger by the second. People are getting evacuated to the beach. This is terrifying. #Bushfire #bushfiresNSW pic.twitter.com/hjCF2HT0ia

A similar exemption for fireworks at Parramatta Park was not granted.

Temperatures around the state are expected to peak on Tuesday, with forecasts of more than 40C across western Sydney and in regional NSW.

Fire danger ratings for Sydney, Newcastle and the state's south - where several emergency-level blazes are burning - range from severe to extreme.

Ms Berejiklian on Tuesday told reporters the death of expectant father Samuel McPaul on the Green Valley fire ground at Jingellic - where a "fire tornado" lifted and flipped his fire truck - would cast a pall over festivities.

Mr McPaul is the third volunteer firefighter to die this bushfire season. "Many of us have mixed feelings about this evening but the important thing we take out of this is that we're resilient as a state," Ms Berejiklian said.

"We're a state that's optimistic about the future and I don't want to take a second away from the deep sense of loss and tragedy many people are feeling.

"You can't think about more difficult circumstances than that.

"But as a state, we always need to think about the future, and given the RFS has said it's safe for the state to proceed or for the City of Sydney Council to proceed with those activities tonight, that's what will happen."

Sydney Lord Mayor Clover Moore paid tribute to the firefighters who lost their lives and said the fires were a wakeup call for governments to start making effective contributions to climate action.

"Yes, Australia is burning. Our national parks and our animals are being decimated and our communities are being devastated. People have lost homes, people have died, firefighters have been killed defending communities, most recently last night and we honour Samuel McPaul," she said.

"We are not meeting our Paris commitment. Our emissions have been going up over the last four years. The response I received was an irrational reply from Angus Taylor, deflecting and trivialising this critical issue for which he has the responsibility to take action. I again call upon the federal government to respond to the climate emergency across our country."

Sydney’s New Years Eve Fireworks should just be canceled, very easy decision. The risk is too high and we must respect our exhausted RFS volunteers. If regional areas have had fireworks banned, then let’s not have two classes of citizens. We’re all in this crisis together.

NSW Deputy Premier John Barilaro had earlier called for Sydney foreshore fireworks to be scrapped and funds redirected to drought and bushfire relief, echoing calls from a petition signed by more than 275,000 people.

"If regional areas have had fireworks banned, then let's not have two classes of citizens. We're all in this crisis together," he said on social media.

A statement to the event's official website said cancelling the event would seriously hurt Sydney businesses and that organisers had already donated $620,000 to bushfire and drought-affected communities.

While the harbour will have fireworks, revellers will be unable to use the forested Balls Head Reserve or Bradleys Head as vantage points due to the fire risk.

The city's famous celebrations are expected to attract one million people to the Harbour foreshore and generate $130 million for the NSW economy.

The RFS has urged residents to shelve any private fireworks plans while police have encouraged revellers to take care in the heat and remain hydrated.

Some 3000 police officers will be on duty around the Harbour foreshore. Meanwhile, more than 400,000 revellers are expected to gather in Melbourne's city centre to enjoy the New Year's Eve fireworks celebrations, which had also been at risk of being called off.

Melbourne's temperature on Tuesday is forecast to drop to a maximum of 21C, which helped give the pyrotechnical show the green light despite calls to cancel them with bushfires ravaging the state.

Victoria had more than 30 fires blaze across the state on Monday, with more than 20 in the East Gippsland region. People have been warned not to use illegal fireworks due to the hot, dry and windy conditions after they sparked 17 fires last year.

Melbourne Lord Mayor Sally Capp said the city's annual fireworks show is safe to hold because of the cool change that came through late on Monday.

"It's about the balance of recognising that there are people that want to come together, that want to actually spend some time with others in celebration after what may have been a very, very tough time for them," Ms Capp said of Melbourne's New Year's Eve celebrations. 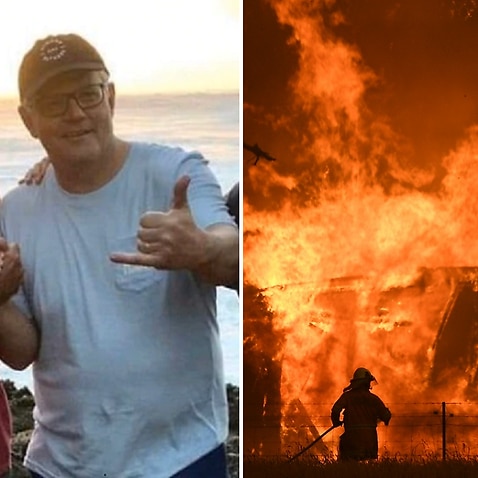 The images that have defined Australia's horror bushfire season

In Adelaide, New Year's Eve fireworks will also go ahead despite calls for the displays to be cancelled in light of the fires still burning across the state.

The Adelaide City Council says while it appreciates the suggestion to cancel the fireworks and reallocate the funding to bushfire relief, the event will go ahead as scheduled.

"With the night now so close, many people would have already planned their trip into the city to watch the fireworks from the park or in one of the many venues adjacent to the riverbank," it said.

It is so smoky here. We’re smack in the middle of back burning and the Green Wattle bushfire.😩 Prayed for rain today. It’s now spitting rain. 🙏🏼 Hope it really rains as tomorrow and NYE a heat wave is in the forecast. Fireworks hasn’t been cancelled yet 😳 pic.twitter.com/r3hTR3L90x

The council said instead of scrapping the fireworks, the thousands of people attending and others around the state were encouraged to donate to the St Vincent de Paul Society's bushfire appeal.

Funds raised by the appeal will help those impacted by recent fires across the state, especially those in the Adelaide Hills where more than 80 homes were destroyed in the lead-up to Christmas.

Canberra is the one capital city that has called off its New Year's Eve fireworks, with experts most concerned about vantage points around Canberra having limited access and evacuation routes.