Of the 27 delegates in the meeting, the United States was the only state that 'could not support' Ms Okonjo-Iweala's candidacy.

Key WTO ambassadors tapped Nigeria's Ngozi Okonjo-Iweala Wednesday as the best pick to lead the organisation on Wednesday, but she was opposed by Washington, who said it supported South Korean Trade Minister Yoo Myung-hee instead.

The so-called troika of ambassadors heading the World Trade Organisation's three main branches determined after four months of consultations with member states that Ms Okonjo-Iweala was the most likely to obtain the consensus needed to take the top job, WTO spokesman Keith Rockwell told reporters.

The initial pool of eight candidates for the WTO's top post had been whittled down to just two over two previous rounds of consultations, with only Ms Okonjo-Iweala and South Korean Trade Minister Yoo Myung-hee still in the race. The global trade body is thus set to be led by a woman for the first time whichever of the two final candidates succeeds in their bid to follow Roberto Azevedo, who stepped down as WTO director-general in August, a year ahead of schedule.

The troika, led by New Zealand's Ambassador David Walker, concluded a third round of consultations on Tuesday.

Its decision marks an important step paving the way for Ms Okonjo-Iweala to become both the first woman and the first African to head the organisation.

But the WTO's 164 member states still need to determine whether they will support her before their next General Council meeting on November 9.

Washington already said it was opposed to her candidacy, casting doubt on whether she can obtain the necessary full backing from member states. 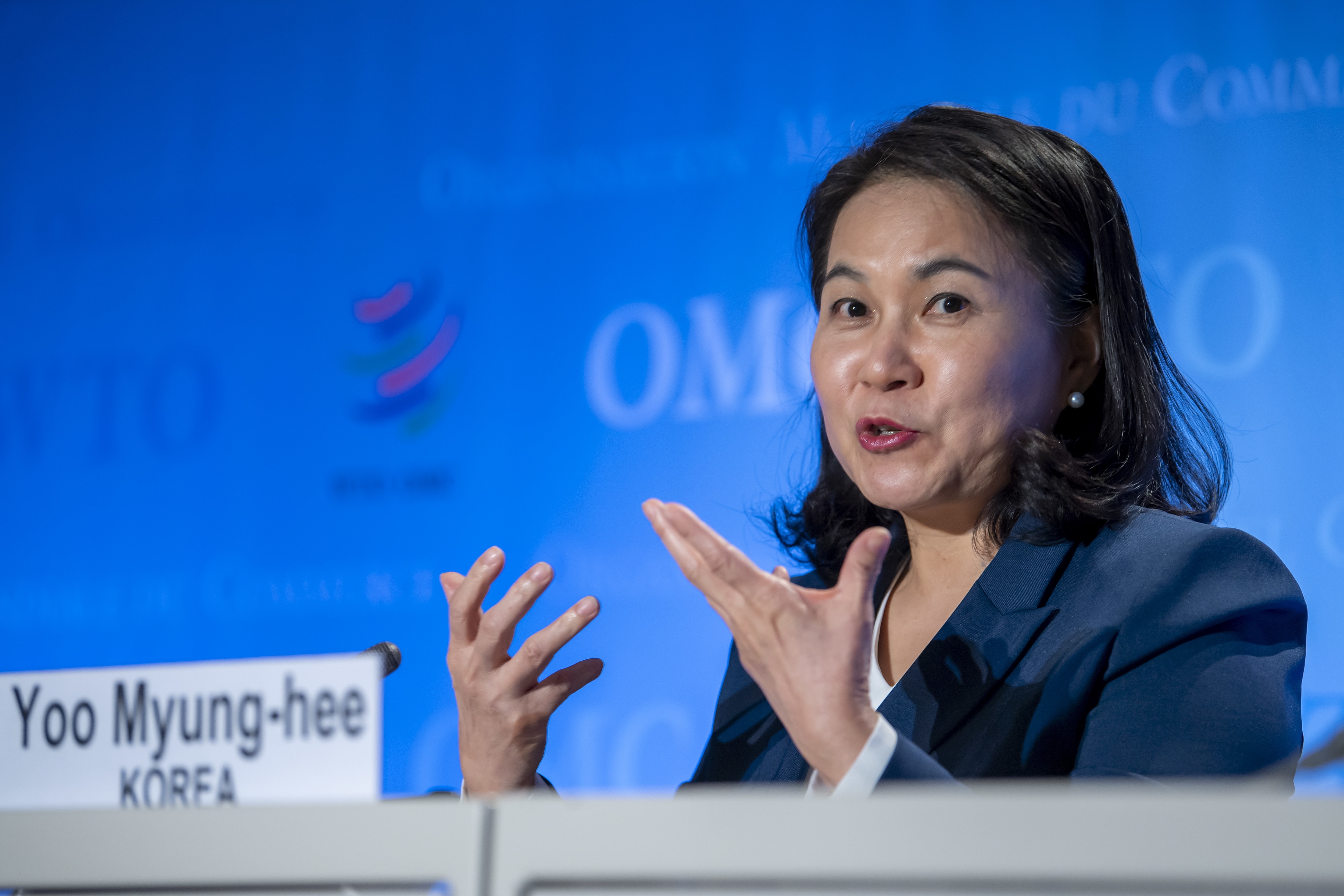 Yoo Myung-hee speaks during the press conferences of candidates for the WTO Director-General selection process.
AAP

In a statement late Wednesday, the US Trade Representative's office expressed support for Ms Yoo, calling her "a bona fide trade expert who has distinguished herself during a 25-year career as a successful trade negotiator and trade policy maker.

"She has all the skills necessary to be an effective leader of the organization," the statement said. "The WTO is badly in need of major reform. It must be led by someone with real, hands-on experience in the field."

Mr Rockwell said that 27 delegations had taken the floor during Wednesday's meeting and only the United States "could not support the candidacy of Dr Ngozi".

Mr Rockwell, meanwhile, stressed that Wednesday's meeting "was never intended to make a final decision" on the next director general since that is up to the General Council.

Ms Okonjo-Iweala, 66, who served as her country's first female finance and foreign minister and has a 25-year career behind her as a development economist at the World Bank, welcomed the troika's support. "Dr Ngozi is immensely humbled to receive the backing of the WTO’s selection committee today," a spokesperson told AFP in an email. "She is honoured by the faith members have placed in her."

Ms Okonjo-Iweala voiced confidence earlier this month that she would be the successful candidate.

"I feel the wind behind my back," she told a virtual press briefing after the 55-member African Union officially supported her.

Ms Okonjo-Iweala, who also serves on Twitter's board of directors, as chair of the GAVI vaccine alliance and as a special envoy for the World Health Organisation's COVID-19 fight, saw her candidacy get another boost this week when the EU threw its weight behind her.

She would certainly have her hands full in the new position.

Even before the COVID-19 crisis hit, the WTO was already grappling with stalled trade talks and struggling to curb tensions between the United States and China.

The global trade body has also faced relentless attacks from Washington, which has crippled the WTO dispute settlement appeal system and threatened to leave the organisation altogether.

Ms Okonjo-Iweala said earlier this month that she had broad experience in championing reform and was the right person to help put the WTO back on track.

"I am a reform candidate and I think the WTO needs the reform credentials and skills now."