The national anthem protest of Queensland schoolgirl Harper Nielsen has been likened to the kneeling protest of NFL star and US social justice campaigner Colin Kaepernick by US media.

The Australian schoolgirl who refused to stand during the singing of the national anthem at assembly out of respect for the Indigenous population is receiving international applause and global media attention.

Harper Nielsen's anthem protest has even been likened to the kneeling protest of NFL star and US social justice campaigner Colin Kaepernick. After receiving nation-wide media coverage, her "brave" yet "controversial" protest is now being reported by numerous news agencies in the UK and the United States, including the BBC and CNN.

The Washington Post wrote that the young girl's anthem protest "is an echo" of Kaepernick's kneeling protest to police brutality.

In 2016, the San Francisco 49ers quarterback sat down during the playing of the national anthem at a game.

When asked why he told the media: “I am not going to stand up to show pride in a flag for a country that oppresses black people and people of colour.” 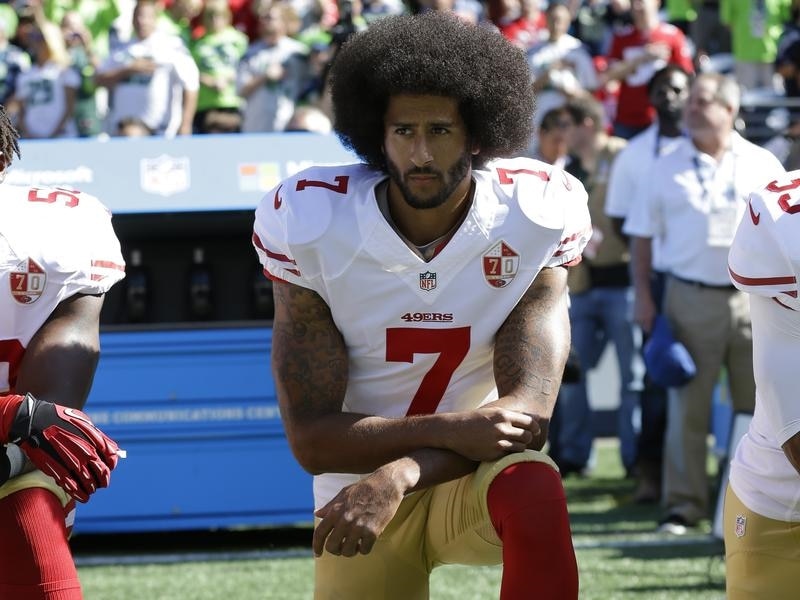 Quarterback Colin Kaepernick took a knee as the US national anthem was played to protest racism.
AP

Harper, who is in Year Four, claimed she was put in detention and threatened with suspension after refusing to stand and sing Australia's anthem at Kenmore South State School in Brisbane, Queensland.

"I'm not just someone who obliges by the rules of older people just because they're older," the nine-year-old said during one of many interviews she gave on Wednesday.

Her parents insisted they had no influence over their daughter's actions, however a number of politicians weren't convinced. "And when it says 'we are young' it means that it ignores the Indigenous Australians who were here before the English for over 50,000 years."

Harper said she had chosen to take a public stand on the issue at her school "because I feel that this is the right thing to do and it will help raise awareness for the issue." The Queensland Department of Education has denied the student was threatened with suspension.

"At no time did the school suggest that the student would be suspended or excluded for refusing to take part in the national anthem," a department spokesperson said in a statement.

"The school has been respectful of the student’s wishes and has provided other alternatives including remaining outside the hall or not singing during the national anthem," the statement said.