'Nobody is safe until everyone is safe': APEC leaders agree to share vaccines equitably

The meeting's major outcome was a commitment to slash tariffs on vaccines and other pandemic-related medical supplies to streamline the international response to the deadly health crisis. 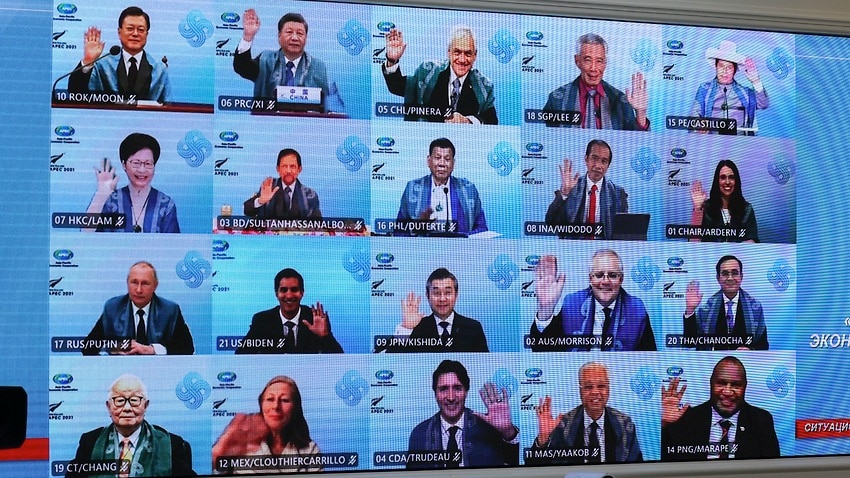 Pacific Rim leaders agreed to cut tariffs on COVID-19 vaccines at a virtual summit Saturday, but failed to deliver meaningful movement on climate change and reacted coolly to US efforts to re-engage with the region.

The annual Asia-Pacific Economic Cooperation (APEC) summit brought together leaders from 21 member economies, including US President Joe Biden and his Chinese counterpart Xi Jinping, in a bid to chart a path to pandemic recovery.

APEC leaders, including Scott Morrison, issued a statement on Saturday pledging commitments which they said would accelerate economic recovery and achieve "sustainable and inclusive growth".

"We recognised the inequities in widespread access to COVID-19 vaccines, and therefore, we continue to strongly support equitable access to safe, effective, quality-assured and affordable COVID-19 vaccines, diagnostics, therapeutics, and other related essential medical products.

"Because nobody is safe until everyone is safe, we are determined to ensure extensive immunisation of our people against COVID-19 as a global public good. It remains a priority that we expand vaccine manufacture and supply."

New Zealand Prime Minister Jacinda Ardern said the group discussed an economic "reset" in the wake of the coronavirus crisis.

"APEC leaders are determined to work together to defeat COVID-19," she said.

"We are focused on driving a coordinated economic response to the biggest downturn in 75 years, creating new models of growth and responding to climate change."

The meeting's major outcome was a commitment to slash tariffs on vaccines and other pandemic-related medical supplies to streamline the international response to the deadly health crisis.

The leaders also agreed to push for a freeze on increases to fossil fuel subsidies as part of a plan to make the pandemic recovery environmentally sustainable.

But the pledge, first raised by APEC in 2010, did little to meet the soaring rhetoric of regional leaders in the build-up to the summit, who had talked up transitional change toward a green future.

Ardern said ahead of the declaration that she would have liked to see fossil fuel subsidies scrapped completely.

"If the world is not ready to take bold action on climate change, then the world must be ready for the disastrous results of climate change," she said in the lead-up to the leaders' meeting.

The summit was held against the backdrop of growing competition between the United States and China, the world's top two economies and the region's preeminent military powers.

With tensions between Washington and Beijing building over Taiwan, human rights and trade, Biden and Xi are set to hold a virtual meeting on Monday, the White House announced.

"Of course, as APEC economies, we would welcome the ongoing dialogue between APEC members," Ardern said when questioned about the talks.

Biden used the APEC meeting to discuss "ways to unleash the economic power of the region and to deepen US economic engagement throughout the Indo-Pacific", the White House said in a statement.

"President Biden reaffirmed our interest in serving as a strong, reliable partner to APEC economies as we pursue sustained and inclusive growth," it said.

China last month made a record number of air incursions near Taiwan, a self-ruling democracy claimed by Beijing, prompting Washington to stress it would help Taiwan defend itself if needed.

On Thursday, Xi warned against a return to Cold War-era divisions in the Asia-Pacific, in remarks to a virtual business conference on the sidelines of the APEC summit.

"Attempts to draw ideological lines or form small circles on geopolitical grounds are bound to fail," he said.

"The Asia-Pacific region cannot and should not relapse into the confrontation and division of the Cold War era."

Biden and Xi have talked by phone twice since the veteran Democrat moved into the White House in January.

Biden had hoped to meet Xi at a recent Group of 20 summit in Rome, but the Chinese leader has not travelled since the start of the COVID-19 pandemic.

The United States has offered to host an APEC summit in 2023 in a bid to reaffirm its commitment to the region after years of protectionist policies under Biden's predecessor Donald Trump.

But the leaders' meeting did not take up the offer, which Ardern said was still up for discussion.

"It's not an issue that is substantively discussed at leader level, as you can imagine, but it is something I have every confidence we'll see resolved very shortly," she said.

Later, White House press secretary Jen Psaki said "one economy" had not joined a consensus for the United States to host the meeting, without specifying which one, adding that Washington hoped the group would "move past this impasse".