A new study claims rivers around the world are becoming clogged with microplastics.

Rivers are fast becoming hotspots for microplastic pollution, according to a new study.

Microplastics are small plastic particles left over from household and industrial products; everything from microbeads in body scrubs and toothpaste, to fibres in synthetic clothing and fishing nets.

They can harm ecosystems and pose a human health risk as they enter the food chain.

A new University of Manchester study said that while microplastic contamination of the world's oceans has attracted much attention, microplastic numbers in the world's rivers "is not (as) well understood". Is your tap water safe? Calls for more research on the dangers of plastic fibres

Microplastics can find their way into river systems from multiple sources including industrial sewage, stormwater drains and domestic wastewater. And results from the study were grim.

It found "microplastic contamination was pervasive on all river channel beds" tested in the UK, even in remote areas. It also found rivers were often more affected by microplastic pollution than other bodies of water.

The River Tame near Manchester was found to have the worst microplastic pollution in the world at 517,000 particles per square metre - worse than built-up coastal areas in South Korea and Hong Kong.

Several other rivers were also listed in the study including in Germany, Canada and China. 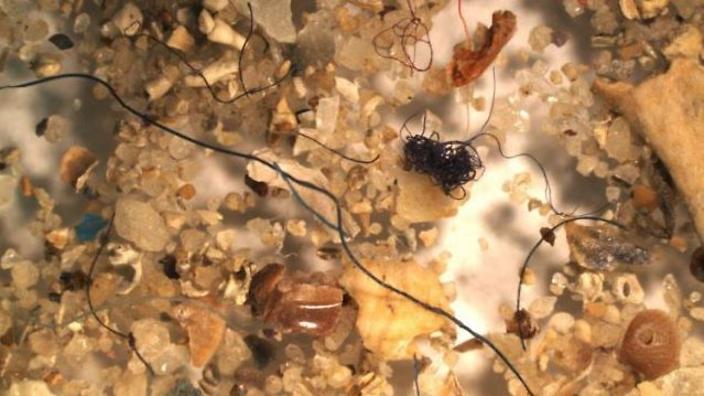 Microplastics (dark fibres pictured) next to grains of sand to show their actual size.

Co-author of the report Professor Jamie Woodward told UK newspaper The Telegraph the presence of microplastics in rivers was a "huge problem".

"We found microplastics everywhere, even in streams high in the hills. Wherever you find people, you find plastic."

Mr Woodward said to tackle the problem in the oceans, microplastics have to be prevented from entering river channels.

Lead researcher Dr Rachel Hurley told the BBC "it is likely that there are even higher concentrations in some of the large rivers passing through global megacities". The scientists involved called for tighter regulations on waste flowing into urban waterways around the world.

An investigation by Orb Media last year found 83 per cent of 159 drinking water samples collected from countries across the world were contaminated with microplastics. According to CHOICE, while the US has banned the use of microbeads from July 2017, Australia is relying upon a voluntary phase-out by industry.

"It was determined that 80 per cent of companies identified as supplying products containing plastic microbeads have already phased out or have committed to phasing out microbeads," a spokesperson from the Department of Environment and Energy told CHOICE.