New Zealanders are in mourning. An overwhelming state of shock has hit the country renowned for being one of the safest nations in the world.

Seventeen minutes of terror has reshaped New Zealand - but more than 24 hours after the Christchurch mosque attacks its citizens are standing together.

At least 49 people are dead, a further 40 are in hospital and 11 in a critical condition, according to NZ authorities. World-wide outpouring of grief and tributes after Christchurch mass shootings

Amid the tragedy and outpouring of grief, New Zealand’s people have come together. 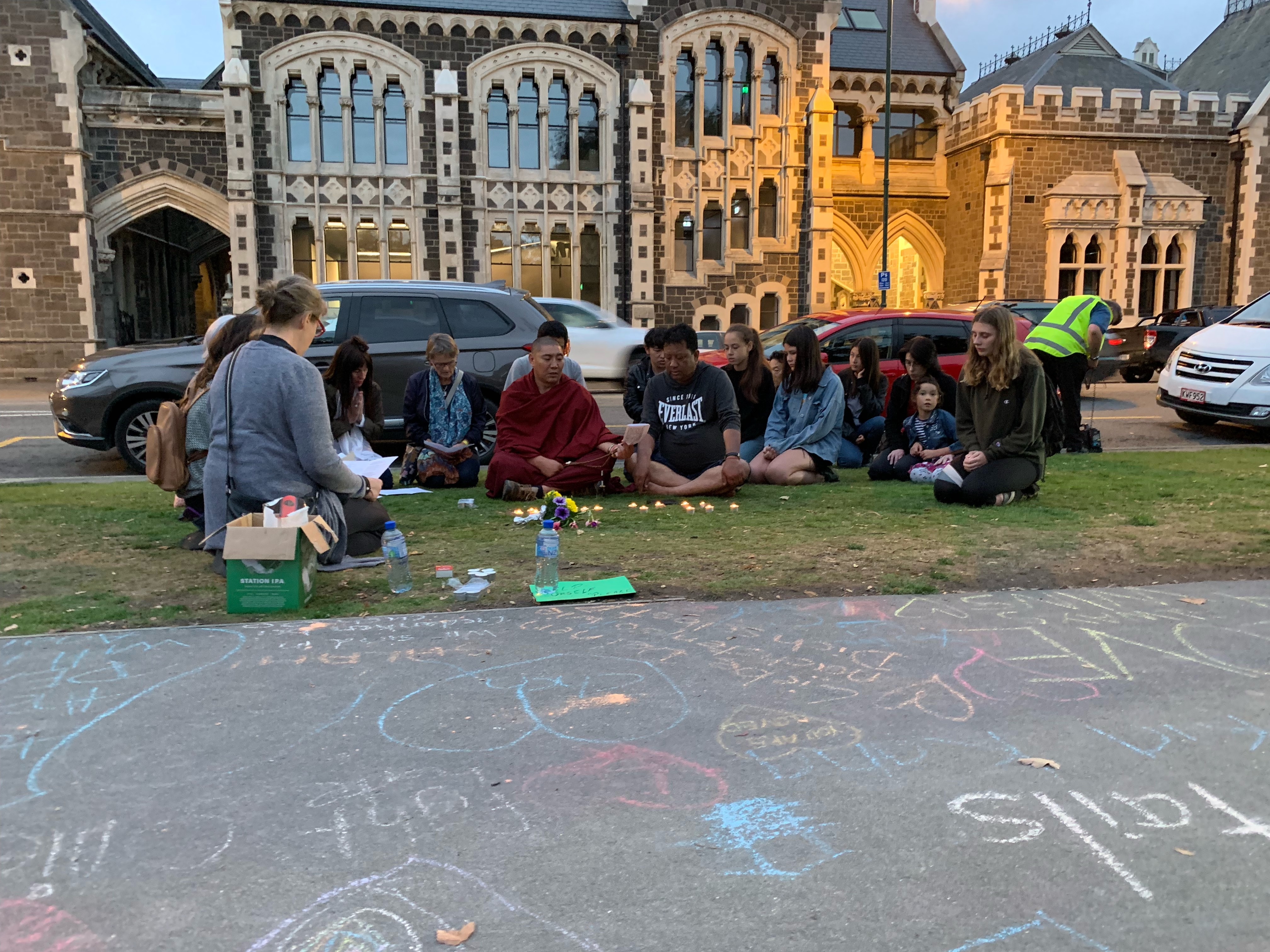 Interfaith prayers near the memorial in Christchurch.
SBS News

A floral tribute has been set up the botanic gardens in Christchuch, near the hospital where the injured are being treated.

In Wellington, a minute’s silence was observed before the NRL game between the NZ Warriors and Canterbury Bulldogs – with the stadium opened free to the public. A man places flowers at a makeshift memorial near the Masjid al Noor mosque in Christchurch, where one of the two mass shootings occurred. (AP)
AP

‘Please pray for me and my daughter’

One of the victims has uploaded a video from his hospital bed, to thank well-wishers and ask them to pray for his five-year-old daughter, who remains in a critical condition.

Wasseim Alsati, believed to have migrated from Jordan in 2014, was reportedly shot four times in the attack, including in his back and stomach.

He uploaded the video to social media, where he is seen lying in a hospital bed with a bandage on his neck. Massacre victim Wasseim Asati posts a video from his hospital bed, asking people to pray for his daughter – who is in a critical condition. (Supplied)
Supplied

“I am very sorry to miss your calls and text messages. I will not be answer any of you right now. I am really tired. Please pray for me and my daughter.,” Mr Asati said in the video.

"I hope that she will be so much better. I am just posting this video to show that I am OK. But it has been a pleasure to know you all, guys. God bless you all."

New Zealand Prime Minister Jacinda Ardern spent Saturday in Christchurch in the aftermath of the shooting.

Speaking at a press conference, she said authorities were still removing bodies from the Deans Avenue mosque and hoped they would all be cleared later in the day. 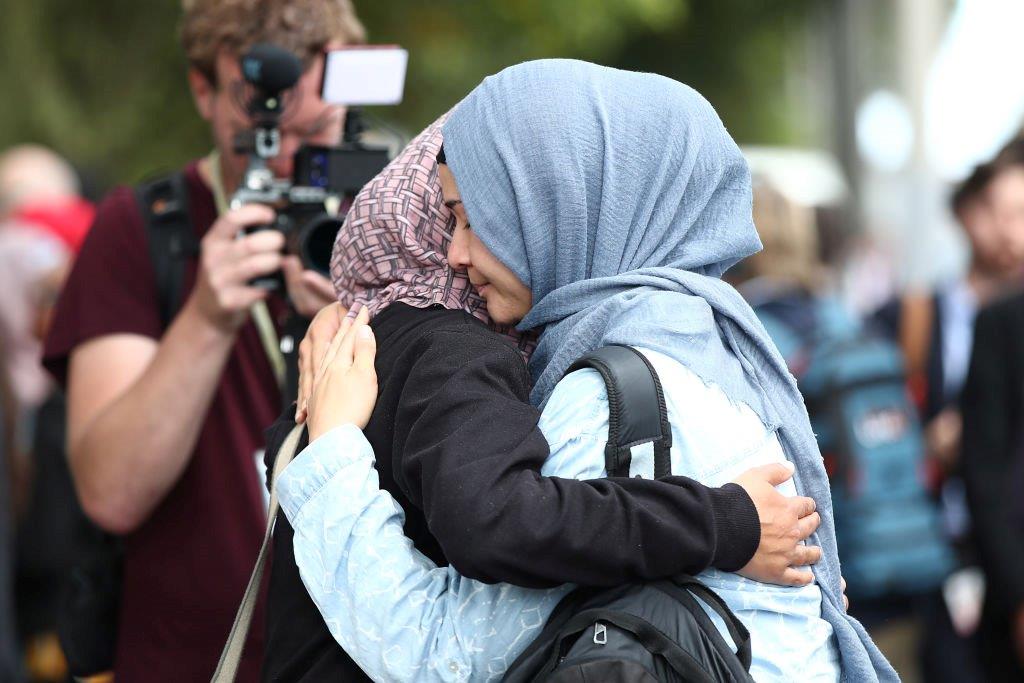 New Zealanders are in a state of stunned shock and grief, one day after the horrific terrorist attacks on two mosques in Christchurch.
Getty Images

The Prime Minister added the immediate focus for the victim’s families was to bury the dead in accordance with Islamic custom.

“There is a prime suspect and perpetrator of this attack but the police are ensuring that they include an investigation to give assurance that there are no ongoing threats to the people of Christchurch or New Zealand," she said. Members of local bikie groups gather in Christchurch to pay their respects at a support centre for the Muslim community. (Getty Images)
Getty Images

“They are assisting to repatriate them (families) with their loved ones in a way that is consistent with Muslim faith while taking into account these unprecedented circumstances and the obligations to the coroner,” Ms Ardern said. 'An attack on all of us': Morrison, Ardern condemn extremism after attacks

‘Not the New Zealand they know’

Ms Ardern visited a local mosque to reach out to the Muslims communities, and flagged an immediate change to New Zealand’s gun laws.

“This is not the New Zealand they know,” she said. Asked how it felt to be in the same building as the accused mass murderer, Ms Ardern was unflinching in her response.

“I’m also in the same building as the people bringing him to justice,” she said.

Tarrant has been charged with one count of murder, but NZ Police say further charges will be laid.

He now remains in custody, remanded after a brief court appearance at Christchurch district court on Saturday. He will appear at New Zealand’s High Court on April 5. 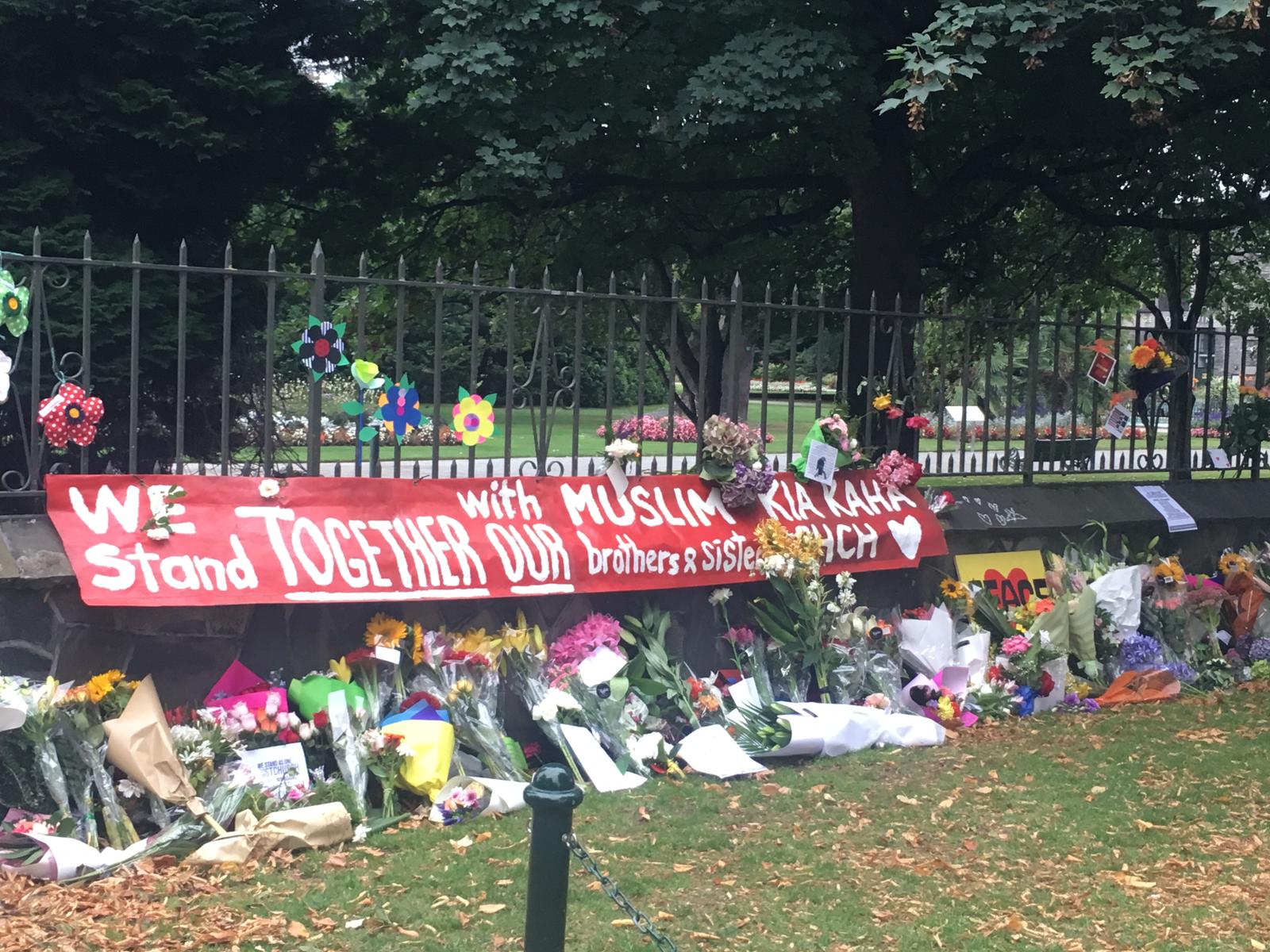 Messages of support near the Al Noor mosque.
SBS News

Ms Ardern confirmed Tarrant was arrested 36 minutes after the initial call came in to police on Friday. ‘Peace and love will triumph’

“We’re cousins, we and New Zealand,” Prime Minister Scott Morrison said after meeting with Muslim leaders including the Grand Mufti in Western Sydney.

"Hatred and intolerance. This is the root of all extremism and terrorism.” Mr Morrison echoed calls for unity, and urged Australians not to react to the massacre with hatred and division. 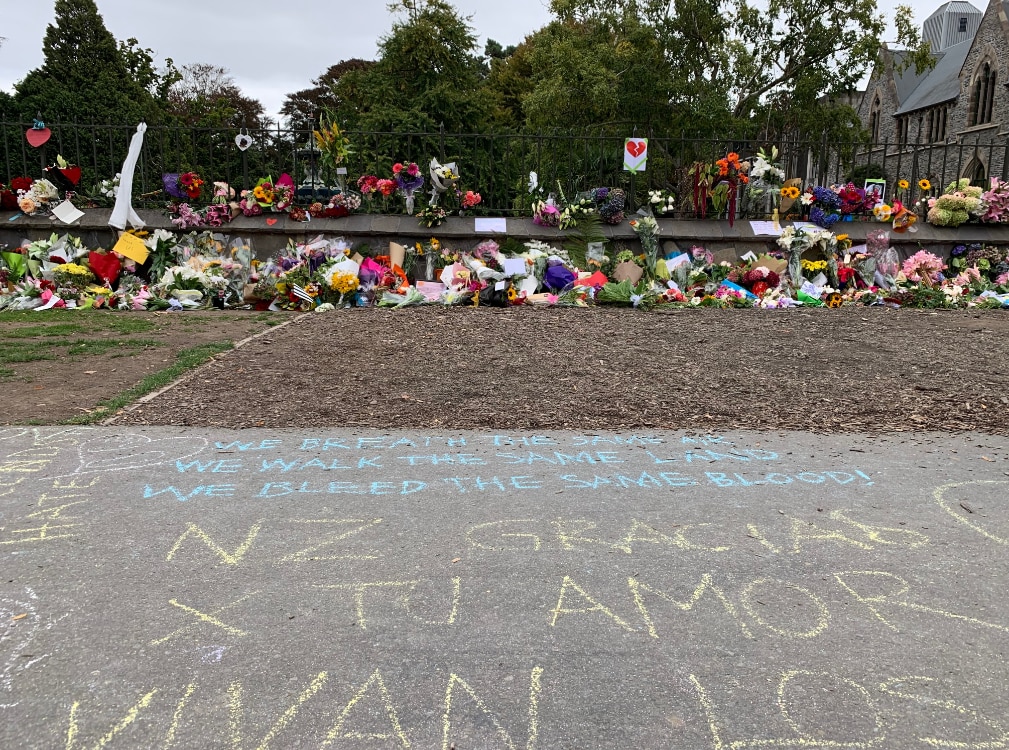 Mourners write condolence messages in chalk along the footpaths in Christchurch.
Laurie Lawira.

“Its intent was to provide some sort of sick leadership to others who share those views, and what we say today is no. No. Peace and love will triumph.”

New Zealand's Police Commissioner Mike Bush said Australian and New Zealand intelligence agencies are working closely together to “form a picture” of Tarrant’s activities prior to the attack, and what led to the massacre.

“Police are working to build a picture of this tragic event. A complex and comprehensive investigation is under way,” he said.

“Our people are working very closely, as is the intelligence agencies.”