Roof workers repairing the roof and spire of Notre-Dame Cathedral before it went up in flames have admitted to flouting smoking bans.

A scaffolding firm that has worked on the roof of Notre-Dame said some of its workers had smoked on the site, but ruled out that a cigarette butt might have started the fire that destroyed the cathedral’s oak-framed roof last week.

A spokesman for family-owned Le Bras Freres, confirming a report in French weekly Le Canard Enchaine, told Reuters that some workers of its Europe Echafaudage scaffolding unit had informed police that they had “sometimes” smoked on the scaffolding, despite a smoking ban on the site. Notre Dame cathedral burning in Paris on 15 April, 2019. Workers have confirmed they smoked on the job during the restoration.
AAP

“We condemn it. But the fire started inside the building... so for company Le Bras this is not a hypothesis, it was not a cigarette butt that set Notre-Dame de Paris on fire,” Le Bras Frères spokesman Marc Eskenazi said.

The Canard Enchaine reported that police had found the remains of seven cigarette butts in the burnt-out cathedral.

“This is not wrong,” said a source close to the investigation, who declined all other comment.

Eskenazi said it was impossible to set a log on fire with a cigarette butt and questioned how cigarette butts could have been found on the site. 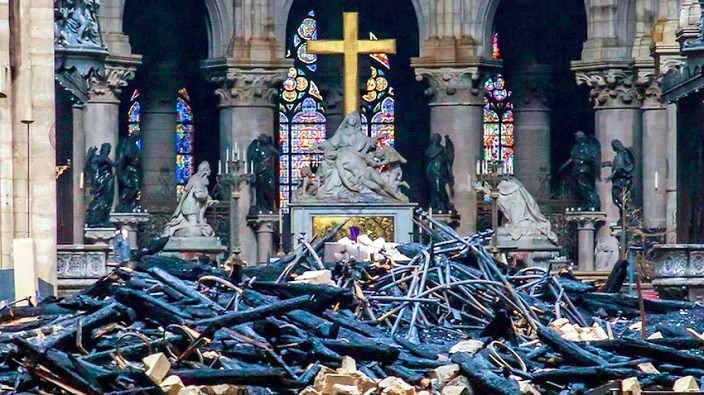 The gutted interior of the Notre-Dame Cathedral after the blaze.
AAP

“If cigarette butts have survived the inferno, I do not know what material they were made of,” he said. 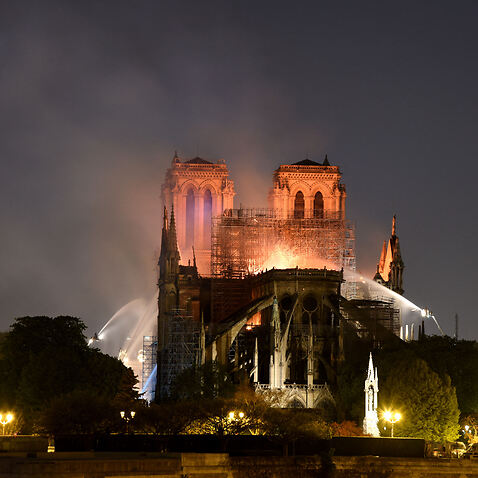 Europe Echaffaudage also ruled out the possibility that the fire might have been started by an electricity incident at one of the two lifts on the site.

“The lifts’ electricity was perfectly within specifications and well maintained,” he said.

He added that the two lifts were on the outside of the building, situated at 45 and 65 meters (71 yards) from the base of the spire, where the first smoke and flames had been spotted and that the workers had cut the power to the lifts at 1750 when they had left the site for the day.

The Canard Enchaine also reported that electrical wiring ran through the roof of the cathedral, but the church administration denied that safety norms had not been respected.

“Nothing was ever done without the authorization of the state...There were no wires dangling, everything was properly installed,” Notre-Dame spokesman Andre Finot said.

In 2012, electrical engines had been installed to sound the bells in the spire.

Finot said that when a first smoke alarm rang, security staff had made verifications but had not remarked anything unusual.

“I don’t know whether they might have checked the wrong place,” he said. He added that when a second alert rang shortly after, they spotted flames at the base of the fire. The Paris prosecutor’s office said that it is not ruling out any hypothesis about the origin of the fire and that investigators are considering all possibilities.

President Emmanuel Macron has pledged that Notre-Dame will be rebuilt within five years.

The cathedral was built over nearly 200 years starting in the middle of the 12th century, but the spire on its roof was added during a 19th century restoration.

Arrests, looting in second day of angry US protests against George Floyd's death in custody