NSW Labor is calling for domestic air travellers entering the state from Victoria to be subject to mandatory hotel quarantine.

NSW Health Minister Brad Hazzard says there are no plans at this stage to require air travellers from Victoria entering the state to undergo mandatory hotel quarantine.

NSW opposition leader Jodi McKay is urging the state government to put tougher restrictions on air travel from Victoria to "prevent another Ruby Princess", as people in Melbourne undergo a six-week Stage 4 lockdown to drive down the number of COVID-19 cases. 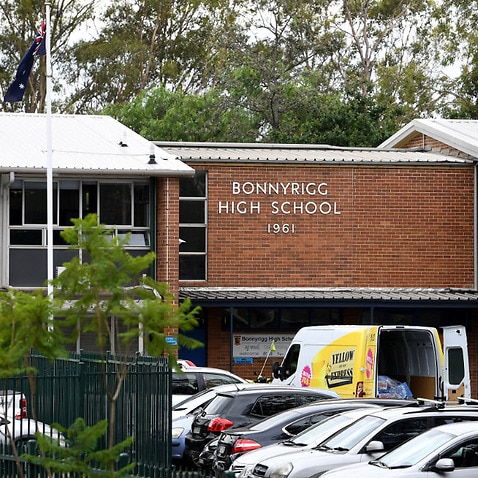 Another 12 people diagnosed with coronavirus in NSW, schools closed for deep cleaning

Mr Hazzard said there has been "good compliance" with the state's public health order requiring domestic travellers to undergo 14 days of self-isolation in their homes, as opposed to the stricter hotel quarantine conditions for overseas travellers.

"The short message to Victorians is you shouldn’t be coming to New South Wales, unless you have a particular permit entitlement," he told reporters on Tuesday.

"What we’re finding with most of our visitors into our state, returning travellers, if they’re asked to self-isolate, they do." 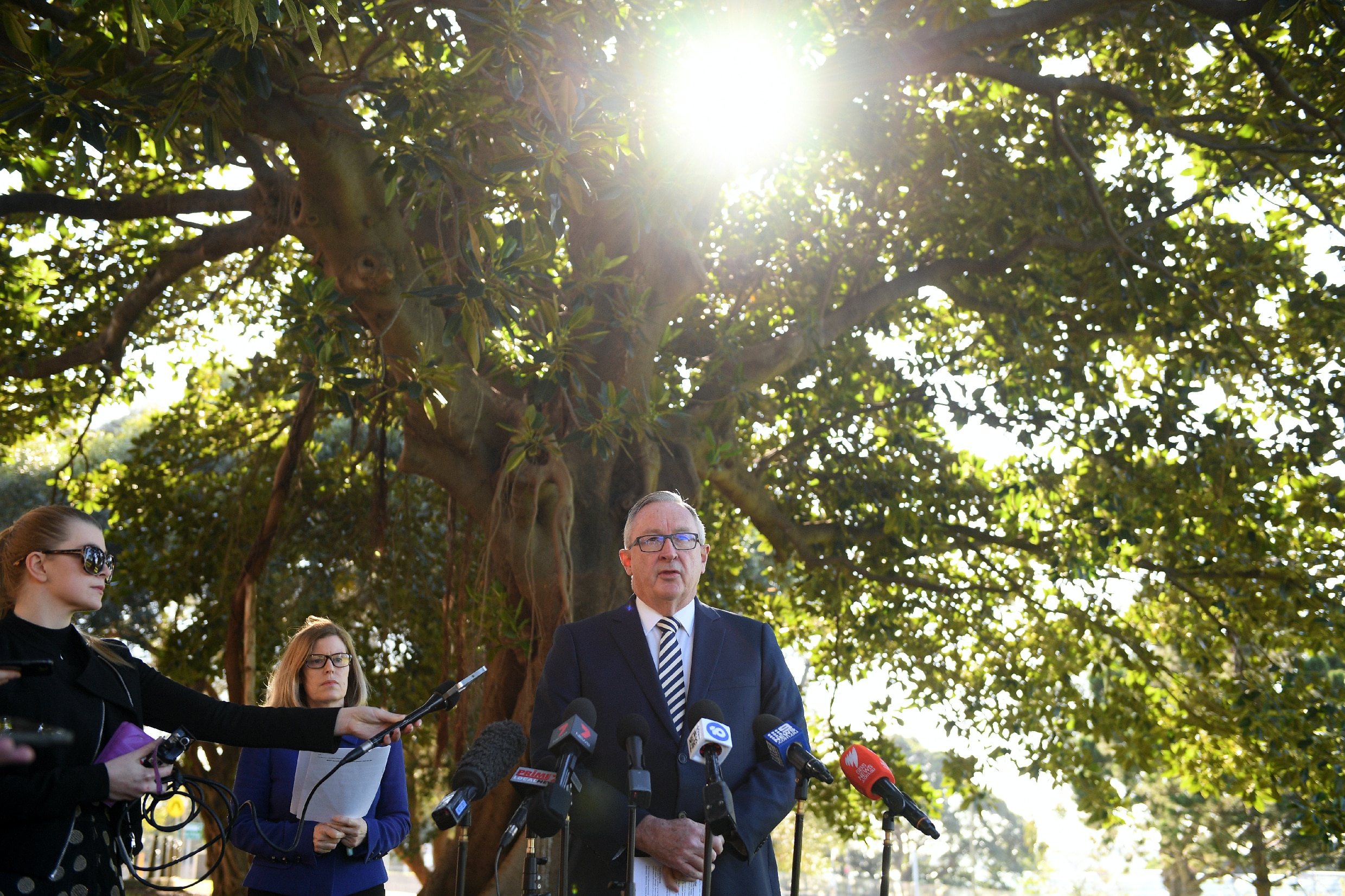 NSW Health Minister Brad Hazzard says there has been effective compliance with the self-isolation requirements for air travellers entering NSW from Victoria.
AAP

Mr Hazzard acknowledged there were a "miniscule number" of people who have not been compliant with mask-wearing and other health directives, and said he would consider putting other health orders in place if necessary.

NSW Chief Health Officer Dr Kerry Chant said procedures are in place to isolate travellers at the airport, if they test positive based on a swab test.

"We wouldn't be sending that person home in an Uber.

"It could be they go to the health hotel until they get the test result," referring to the special health accommodation set up by the Sydney Local Health District in March for people who were unable to self-isolate at home.

The state Labor leader said the high caseload in Victoria necessitates the same mandatory quarantine restrictions that apply to overseas returned travellers to apply to domestic air travellers from Victoria.

"We want mandatory quarantine for every single person coming in from Victoria for the next six weeks while Victoria is in lockdown."

Of the 17 flights listed for arrival at Sydney Airport from Melbourne on Tuesday, 14 have been cancelled.

Between 12 May and 21 July, five flights landing in Sydney - from Melbourne and Brisbane - were identified as having positive COVID-19 cases on board, although the majority of positive cases have been found on international flights.

Overseas arrivals in Sydney have been capped at 350 passengers per day from 20 July to "protect our state from COVID-19", Ms Berejiklian said.

'Restrictions not applied to air borders'

Ms McKay said more needs to be done to contain the risk of the virus spreading from Victoria.

"We have a situation in New South Wales where the land borders have been closed, but the same restrictions have not been applied to our air borders.

"We are seeing flights come in on a daily basis. There are hundreds of people coming into Victoria from New South Wales who we trust are isolating in their homes for two weeks."

Despite the NSW-Victoria border closure, which came into effect on 7 July, domestic flights continue to operate between Victoria and New South Wales "to allow people with exemptions and returning NSW residents to travel", Sydney Airport said.

The border closure means those seeking to enter NSW from Victoria must undergo 14 days of mandatory self-isolation. Only those who meet the special criteria for exemptions can apply for a border entry permit through Service NSW.

Upon arrival at Sydney Airport, travellers are met by NSW Police officers and NSW Health staff to inform them of the public health order requirement to immediately go into mandatory self-isolation. Breach of this requirement attracts an $11,000 fine and six months jail time.

Ms Berejiklian has said she is considering applying further restrictions to the land border between New South Wales and Victoria.

"That is what is at stake here in NSW. Let’s not sleepwalk into disaster. And that is my fear because the Premier won’t act."

The Ruby Princess ship has been linked to 22 deaths and almost 700 coronavirus cases nationwide, after it docked in Sydney on 19 March.

'NSW is on a precipice'

“We don’t know how many people are actually doing the self-isolating when they arrive,” she told the ABC’s Q+A show on Monday.

“We know there are thousands of active cases in Victoria, there could be up to 10 times as many people who are infected who don’t know it and we’re just letting people get on planes without having a test before they get on the plane, arriving in Sydney and dispersing into the community. 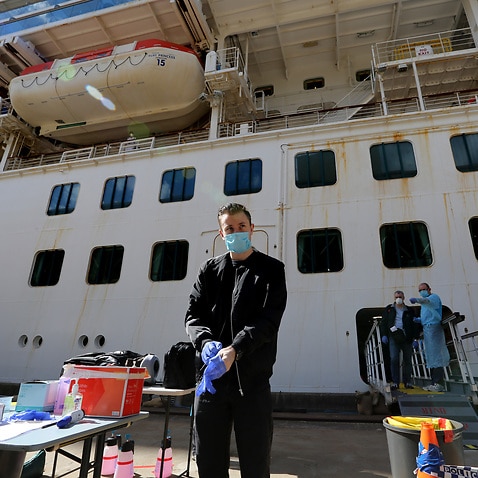 “NSW is on a precipice and unless we take it seriously and actually have an effective closed border, we are going to see leakage of these cases from Victoria over to NSW.”

But Australia's deputy chief medical officer Dr Nick Coatsworth said he believes the measures in place are adequate to reduce the risk of the virus spreading between Victoria and New South Wales.

"Provided those people (coming from Melbourne flights) stay in home quarantine then that risk is mitigated," he told Channel Nine's Today show.

The chief executive officer of the NSW Taxi Council, Martin Rogers, said he had concerns about the risk to older taxi drivers who are allowed to transport air travellers from Sydney Airport to their destination for self-isolation.

"We are looking at taking advice from ... NSW Health about what it means to convey a passenger safely," he told Sydney radio station 2GB.

Mr Rogers said taxi drivers are in difficult position because it is illegal for them to refuse a fare.

"We would like to see passengers consider their isolation starts at Melbourne Airport. They are wearing a mask at the airport, they should keep wearing that mask [until they reach their place of self-isolation]," he said.

Workplace regulator SafeWork Australia and NSW Health advise taxi drivers to adopt COVID-safe measures such as asking passengers to sit in the back seat of the vehicle, handle their own luggage where possible and use contactless payments.