Rivers are bursting their banks, dams are overflowing and many NSW residents are on stand-by to leave their homes as heavy rain continues to pelt the state.

Riverbanks have burst, dams are spilling over, roads are cut and residents are on alert for evacuation as NSW faces its worst rain event in about three decades.

Vision of entire homes adrift in floodwater, cars inundated and people forced to evacuate their homes in tinnies were circulating on social media on Saturday, when major flooding hit parts of the state.

Premier Gladys Berejiklian told residents to be ready to leave their homes on the mid-north coast, the Hunter, the Central Coast, metropolitan Sydney and the Warragamba Dam catchment area.

"This will be a deep-seated, extreme weather event ... It's not going to be an easy week for us," she told reporters on Saturday.

"None of us are out of the woods while the storm front is moving south. The rain may not stop until Thursday or Friday. I hope those predictions are wrong." 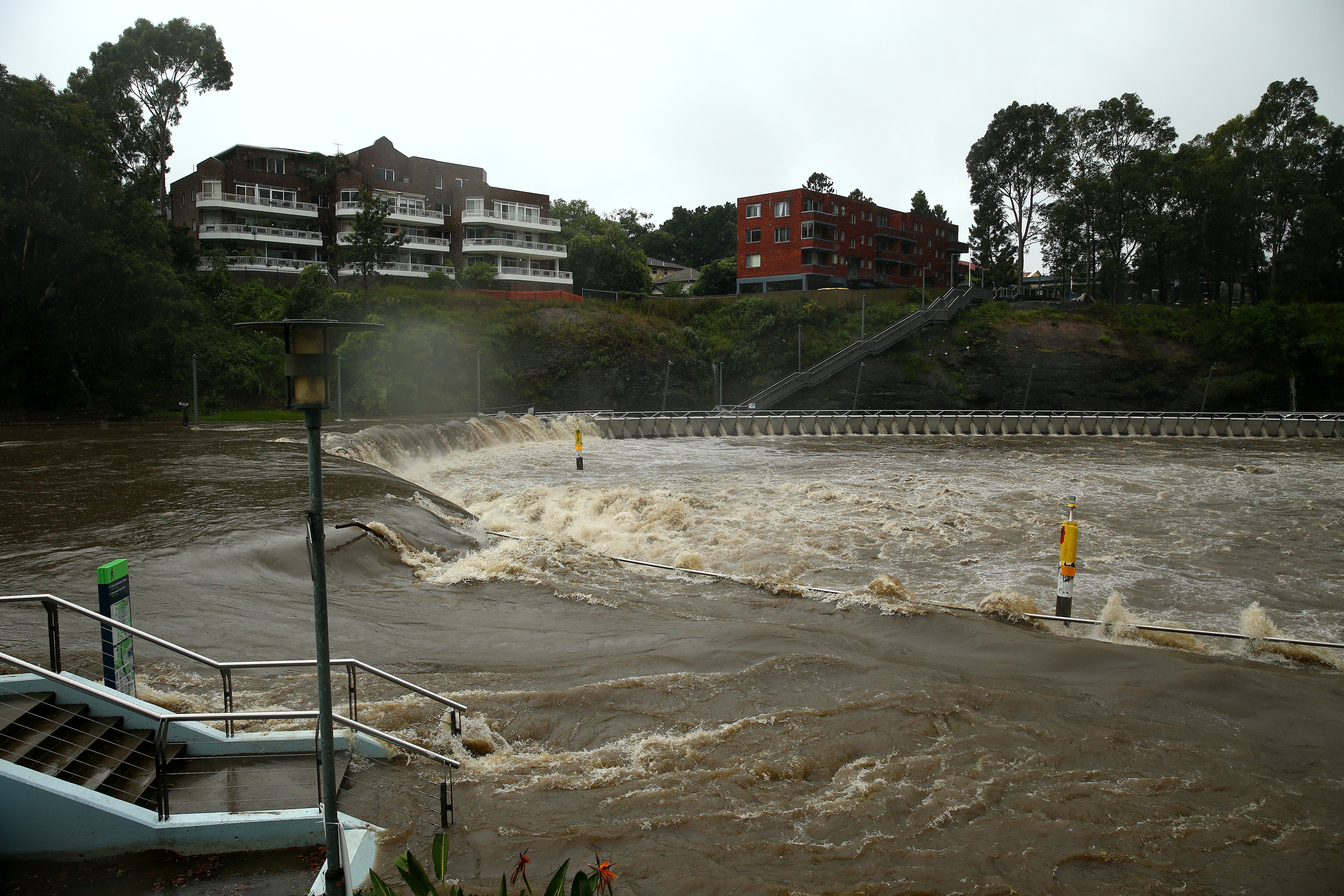 For NSW residents not in immediate danger, the premier urged them to restrict their movements and heed all warnings.

Nine evacuation centres are open in NSW - seven on the mid-north coast and two in the Hunter region.

"That's 500 crews that have put their lives at risk because people have not heeded the warnings," he said. Warragamba Dam, the Sydney's main reservoir, began overflowing mid-afternoon on Saturday and the spill was expected to increase into Sunday, Water NSW said.

Ms Berejiklian said she had been briefed on the dam situation "in relation to a potential for a one and five year, one in 10 year, or one in 20 year event".

"All three scenarios are being planned for," she told reporters on Saturday.

Other dams such as the Nepean, Cataract, Cordeaux and Avon were also expected to reach capacity and begin spilling on Saturday.

The lower Blue Mountains was forecast to see the worst of the rain on Saturday and into Sunday.

The Nepean River, the Colo River and the Hawkesbury were breaking their banks on Saturday.

The SES said major flooding was possible at North Richmond, Windsor and Sackville, from late Saturday, with the Hawkesbury River to reach a moderate flood level of 7.9m.

Concerns were focused on communities along the Georges River, an urban river in the city's south, and on the Hawkesbury/Nepean river system to the north and west of Sydney.

"We've got multiple flood warnings impacting coastal rivers all the way from the top of the mid-north coast ... all the way down into the Sydney region."

River systems on the mid-north coast that had already flooded communities were expected to cop more rain on Saturday night and on Sunday, as Sydney's river systems swelled dramatically.

Senior BOM climatologist Agata Imielska on Saturday said greater Sydney could expect about 100mm of rain during the next 24 hours, but the lower Blue Mountains is expected to get 200-300mm.

The band is moving down from the Kimberley and will reach eastern NSW from Monday night, when it will "link up" with the slow-moving coastal trough that is causing the flooding in NSW.

"That's when we'll see a very large burst of rain, across eastern NSW, dipping into northeastern Victoria and southeast Queensland from Monday night into Tuesday," meteorologist Jonathan How told AAP.

Morning friends, well my house and property got completely flooded yesterday and we had to evacuate by swimming 400m to the road with my two dogs in 1.2m of water. Have pretty much lost everything except my laptop and phone. Hope everyone else is safe?#floods #midnorthcoast pic.twitter.com/6fOp0qswPA

Parts of Port Macquarie, and several nearby towns, have flooded. Evacuation orders are in place in many locations including Port Macquarie and Kempsey.

Further south, Taree is in the grip of a flood rivalling its worst event on record, 92 years ago.

The Manning River at Taree was expected to peak at 5.8 metres later on Saturday, higher than the 1978 and 2011 floods and close to the record flood level of six metres in 1929.

One house on the river was swept away on Saturday, with Lyle Edge saying in a GoFundMe appeal that his brother had lived in the home with his partner.

Incredible, but devastating footage of a house floating down the Manning River at Taree.🎥Tanya Cross #NSWfloods pic.twitter.com/KTggPpvlWO

They should have been getting married on Saturday, but instead they’ve been left homeless and their pets have died.

At Kendall on the NSW mid-north coast, a record 405mm has fallen. At Kindee Bridge, inland from Port Macquarie, 160mm fell in just three hours.

In western Sydney, a “mini tornado” ripped through the suburb of Chester Hill, tossing trees, ripping off roof tiles and spearing a trampoline into the side of a house. 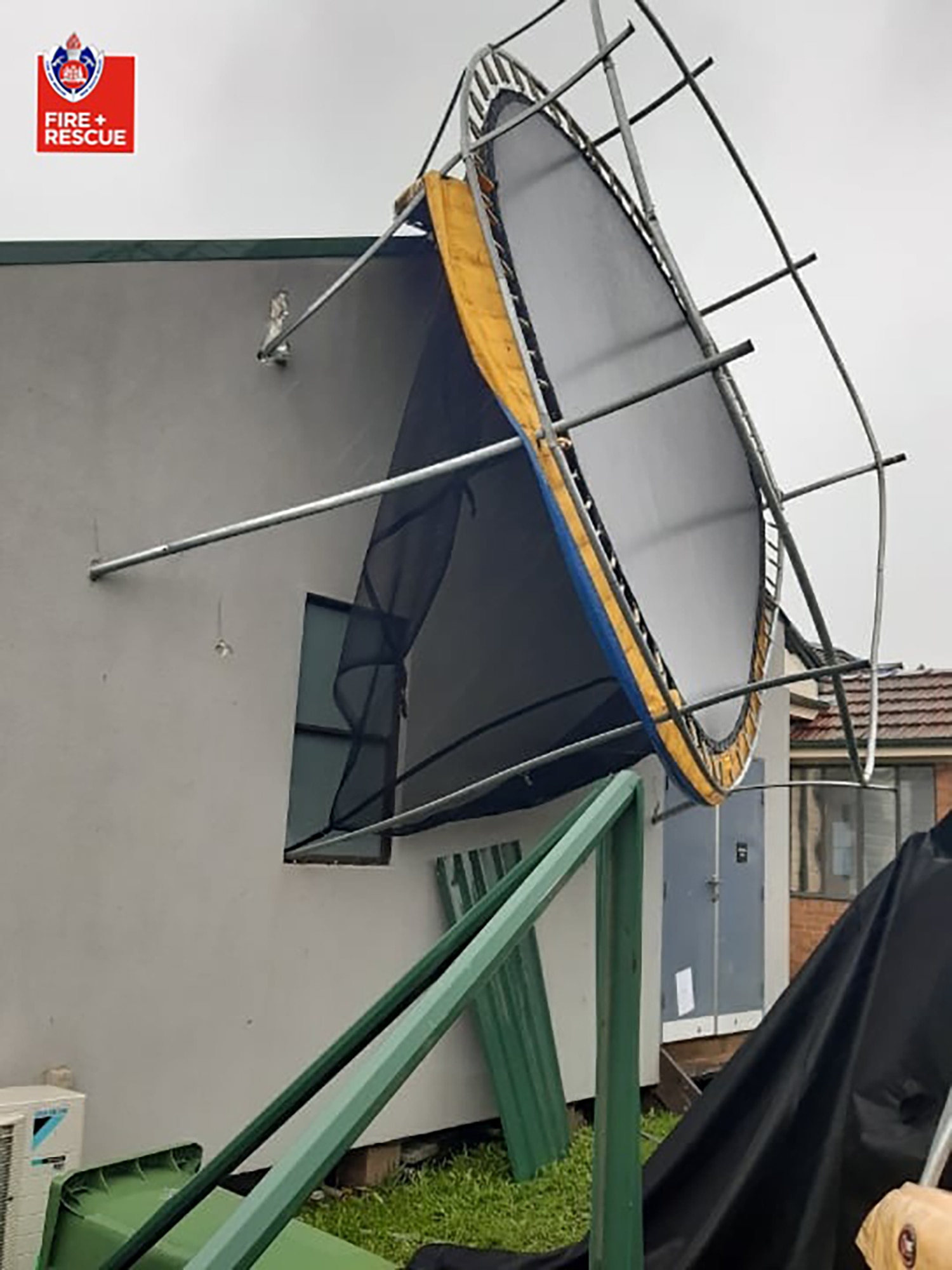 A supplied image obtained on Saturday, 20 March, shows a trampoline stuck against the side of a house in Chester Hill, Sydney.
FIRE AND RESCUE NSW

NSW SES Commissioner Carlene York said the tornado had affected three streets when it hit at 9am, and left 1000 properties without power.

“I hope it won’t happen again, it is an unusual event but that doesn’t mean it can’t happen again. It is very difficult to prepare for such a spontaneous, significant weather event,” she told reporters.

Prime Minister Scott Morrison has received a briefing from Emergency Management Australia on the situation and said the scenes across NSW were "absolutely heart-breaking".

"The federal government stands ready to provide whatever assistance is needed, including from the ADF," he said on Facebook.

The Public Information and Inquiry Centre provides information about the severe weather at any time of day on 1800 227 228.