Twenty-eight people remain unaccounted for in Victoria as a massive evacuation effort continues.

The number of people missing in Victoria has risen from 17 to 28 people as catastrophic bushfires continue to tear through Victoria's east.

Premier Daniel Andrews on Friday said 28 people were unaccounted for and two people confirmed dead from the East Gippsland fires.

"Of course, we have grave fears for the safety and wellbeing of those 28 people who cannot be located," Mr Andrews told reporters on Friday morning. 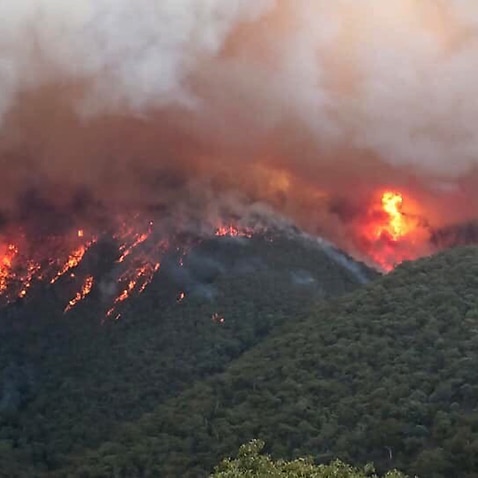 'We simply cannot guarantee your safety': Second death confirmed as Victoria declares a State of Disaster

He said a number of people who were among the 17 people originally listed missing had been located.

"There's been some other people who we've not even been able to necessarily determine as being missing who have never made it onto a list, but have become known to family and friends only very recently, after a period of absence. "These numbers will move around. That's the nature of a very dynamic fire ground."

A State of Disaster was declared for Victoria's East Gippsland region late on Thursday, giving authorities the power to force people to evacuate.

"If you can leave, you must leave. If you don't, we simply cannot guarantee your safety," Mr Andrews said.

While police have the power to compel people to leave, Victoria Police Chief Commissioner Graham Ashton said they won't arrest people who refuse to go.

"We're not going to be dragging people down the street, forcing them to leave," Victoria Police Chief Commissioner Graham Ashton said.

These fires are unprecedented.

And so tonight, we are taking the unprecedented step of declaring a State of Disaster in Victoria.

This is not a decision we've taken lightly.

But the dangers are real and we need to act now.https://t.co/spX555F96j

A second person was confirmed dead on Thursday after a man's body was found at a property in Maramingo Creek, near Genoa, by family on Wednesday evening.

"It is believed the man suffered a medical episode while fighting the fires," Victoria Police said in a statement.

Mount Buller, Mount Hotham and the Mount Stirling Alpine Resorts are also covered by the order.

The military is assisting in the evacuation of thousands of people stranded in the far eastern town of Mallacoota after fires ripped through on Monday.

Last night I joined Minister Neville when the Premier declared a State of Disaster for local government areas in the north east and east of our state for the next 7 days. It‘s a strong message - we don’t want you to be in these areas tomorrow. Listen and leave today. Take care pic.twitter.com/0GlZsLzbnM

About 1000 were expected to be brought out via sea on Friday morning, with more to follow.

"These are unprecedented times. This is a fire season of firsts," Mr Andrews said.