A new government regulation was enacted today which forces oil companies' environmental plans to be made public for consultation before they are approved.

A new government regulation which was enacted today forces oil companies' environmental plans to be made public and undergo a 30-day consultation period before they are approved.

Oil and gas companies' environmental plans previously did not require public consultancy and simply had to be approved by the National Offshore Petroleum Safety and Environmental Management (NOPSEMA). But Greens federal election candidate for Newcastle, Dr John Mackenzie, told the Newcastle Herald that a 30-day consultation period is “insufficient” to protect the marine environment and prevent threats to local fishing and tourism industries.

A Norwegian oil company, Equinor, submitted their environmental plan for drilling in the Great Australian Bight yesterday - which Greenpeace stated would be illegal in Norway.

In their statement yesterday, Greenpeace said that Equinor’s own modelling of a worst case scenario oil spill would contaminate iconic Australian shores including the Great Ocean Rd, the Twelve Apostles, Kangaroo Island and Bondi Beach.

The environmental organisation also stated in their accompanying report that Equinor has had 10 chemical, oil or gas leak incidents over the past three and a half years. Asset Energy, a wholly owned subsidiary of Advent Energy, has also proposed plans for seismic testing off Newcastle and the Central Coast this year in PEP11 (Petroleum exploration permit 11).

MEC Managing Director Deborah Ambrosini announced the company’s development of the environmental planning process for over 1000 square kilometres of 3D seismic data retrieval, in a February statement to ASX.

“The benefits of additional data acquisition include the potential for interpreting additional natural gas resources to those previously identified,” Ms Ambrosini said.

MEC Managing Director Deborah Ambrosini’s February release stated that Asset Energy is expected to submit its environmental plan for 3D seismic testing off Newcastle during the first quarter of 2019, despite the new government transparency regulation.

Advent Energy director Matthew Battrick said that he was unable to provide an updated statement due to an incomplete environmental plan that has not yet reached public consultancy.

But there were widespread protests to the 2D seismic testing in the region last year.

The new plans for seismic testing have also received considerable backlash from environmental groups, locals and fisheries who oppose the testing’s environmental degradation. Protest against seismic testing in Newcastle
Save Our Coast

What is seismic testing?

Seismic testing involves airgun blasts every 2-3 seconds for 24 hours and can occur uninterrupted for days or weeks.

Seismic testing uses powerful noises from the blasts to penetrate the ocean floor and retrieve data that is required for companies to locate oil deposits for extraction.

The backlash to seismic testing

Thousands of individuals have rallied in Newcastle to protest against the plans for seismic testing in the region.

New Zealand banned seismic testing last April as part of their goal to transition towards a carbon-neutral economy by 2050.

Save Our Coast has been the leading organisation in community protests against seismic testing in the Newcastle region over the past 14 months.

The Founder of Save Our Coast, Dr Natasha Deen, is outraged by the Federal government's imposition and lack of community consultation on the plans.

”The community is shocked to discover that our coast, that we are deeply connected to, has been opened up for offshore fossil fuel mining,” Dr Deen said.

Dr Deen said there is a lot of scientific evidence of the devastating impact that seismic blasting has on the marine ecosystem.

"It is known to kill plankton over 1km away, cause malformations in scallops, and harm marine life including turtles, penguins, dolphins and whales, impacting on the entire environment," Dr Deen said. “With the science around the negative impacts of seismic testing getting stronger and stronger, it would be bizarre to give this consortium a remit to place Sydney and Newcastle’s marine life at risk," Mr Beshara said.
Mr Beshara also expressed opposition to such activities because of their continued reliance on environmentally damaging fossil fuels and called on the Federal government to end fossil fuel exploration.
“It’s not a matter of opinion that we need to stop burning fossil fuels to prevent planetary devastation, it’s a matter of fact. And unless we intend to be self-destructive as a species, that means moving on from burning coal and gas for energy," Mr Beshara said. 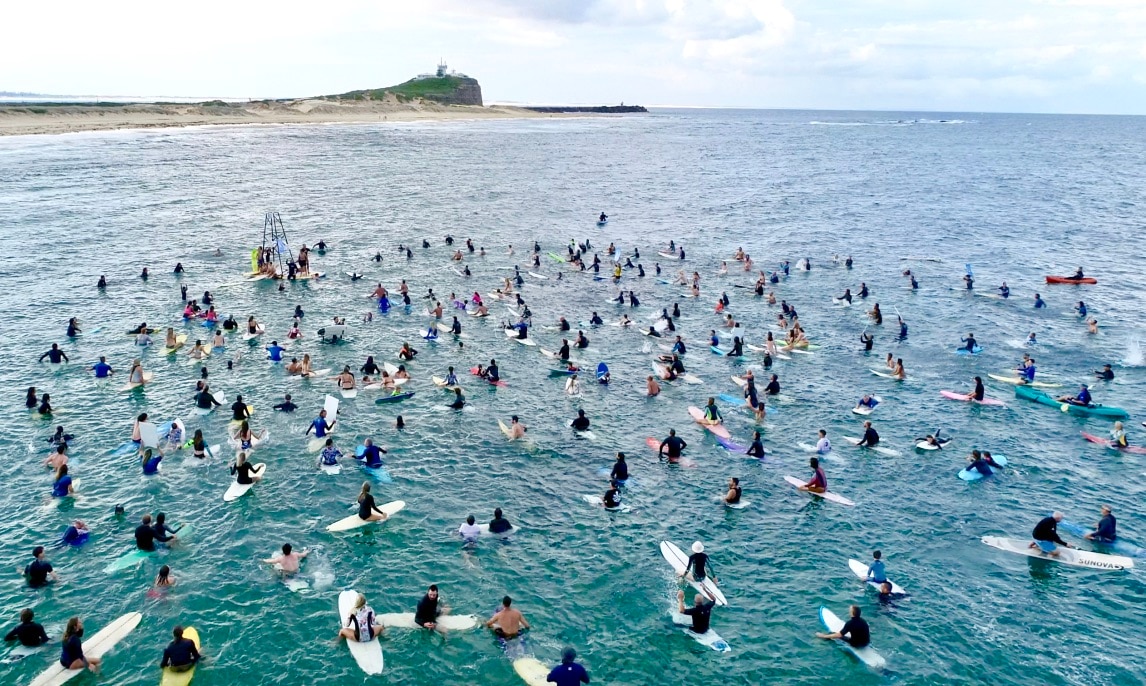 Paddleboard protest against seismic testing off Newcastle coast, organised by Save Our Coast, 14 April, 2019.
Save Our Coast

Marine environmental organisation Living Ocean raised awareness about the PEP11 seismic testing project by hosting a screening of the film Sonic Sea a few weeks ago, which explored the damaging effects of sound in the ocean.

"Any seismic testing at all is increasingly being shown to have damaging effects on the entire marine biotic spectrum," Living Ocean CEO and co-founder Robbi Luscombe-Newman said.

Mr Luscombe-Newman said that the rapid rise in alternative energy systems and the damaging effects in our oceans from fossil fuels means that such ocean activities must be urgently stopped.

"The integrity of our oceans is being threatened and the consequences are profound," he said.

Mr Luscombe-Newman also said that there appears to have been no studies at all conducted into the environmental baseline for all marine ecosystems in the PEP11 zone, which is a key concern for any development project.

Senator Faruqi told the Newcastle Herald that the extraordinary noise volume disrupts whale and dolphin communications and could kill smaller plankton, “unravelling the food chain and destroying the entire ecosystem”.

Senator Faruqi also feared the risk of vast oil spills from offshore drilling, if oil wells are located through seismic testing off the Newcastle coast.

“A leaked report modelling oil spills for a proposal to drill in the Great Australian Bight in South Australia has shown spills there would have national consequences, with oil contamination on beaches spreading all the way from Albany in Western Australia to Port Macquarie in New South Wales”, Senator Faruqi said. The fishing industry has also expressed strong opposition to the seismic testing plans.

Dr Deen described how there has been significant anecdotal evidence from fishermen around the world who note decrease catch rates after seismic testing and describe the practice as "an assault on their livelihoods".

“When I’ve gone out after they’ve tested, the nets have come out smelly, smelling of rotten seafood, not fresh seafood. It was like things had died," Mr Bollinger said.

Mr Bollinger felt disillusioned by the lack of interest for fisher's concerns under the bureaucracy of oil companies and the government.

"A couple of fishermen or fish docks don't seem to matter when it comes to gas and big business and government contracts. People get away with doing murder when it's over the ocean," he said.