The COVID-19 death curve lags about two weeks behind the daily case count, meaning there could be a sharp spike in deaths on the way as Australia this week recorded its highest daily infection count since the pandemic began.

That number is expected to now rise after Australia recorded its highest daily infection count since the start of the outbreak on Wednesday with 503 new cases.

Infectious diseases physician Professor Peter Collignon from the Australian National University estimates one death will occur for every 100 cases.

“Because we are probably better at finding cases than before, one per cent is an estimate, but it could be 0.7 per cent or it could be 1.4 per cent, we will be wiser as we have more cases, unfortunately.

“But also it is very age dependent, so if you mainly have 20 and 30-year-olds infected you will have a lower death rate than if it is mainly 70 and 80-year-olds.” Professor Collignon is the author of a study into the COVID-19 ‘fatality risk’ in Australia and South Korea.

The report, which was released in May, found deaths lag behind case confirmation by an average of 13.7 days in Australia and 15.1 days in South Korea.

That means it will likely be two weeks before there is news about deaths related to the recent infections. “The reason for that is you make a diagnosis and you know that people have got it, but then they get sicker, they get admitted to hospital, they’ll be supported in intensive care.

"Luckily in Australia, most people survive, but a certain percentage don’t... that always means there is a lag between the numbers diagnosed and the number dying.”

“It’s about a two-week, sometimes even a three-week lag period.”

The Victorian premier said three of the deaths recorded on Thursday were linked to aged care homes.

“I am very sad to have to report to you that 49 people have now died - that’s five additional fatalities due to this virus since yesterday,” Mr Andrews said.

A member of the public wearing a face mask in Melbourne on Thursday.
AAP

He has previously pointed out that many more elderly residents are at risk in the state.

“There are 45 aged care settings that have positive cases, there are 383 cases in connection, as for a breakdown I think it is 50/50 staff and residents,” he said on Wednesday.

But overall, the 20s and 30s age bracket in Australia has the highest infection rate and this trend is expected to continue as older more at-risk people are likely to take more precautions. Melburnians have been in lockdown for two weeks, so why are COVID-19 cases not dropping?

Associate Professor Sanjaya Senanayake from ANU says this behaviour has been replicated overseas.

“If we are seeing the pattern that they are seeing in southern states of the US, where there is a very large outbreak at the moment, they’ve noticed the age demographic is about 10 to 15 years younger with that second surge,” he said.

“This means that it’s less elderly people and less people at risk of a severe disease are getting infected, it's more healthy young people, so you may see less deaths.”

25 people on ventilators in Victoria

Of the133 deaths from COVID-19 in Australia so far, 39 have been connected to aged care facilities including 17 at Sydney’s Newmarch House.

The Ruby Princess cruise ship remains the largest cluster of coronavirus cases and deaths in Australia, with 20 deaths linked to the ship.

More than 200 people are currently hospitalised with the virus in Victoria and about 25 of those are on ventilators.

Australia has 7,000 ventilator beds across the country, so it is not likely that the hospital system will be overwhelmed at this point.

Professor James McMahon, who treats patients are The Alfred Hospital in Melbourne, said ventilators work by upping the oxygen supply to an infected person’s lungs.

“The primary organ that is affected, and that means people progress to dying, is the lungs,” he said.

“When we are well, we walk around, we breathe oxygen. Around 20 per cent of what we breathe in is oxygen and as we move that oxygen into our lungs and into our blood, it operates our body. 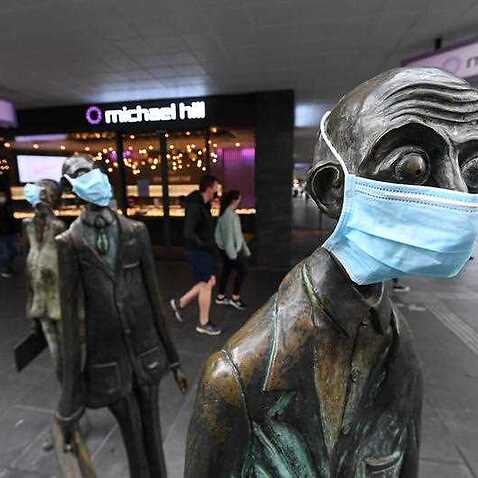 Why some Australians are rebelling against coronavirus face mask advice

“As the COVID infection affects our lungs we need more and more oxygen going into our mouth, down our throat and into our lungs, to be able to get that oxygen across into our bloodstream to operate our body.

“As the lungs get damaged, more and more needs to go down and the way you can get the most oxygen into someone’s lungs is to put a tube down their throat and put 100 per cent oxygen down the tube.”

Professor McMahon said people infected in this second wave have a higher chance of survival as treating doctors have had the opportunity to learn more about the virus and potential treatment measures.