Police have opened fire on a crowd of protesters in Myanmar, with witnesses saying one man was hit in the throat, as pro-democracy demonstrations continue.

Police in Myanmar have opened fired on protesters rallying against last month's military coup, killing one man, as international condemnation rains down on the junta.

The violence came as the junta lost a tug of war over leadership of its UN mission in New York and the United States unveiled new sanctions targeting military conglomerates after the deaths of dozens of civilian protesters.

Activists demanding the restoration of the elected government of veteran democracy champion Aung San Suu Kyi held more demonstrations in several towns and cities on Friday, with a crowd of thousands marching peacefully through the second city of Mandalay.

"The stone age is over, we're not scared because you threaten us," the crowd chanted. Later, police opened fire to break up the crowd, and one man was hit in the throat, witnesses said.

"I think he's around 25 but we're still waiting for family members," a doctor who examined the victim said.

In the main city of Yangon, police fired rubber bullets and stun grenades to disperse protesters who were joined by about 100 doctors in white coats, witnesses said.

A crowd also gathered in the town of Pathein, to the west of Yangon, a witness said. 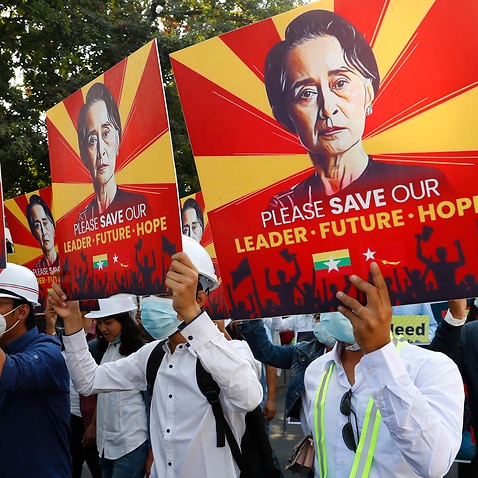 YouTube removed five channels of Myanmar's military-run television networks hosted on its platform in the wake of the coup in the Southeast Asian country.

"We have terminated a number of channels and removed several videos from YouTube in accordance with our community guidelines and applicable laws," a YouTube spokeswoman said in a statement.

The channels taken down include the state network, MRTV, (Myanmar Radio and Television) as well as the military-owned Myawaddy Media, MWD Variety and MWD Myanmar, according to the US tech giant.

On Thursday, police broke up rallies with tear gas and gunfire in several cities but their crackdown was more restrained than on Wednesday, when the United Nations said 38 people were killed in the bloodiest day of protests.

Bachelet said more than 1,700 people had been arrested, including 29 journalists.

A spokesman for the ruling military council did not answer telephone calls seeking comment. Adding to a sense of unease, electricity supplies were cut in many parts of the country on Friday. A utility official later said it was due to a system failure.

A clash over who represents Myanmar at the United Nations in New York was averted - for now - after the junta's replacement quit and the Myanmar UN mission confirmed that Ambassador Kyaw Moe Tun remained in the job.

The junta fired Kyaw Moe Tun on Saturday after he urged countries at the UN General Assembly to use "any means necessary" to reverse the 1 February coup.