More than 4,500 same-sex weddings have taken place since same-sex marriage was legalised, but challenges remain for queer Indigenous Australians.

One year on from the historic legalisation of same-sex marriage in Australia, queer Indigenous activist Edie Shepherd says while there have been steps forward, the battle for acceptance still continues.

Thursday will mark 12 months since a majority of Australian voters - 61.6 per cent - said 'yes' to legalising same-sex marriage.

Three weeks after the result, parliament formalised the outcome by passing the Marriage Equality Bill, ending decades of struggle for same-sex marriage advocates. 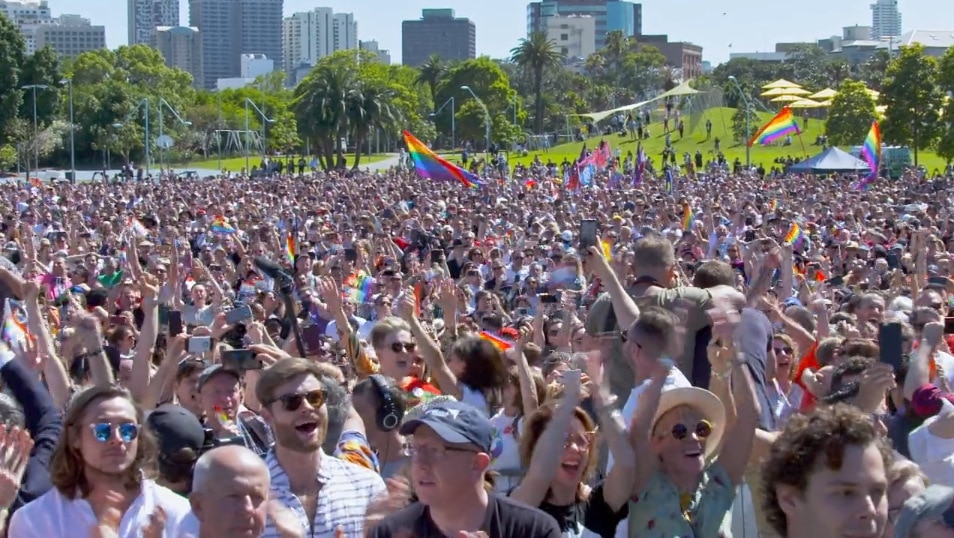 For Ms Shepherd, a proud Ballardung and Wiradjuri woman, and founder of Blackfullas for Marriage Equality, ensuring queer Indigenous Australians were a part of the history-making event was critical.

"There is often a real sense - especially when I talk to other queer blackfullas - that we don't exist, because there is this bizarre colonial mythology that same-sex attraction gender non-conformism is this white, western, modern concept, which is just absolutely not the case," she told SBS News.

Raised as a "gayby baby" by her mother and her mother's same-sex partner, Ms Shepherd said an awareness of the power of storytelling and representation was driven home. Edie Shepherd with her mother.
SBS

And it was during an informal conversation during a workshop she was running as a youth worker for Indigenous youths that the topic of the same-sex marriage plebiscite came up.

"We were sort of starting to really unpack all the layers about why it was upsetting. And some of the common themes coming up were: there is a real lack of representation. So we already knew that most public campaigning has a white face.

"That we don't have many queer Aboriginal people we can look at, to see. So we can see that we're not weird, and we're not alone, and we're not this bizarre anomaly in our community."

We don't have many queer Aboriginal people we can look at ... so we can see that we're not weird, and we're not alone.

Ms Shepherd said she had found representation was one of the best ways of improving mental health outcomes for Indigenous youth.

"We know that young LGBTIQ kids have some pretty dark health outcomes, as can young Indigenous folk. So the concept of those two identities intersecting ... you can't be what you can't see. And you can't define the narrative if you're not in it."

"It was terrifying. I was not scared of what was going to happen to me, in terms of discrimination and hate and all of that during the campaign. But it was about what it was going to do to our young mob."

It was not long after that Blackfullas for Marriage Equality was formed, attracting 1,000 followers on Facebook in three days.

Weeks of negative campaigning followed, including hate mail on Facebook, some of which is captured in the upcoming SBS documentary Australia Says Yes, in which Ms Shepherd features.

"We got angry messages: 'You're going to hell'."

That culminated in results day, when Ms Shepherd found herself standing outside the State Library of Victoria with Yes campaigners awaiting the results of the postal vote.

She described the nervous anticipation as being like the night before Christmas: "I know that this is going to be fun and good. But what if the present sucks?"

After weeks of crunching the numbers, she knew what was needed to signal a yes vote, without waiting for the percentage to be read out.

"Once they said the number of people who voted 'yes', everything just sort of went blank."

The victorious yelling and hugging passed by in a blur, but there was a visceral feeling of relief.

"It was like I could feel all the muscles in my neck and shoulders just loosen. I remember that feeling through my neck."

The ink had barely dried from the parliamentary bill legalising same-sex marriage, before a flurry of same-sex weddings followed. More than 4,500 same-sex weddings have since been held, including some featuring Ms Shepherd's friends.

"It is very exciting, I finally get to go to weddings," she said, referring to her plans to be the maid of honour at an upcoming same-sex wedding.

Having achieved a Yes result from the plebiscite, the raison d'être for Blackfullas for Marriage Equality is still focussed on normalising the representation and voice of queer Indigenous Australians.

Ms Shepherd says she is heartened by the growing visibility of its population, particularly at iconic pride events, such as the Sydney Mardi Gras and Melbourne's Midsumma Festival.

"Queer blackfullas were at the front [of the parades] for the first time - and that's amazing," she said.

"That is something we haven't had before ... even just the acknowledgment of our existence is like a huge bloody step forward."

'We've been around for time immemorial'

Ms Shepherd said critics outside the Indigenous community accuse Blackfullas for Marriage Equality of promoting same-sex acceptance when they claim it goes against so-called Indigenous values.

"It is not a problem within our own communities. It is getting the rest of Australia to acknowledge, for a lack of better phrase, the queer lifeblood that runs through this country," she said.

"It is not something that came out 230 years ago when people [Captain Cook and his explorers] arrived. Some of our oldest rock art depicts same-sex couples, sistagirls and brotherboys.

"So the transgender community members, at least in my mob, hold really revered positions in our community and stuff like that. We've been around for time immemorial - and we're starting to get that acknowledged, which is really nice."

But, she says, significant challenges lie ahead for young queer Indigenous Australians.

"There has been some headway in terms of funding and some responses [for Indigenous youth mental health].

"But really at a fundamental level, there is still a lot of work that needs to be done, in terms of how Australia as a country navigates [its colonial past] ... the dignity it affords and treats Indigenous people with."

Australia Says Yes airs on SBS at 7.30pm on 15 November and will be available afterwards on SBS On Demand.